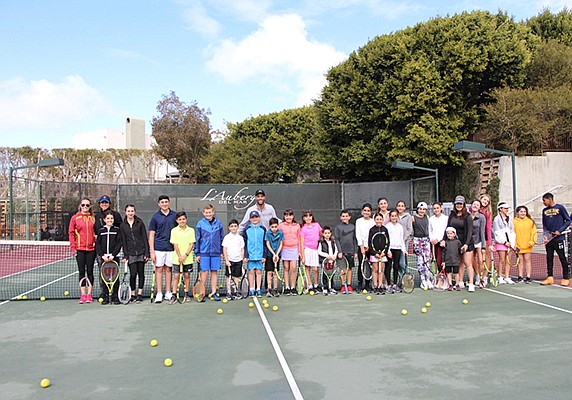 Love 15 Tennis hosted a fundraising ‘tennis fest and clinic’ to benefit a local student’s goal of raising funds to build a home for families in Mexico for the local nonprofit Build A Miracle. Photo courtesy of Love 15 Tennis

Three years ago, Benitez, a Notre Dame Academy student, had participated in the building of a home in Tijuana, Mexico, through the nonprofit organization, Build A Miracle, founded by Chris and Julianne North in 2001.

It takes $16,000 to take a family from living in a shack to a fully furnished home with running water, electricity, bedrooms, bathrooms, showers, a kitchen and a real roof. Benitez, then 12 years old, was so moved that she committed to head up the building of one home a year. Benitez is currently raising money for her third Build a Miracle project. The proceeds from the tennis clinic will benefit her team’s next build, as well as that of her 12-year-old brother, Gabriel Benitez, a seventh grader at Notre Dame Academy, who is heading up his second home.