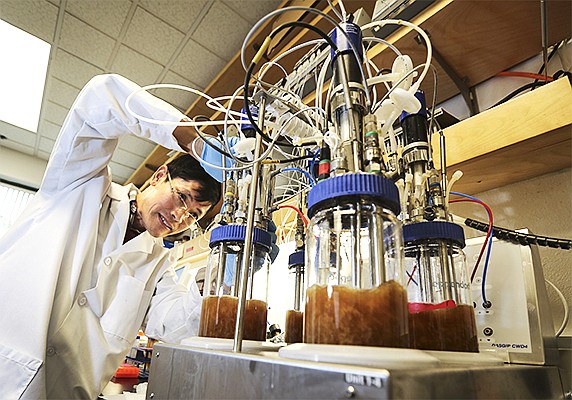 Company description: Synthorx developed a potential cancer drug based on technology that expands the genetic alphabet, among other preclinical programs. 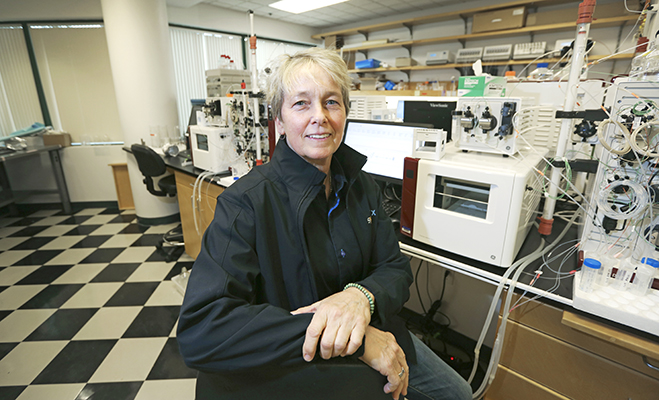 Laura Shawver, CEO of Synthorx, in the lab located in the incubator COI Pharmaceuticals. Synthorx recently raised $151 million through an initial public offering.

A drug approved in the 1990s boosts cancer-killing cells. But it can also wreak havoc on the immune system.

That’s where Synthorx comes in. The La Jolla-based biotech — fresh off a $151 million initial public offering — wants to tame what’s known as Interleukin-2, or IL-2, a space studied for decades.

The IL-2 drug aldesleukin, which got the green light in 1992, was initially viewed as a potential breakthrough cancer therapy. But it works in only a subset of patients — and triggers life-threatening side effects in many cases.

Formed in 2014, Synthorx’s approach to IL-2 is based on discoveries from Floyd Romesberg’s lab at Scripps Research. The science behind Synthorx motivated CEO Laura Shawver to come on board in 2017.

Her explanation of the company’s technology veered between high-level and in-the-weeds during a half-hour interview at COI Pharmaceuticals, an incubator housing Synthorx and others, headed by Avalon Ventures.

But throughout, she was impassioned, motivated she said as a biotech veteran attracted to good science.

“When I learned about how the Synthorx technology could reprogram IL-2 to keep the good and tune out the bad, I said, “Oh wow, this is a fantastic opportunity,” Shawver said.

For non-scientists out there, Synthorx’s platform expands the genetic alphabet. It does this by adding an artificial DNA base pair — X-Y — to the DNA bases that occur in nature: A-C and G-T. This process is used to create a special strain of bacteria that produces Synthorx’s lead drug candidate and version of IL-2, called THOR-707, which has shown promise in preclinical studies.

It’s designed to increase cancer-fighting cells, while cutting down on IL-2 toxicity.

“The end result is simple and elegant. But the process to get there is otherworldly,” said Shawver from a conference room in Synthorx’s old second-floor office in COI. The company recently moved into larger digs on the ground floor as it enters a new phase.

In the second quarter of 2019, Synthorx plans to ask for the OK to begin clinical trials of Thor-707. Synthorx aims to test THOR-707 in various tumors, both alone and in combination with an immune checkpoint inhibitor, which helps the body recognize and attack cancer cells.

Joshua Schimmer, a research analyst with Evercore ISI, said that Synthorx has a more compelling drug candidate than Nektar. He cited Synthorx’s expanded alphabet technology as a differentiating factor.

But he cautioned Thor-707 must still be validated in clinical trials, and the competitive space doesn’t leave Synthorx with much room for error.

“If [Synthorx] stumbles in development, it may lose ground to other players,” Schimmer said in a January research note. Nonetheless, he issued an outperform rating on the stock.

Analyst Biren Amin with Jefferies too sees promise in Synthorx. But he wondered whether the company could scale-up production of THOR-707, given the unique manufacturing process involving unnatural nucleotides and amino acids.

The company partnered on production for drug studies with Cytovance Biologics, which Amin pegged as progress.

“We believe the company has demonstrated progress in meeting expansion and scale-up objectives and are on track to continue that progress heading into human studies,” Amin said in a January research note.

The company in 2014 licensed Scripps Research’s work widening the genetic lexicon. The technology was developed by Scripps researchers, led by Romesberg, who is Synthorx’s scientific founder and a board member.

A milestone came three years later. Scripps researchers and Synthorx showed an expanded genetic alphabet could spark new therapeutics, per a paper published in the journal Nature. It marked the first time proteins were produced in a cell by decoding a six-letter genetic alphabet, instead of just the natural four-letter alphabet — a proof-of-concept, if you will.

“The technology, as a scientist, is incredible,” Shawver said. “When was the last time somebody made a new DNA base pair? Oh, not since the beginning of time.”

But how to apply this technology? Shawver saw the IL-2 space as a “fantastic, out-of-the-gate way to start and move into the clinic,” she said.

Synthorx has leveraged the technology for not only THOR-707, but other preclinical programs, including one for autoimmune disorders.

The company was founded by Avalon Ventures, which provides shared management for portfolio companies in COI. By 2017, Synthorx needed a full-time CEO.

Before the company, Shawver was the CEO of Cleave Biosciences, entrepreneur-in-residence for 5AM Ventures, CEO and director of Phenomix Corp., and president of Sugen.

She’s also known for launching the Clearity Foundation after her own experience with ovarian cancer. Through Clearity, ovarian cancer patients who have recurrent tumors obtain genomic information for deciding on a treatment path, like drugs that may be the most effective.

The 10-year-old nonprofit provides tumor blueprints, interpretation, and clinical trial identification free of charge. After going through cancer, Shawver is that much more passionate about biotech.

“I’ve always loved science and drug development. It just feels more like a calling to me now,” she said.

And, Synthorx has room to run.

In December, the company raised $151 million through an IPO, when factoring in the “greenshoe,” a clause enabling underwriters to buy up to an additional 15 percent of company shares at the offering price. That was preceded by a $63 million Series C round in April.

The company has 38 employees and growing. Shawver, who has lived in San Diego off and on since 2002, said back then, biotechs rarely got to the point of an IPO and multiple drugs in or headed for clinical trials.

“Now it’s the norm,” she said. Recently, Gossamer Bio went public, with several others in San Diego on deck.

But, clinical trial results will ultimately decide just how successful these companies are, Synthorx among them.