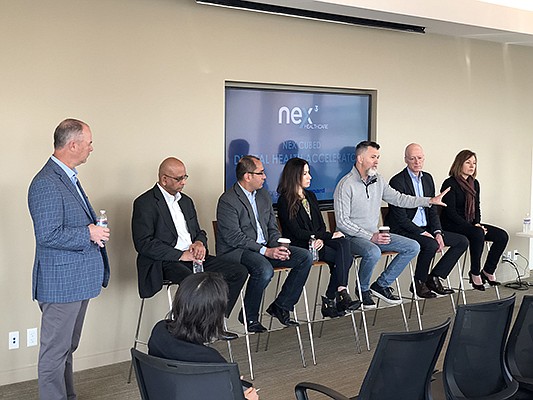 A new startup accelerator in San Diego welcomed its first cohort of startups in February. Seven companies from across the U.S. were picked for Nex Cubed’s first Digital Healthcare Accelerator, which accepts biotech and health care companies with a software component.

Parent company Nex Cubed is based in San Francisco. To date, it has graduated more than 250 companies, 30 of which have seen exits. It has also invested in three local companies: MedCrypt, NXT Robotics and Trials.ai.

In San Diego, Daniel Haders, an operating partner for Sway Ventures, is heading up the accelerator. Nick Phillips, a local entrepreneur and engineer, is program manager.

They hope the accelerator will help carry mid- and late-stage startups to their next milestone by pairing a small group of startups with targeted advisors. In the long term, they also hope it will attract promising digital health companies to San Diego.

Haders said they decided to cap the accelerator at eight or nine startups to be able to dig deeper with each company.

“It comes down to the quality of advisory services and mentorship that we can provide,” Haders said. “We’re not just focused on getting a demo day deck ready. … No matter where these companies are, the goal is to get them to the next commercial inflection point which drives them to their next financing.”

Collectively, this spring’s participants have raised more than $4.9 million before joining the accelerator. For most, Haders expects their next round of funding would take the form of a post-seed round or a Series A round.

“We do tend to cater to founders that have been around the block,” Haders said. “They realize how hard it is to do these things. That’s why they’re part of this program.”

In exchange for a 6 percent equity stake, participating companies receive $25,000 in cash, access to an 11-person advisory board, with members ranging from a Bayer executive to a former U.S. Food and Drug Administration deputy commissioner, and a 14-person investor advisory board.

Phillips said advisors are paid, and have set office hours with each company, to ensure startups get the most out of the program. Phillips said that concept was based on what he wished he had when he started his first company.

“I wished I had someone that understood everything about my industry; that said, ‘I’m part of your team,’” he said. “We’re not just doing master classes and getting coffee a few times per month. It’s a very programmatic approach.”

Companies will demonstrate their businesses at the end of the 16-week program on June 5. Applications for the Nex Cubed Digital Healthcare Accelerator’s fall cohort will open on April 1, with the next program kicking off in August.

Read more about this year’s participants:

Portland, Maine-based RockStep Solutions is working on organizing research for academia, biotech companies and contract research organizations. The company is working with UC San Diego, Columbia University, Novartis and several other partners to manage study design and results. It has raised $2.8 million in funding to date.

Portland, Oregon-based RISEcx is developing a platform for self-directed care management called CareSpace. The company is working with Kaiser Permanente, Facebook, Mayo Clinic and Microsoft to develop health coaches, assessments and other tools. The company has raised more than $1.1 million to date.

Los Angeles-based Ootify is a mental health marketplace that connects users with a mental health professional, life coach or mentor through an app. The company currently has more than 150 providers on its platform.

New York-based PreMinder is tapping into the marketplace for Medicare chronic care management. The company lets providers send out pre-recorded messages to patients through a phone call, with information on medications and surveys on their health. The company has enrolled more than 2,200 patients.

Kansas City, Missouri-based SaRA Health helps physical therapy patients with personalized exercises and reminders for adherence. The company is seeking to improve outcomes and reduce costs for occupational injuries. The company is preparing to launch a pilot with Kenworth Trucks.

Seattle-based Visom technology designed an application for the HoloLens to assist neurosurgeons using CT or MRI images, allowing them to get a three-dimensional view of the surgery. The company has applied for FDA pre-submission, and its technology will enter clinical trials at the Medical University of South Carolina.