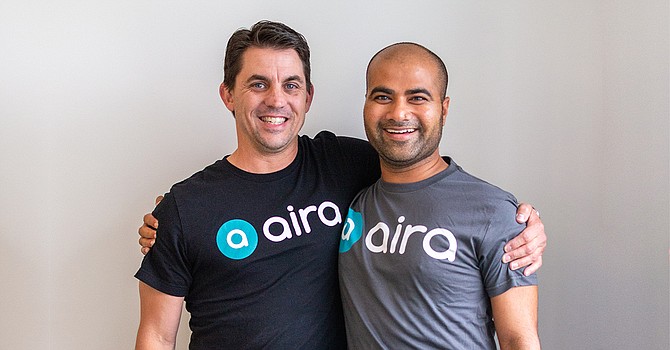 Mike Randall (left) joined Aira as its new CEO in June. Founder Suman Kanuganti (right) will serve as president of the company. Photo courtesy of Aira.

Mike Randall was named CEO of the company on June 3. His resume includes serving as vice president of business and marketing partnerships for Snapchat, global head of marketing and technology partnerships for Facebook, and senior director of music for Yahoo!. He also co-founded photo publishing platform FlipGloss Media, which was acquired by Forbes in 2009.

“I joined Aira to be part of a company where I believe the possibilities are limitless and our work showcases how technology can positively impact a person’s quality of life,” Randall said in a news release. “I’ve been following Aira’s success for some time and am inspired by the accomplishments of its dedicated team. My goal here is to build on that foundation, and make what Aira offers available to everyone.”

Suman Kanuganti, who co-founded Aira four years ago with late executive chairman Larry Bock and had been CEO, will now serve as president of the company.

In a June 13 blog post, Kanuganti wrote that he had decided to find a new CEO to lead the company this year, and was looking for someone who had previous success in building companies, and who was authentic and empathetic.

“Now is the time to double-down on rapidly scaling our company to get Aira in the hands of millions. It’s for this reason that I’m incredibly excited to bring in a new CEO,” he wrote. “Randall comes to us with a perfect combination of commercialization expertise, leadership, credibility, and passion for the product, our explorers, and our agents. He brings a wealth of experience scaling early-stage companies, such as at Yahoo before internet business was a thing, followed by working at Facebook before ads on social media became a thing.”

Aira equips its users with a pair of smart glasses, including a camera that can allow an agent to view and describe a user’s surroundings. They can also use their smartphone. The company has built up over 25,000 locations where its service is free to use, thanks to partnerships with AT&T, Walgreens, Bank of America, and other big brands. The company also partners with the National Federation of the Blind, the American Council of the Blind and the American Foundation for the Blind to make its products accessible to more people.

“I’m excited to work with Mike Randall to create an even more dynamic Aira,” Kanuganti said in a news release. “From the very beginning of our CEO search, he quickly became the top choice, and the board of directors and I feel exceptionally fortunate and excited for him to lead Aira moving forward.”