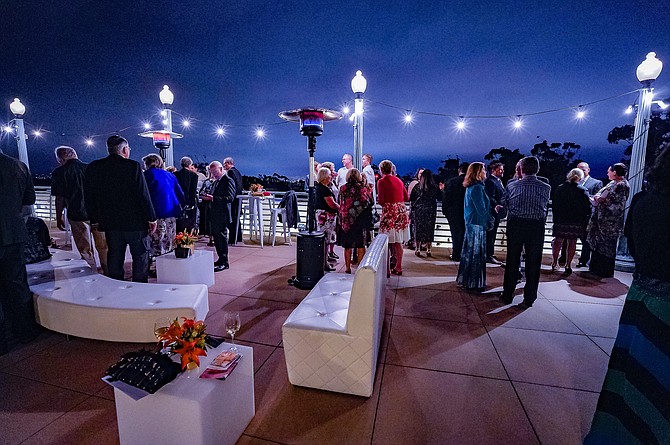 When the team behind 10 Barrel Brewing Co. began contemplating the design of their 10,000 square foot East Village space a little over two years ago, one of the first thoughts that crossed their minds was to incorporate an often untapped and underused aspect of the city’s buildings: the rooftop.

“A lot of breweries don’t have (a rooftop) and, for us, we wanted to embrace San Diego culture — the Southern California vibe and weather — and we really wanted to make it more than the standard brewpub,” said Zach Borba, general manager of 10 Barrel, with 56 employees. “We wanted to make it a venue where people could have a total experience.”

Unlike more dense, urban cities that have been making use of their rooftops for some time now mostly due to dwindling amounts of available space, San Diego, which isn’t as congested, hasn’t necessarily had a need to explore that option. But, in the era of experiential events and Instagrammable moments, it comes as little or no surprise that San Diego rooftops are becoming more and more popular. From movie cinemas to Shavasana’s Yoga classes to swanky hotel rooms, it appears, these days, there is no better selling point than top floor digs with killer views, and San Diego has taken notice.

According to 10 Barrel’s Borba, rooftops are becoming a thing in San Diego as of late because competition in the local hospitality sector is getting stiffer — in February, San Diego was voted one of the top 14 world destinations of 2019 by Forbes and, in March, it was named the fifth city for food lovers by Yelp, just to give an idea. Not to mention the city’s standard “75 and sunny” forecast, which makes it easy to make good use of an al fresco venue year-round.

“I think that the culinary scene, the brewery scene and the overall hospitality scene are extremely competitive these days,” he said, adding that 60% of 10 Barrel’s revenue comes from the rooftop. “There are a lot of good concepts that started incorporating their rooftops a while back and that helped them separate themselves. But now, you can’t just make good food and good beer and hope to stand out; the venue also needs to match the quality of what your kitchen is making.”

Borba said 10 Barrel, which sees anywhere between 300 and 700 patrons on any given weekend day, currently hosts live music on its rooftop every Friday from 6 to 9 p.m, as well as private events, and hopes to continue to add more revolving theme nights to its calendar.

10 Barrel isn’t the only local business that is making use of its sky view location. In May, the Copley-Price Family YMCA in City Heights opened its rooftop garden and earlier this month, downtown’s $80 million, 162-room The Guild Hotel, with a rooftop garden penthouse, opened its doors, just to list a few.

“One, you have this space at the top of the building that is usually wasted — that is usually where they put mechanical equipment and it usually isn’t very attractive up there,” he said. “But, at some point there was a movement to make it better, and that is when you started to see rooftop gardens. For example, the city of Chicago put a garden across the roof of its City Hall building (in the early 2000s). Then, some smart marketing guy said, ‘this is an opportunity for us, why not turn it into a restaurant or a bar or a space to hang out?’ That is what happened and it has been very successful.”

The other reason, according to Sannwald, while the rooftop tends to be the last area most builders think about, it is the most desirable. As it pertains specifically to San Diego, Sannwald said the construction boom of the last ten to fifteen years is what has sparked the rooftop craze.

“This is at the top of a building, probably the most expensive area because the higher up in a building you go, the more expensive the space tends to be,” he said. “From an economic point of view, it is like finding a whole other space.”

Judy Gradwohl, president and CEO of the San Diego Natural History Museum in Balboa Park, said, while the art institution has been a staple of the city for 145 years, it wasn’t until recently that the NAT began intentionally hosting and heavily promoting events on its 2,600 square foot rooftop.

“We have opened the rooftop occasionally over the years,” she said, “but the last two years, we’ve made more of an effort to make it even more available… it is one of the best kept secrets in Balboa Park — it has views east of the mountains, the Mexico skyline and also a great view of the park itself.”

The space, which holds between 100-200 people at a time, depending on the setup, now hosts its “NAT at Night” series from Memorial Day weekend through August 30, during which time the rooftop is open two nights a week (Thursdays and Fridays) till 10 p.m. Last year, when the series kicked off, Gradwohl said it was only open late on Fridays, adding that the rooftop event was bumped up to two nights this year after last year’s success. If this year goes well, she said the goal is to open even more late hours next summer.

Gradwohl also said, aside from “NAT at Night,” the rooftop is open for “December Nights” as well as its Holiday Food Truck Festival. On top of the above-mentioned occasions, the rooftop hosts about 40 private events a year that include corporate affairs and weddings, according to Gradwohl. She added that, to further maximize its rooftop, the NAT is working on long-term plans that would expand the space and make it more accessible.

Gerry Cottle, who brought his Rooftop Cinemas from London to San Diego in 2018, said it was a no-brainer for him to expand his outdoor film experience to America’s Finest City. Founded in 2011 in London, Rooftop Cinemas hosts one screening a night, seven nights a week, at the 25,000 square foot deck of the Manchester Grand Hyatt in downtown and sits around 200 people.

“I always wanted to do something that entertains people,” said Cottle, adding that he started with one rooftop in London and grew it to five locations in three years. “In 2015, we thought we wanted to do something great and take our unique brand of cinemas across the pond, so, we went to New York. Later that year we went to Hollywood and then, last year, we opened in San Diego.”

For $17, moviegoers get general admission, which gets them a seat, a blanket and headphones, said Cottle. For $24, guests get the same plus popcorn and the option to sit in a shareable loveseat for two. Rooftop Cinemas’ annual revenue is $5 million, according to Cottle, who said he plans to have 20 Rooftop Cinemas location open throughout the world in the next three years.

Joshua Liberman, general manager of restaurants and bars at Kimpton Solamar Hotel in the Gaslamp Quarter, said any new build-out or any existing asset taken over by Kimpton has a rooftop aspect to it these days.

“Before, rooftops weren’t on the radar like they are now. But, all new Kimpton projects have rooftops now,” he said, adding that Solamar’s Upper East, formerly known as Lounge Six, was actually one of the first rooftop venues in San Diego. “Five years ago, the Pendry San Diego (hotel) wasn’t there. And, next door to us, the Marriott, just added its rooftop a few years ago.”

To keep up with the competition, Liberman said the hotel decided to revamp its 7,500 square foot deck space recently, removing the dark wicker and over-the-top planters and replacing it with fun and bright-colored furniture in blue and green hues. Currently, Upper East, which generates 60% of all food and beverage revenue for the hotel, hosts a Wednesday night champagne happy hour; a once-a-month affair dubbed “Brews on the Roof;” a weekly Sunday party called “Escape Sundays;” and one-off partnerships like “Get Spritzed.” The latter is a collaboration with Aperol liquor company that will run during the month of August.

In addition to those events, Upper East, which has between 400-600 visitors per day on any given weekend, also hosts a monthly spin and yoga class and a quarterly Shavasana practice.

“The Pendry and Born and Raised (steakhouse) are all smart local operators with rooftops that are always doing cool things,” Liberman said when asked about his competitors. He also said he welcomes the newer entrants into the local rooftop scene.

“It just adds more value to downtown and brings more of the guests that we want,” he said. “It is exciting to see more people coming downtown as a result. In the end, it brings more traffic to all of us.”