With greater awareness of the mismatch of mental health needs and services, startups have sprouted to take on deficient access and lengthy waits for care. These upstarts see a big business opportunity, but scaling can be difficult in the fledgling market.

Not so much for Concert Health, though, which keeps inking contracts.

This eases the burden on busy doctors who can miss mental health symptoms. Patients can get care right away, too, instead of struggling to find a psychiatrist through a doctor referral.

“The longer you put between the referral and when they can start services, the less likely they are to go to that first appointment,” said founder and CEO Spencer Hutchins.

“I was getting convinced that most big problems in health care needed more than just better technology, sort of the rot in the U.S. health care system goes deeper than our apps not being good enough,” Hutchins said. 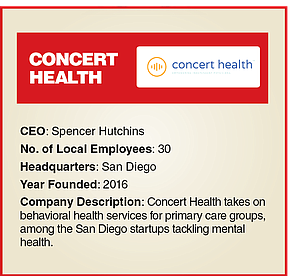 More important than technology was the right model. Concert Health formed in 2016 around bridging mental health and primary care.

With reimbursement, Hutchins said Concert expects to be profitable soon. In addition, the company brought in a $2 million seed round this spring, on top of more than $500,000 in earlier pre-seed funding.

But Concert must overcome low awareness of its model. Hutchins said it’s an easier sell in San Diego and wider Southern California, where there has long been an emphasis on tying reimbursement to patient outcomes.

With a national shortage of psychiatrists and other health professionals, it can be tough for companies in the space to scale. Key then is identifying high-risk populations and then educating them on care paths so they don’t drain company resources.

So far, the most prominent player appears to be New York-based Talkspace. In May, it raised $50 million in a Series D round.

The company’s mobile app connects users to licensed therapists, which has been endorsed by Olympic swimmer Michael Phelps.

Approximately one in five Americans encounter mental illness each year, according to the National Alliance on Mental Illness. Access to a mental health professionals can be a barrier.

Locally, an issue has been the psychiatric system. It’s strained to the point where patients often wait long periods for emergency, inpatient and continuing care, the San Diego Business Journal detailed in a three-part series in April. Hospitals roundly lose money in the area, forcing them to balance care and finances.

“Think of ERConnect like Google, with a streamlined interface to do only one thing,” said Tekeze CEO Andres Gutierrez in an email. “Google does search, so the metaphor provided shows you a magnifying glass icon and the ability to search for anything you enter.”

The San Diego company was spun out of Family Health Centers of San Diego, a federal health center.

Gutierrez said the application was initially developed for primary care, but also proved apt at connecting dots in mental health, particularly among the uninsured and under-insured.

Several San Diego hospitals and clinics use the platform. Tekeze is working on monetizing it.

In Carlsbad, MedCircle’s video-streaming service features mental health content from credentialed doctors. It’s built on the idea that access to mental health professionals is too difficult and costly.

Some videos are free, but it has a premium version with in-depth content that runs $19.95 a month.

MedCircle CEO Douglas Colbath is best known as the founder of Spyglass Inc., a startup that created the software engine behind Microsoft’s browser, Internet Explorer. He was unavailable for an interview.

In a news release Colbath said he sees curated mental health content as a solution to internet ills like cyberbullying, as well as a connected world that’s paradoxically made people feel disconnected.

Neal Bloom, the founder of Fresh Brewed Tech and who invested in Concert Health, said tech is making inroads in mental health.

“I like talent tech plays that are applied to niche industries, and this is a great one that also has good incentives for the supply and demand to make the marketplace efficient,” Bloom wrote in an email.