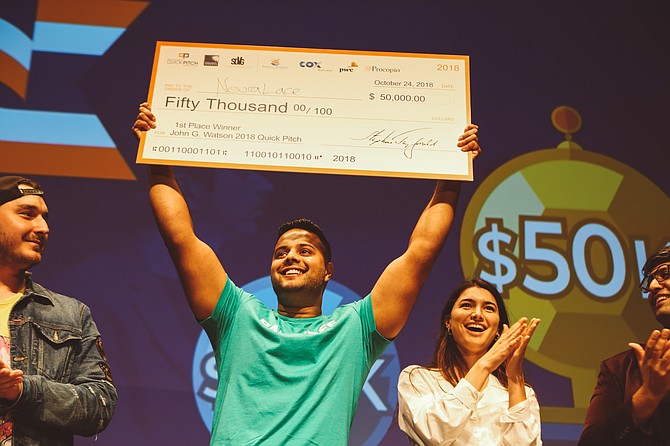 Update: NeuraLace recently added a new investor, Teal Ventures, bringing its total funding raised to $3.85 million. The round is expected to close in the next few weeks.

“After we went to Quick Pitch, that’s when we started getting some good traction,” Neuralace Founder and CEO Shiv Shukla said. “I’m grateful that we had a lot of interest and were able to find investors that were fully aligned. I never thought we would be in a place to have that kind of flexibility.”

Shukla founded NeuraLace in 2016, building on the research he had done on chronic pain while at UC San Diego. The company’s device, called Axon Therapy, is meant to treat chronic pain without using opioids. It uses a magnetic field to stimulate the damaged nerve that is causing the pain, “tricking” the brain and resulting in pain relief.

His company won the first-place prize of $50,000 at Quick Pitch in October. Since then, Shukla had sought to raise $2 million in funding to get the company through FDA approval.

With the new funding, Shukla hopes to add five contract software engineers and a full-time senior sales leader. He said roughly $1.1 million of the new funding would go to hardware and software development, and the remainder would go to NeuraLace’s FDA application, clinical studies and building out units for commercial launch.

The company is also gaining expertise with its new investors. Fred Middleton, a managing director with Mesa Verde, has more than 30 years of experience in biotech, including serving on the board of endovascular robotics company Stereotaxis.

Shukla celebrated another big milestone with the funding. After seven years of work, his company received its notice of allowance from the U.S. Patent and Trademark Office.

“It was seven years in the making. It was cool because it all came together in the last few months,” Shukla said.

The company is currently pursuing approval through the FDA’s 510 (k) clearance process, which allows device manufacturers to forgo clinical trials if they can prove their device is substantially equivalent to another device that is already on the market. Then, they must notify the FDA a minimum of 90 days before they begin marketing the new devices. Shukla anticipates approval could come through as soon as the second quarter of 2020.

“This is the part I’m very excited about — helping patients and finally getting it out there,” Shukla said. “I’m grateful that we have this level of support in San Diego. And that my current investors are reinvesting. As a brand new CEO, that’s huge for me.”