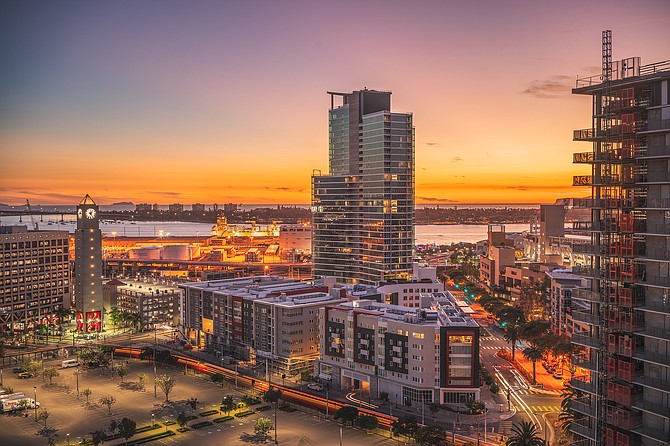 Park 12 - The Collection is one of several downtown apartment projects with appeal to millennials. Photo courtesy of Greystar.

San Diego developers who focus what they build on so-called millennials are right on target when it comes reaching the biggest market.

According to a recent study by the commercial real estate brokerage firm Cushman & Wakefield, people between the ages of 20 and 34 — millennials — account for 24.3 percent of San Diego’s population.

When it comes to those likely to be in the market to buy condominiums or rent apartments, that’s far more than any other age group in the market, although their younger siblings account for a slightly larger share of the overall population — 25 percent, according to Cushman & Wakefield.

That makes San Diego home to the third highest concentration of millennials in the country, according to Cushman & Wakefield.

Only Provo, Utah, and Austin, Texas, have higher concentrations of millennials at 26.8 percent and 24.5 percent respectively.

Taken together, millennials and those under the age of 19 are 49 percent of San Diego’s population.

That’s good news for developers of the newer downtown apartment projects such as Greystar’s Park 12-The Collection which just came on the market in April with 718 apartments overlooking Petco Park and The Richman Group’s K-tower with 222 apartments near the downtown library in East Village and LMC’s 368-unit Shift in East Village, with its distinctive red-and-black design.

Those projects have a host of amenities meant to appeal to younger renters such as fancy game rooms stocked with video games and indoor dog parks.

And while downtown is a hot market for millennials, it’s North Park just a bit removed from downtown that was listed by RentCafe, an apartment listing service, as one of the top 20 ZIP codes in the nation when it comes to having the highest concentration of younger residents at 33.1 percent of the population.

Among those drawing on that population is H.G. Fenton Co., which is finishing up The BLVD — a 165-apartment complex on El Cajon Boulevard, and Alliance Residential, which recently completed the 118-unit Broadstone North Park on Texas Street.

Not to be ignored, baby boomers, who account for a sizable chunk of the region’s population, are getting attention as likely buyers for some newer, pricey condominium projects in Bankers Hill, including developer

A. J. Tangsoc’s 41West which is marketing a penthouse for $4.7 million and Zephyr’s The Park.

According to RentCafe, three San Diego County neighborhoods, two in Chula Vista and one in El Cajon are among the ZIP codes with the largest baby boomer population in California.

“Apartment developers would typically look at population growth, job growth, new major employers who may draw people to a certain area, a shift in housing preferences of newer or older generations, as in a preference to live in a walkable neighborhood, or closer to entertainment, or to have access to luxury amenities without having to buy,” said Adrian Rosenberg of RentCafe. “So, in terms of development, targeting millennials or baby boomers depending on the area where they live is indeed the right thing to do.”