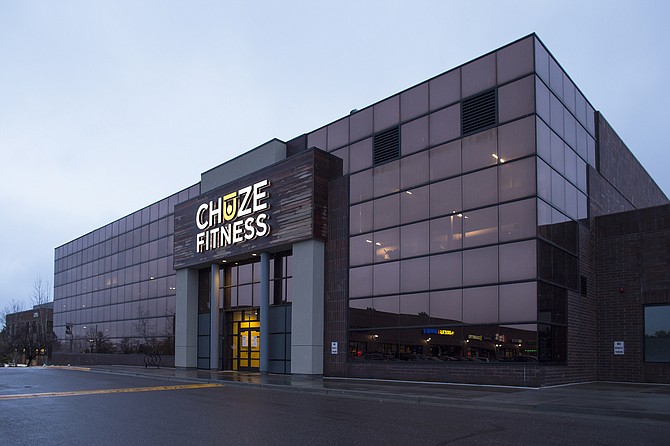 Chuze Fitness has seven locations locally and 26 throughout the southwest, and will add four more clubs by the end of the year for a total of 30, according to CEO Cory Brightwell. Photo courtesy of Chuze Fitness.

For Cory Brightwell, CEO of the San Diego-based Chuze Fitness chain, with seven locations locally and 26 throughout the Southwest, what has kept the company steadily growing the past 11 years has been one thing: its focus on the guest experience.

“I grew up watching my father and godfather, who were business partners since 1978, start up a restaurant company in Texas called Souper Salad, the first salad buffet-style chain, and grow that to about 50 locations in the southwestern part of the United States before selling it in 1995. Throughout my childhood, I saw them own and operate the restaurant business and hospitality was always a huge focus,” said Brightwell. “The guest experience was always front of mind and the main focus for how to be a successful entrepreneur in my family.”

In 2008, after his father, Charles Brightwell, and godfather, Ray Barshick, approached the younger Brightwell and his godbrother, Nick Barschick (Ray Barshick’s son) about starting a new family business, and after exploring a couple of restaurant concepts to no avail, they turned their efforts to fitness at the behest of a family friend.

Founded in 2008, Chuze Fitness employs 250 locally and 1,200 companywide. It’s revenue for 2018 was $59 million, and, in 2019, that number is forecast to grow to $75 million, according to Brightwell, who got a degree in business from Pepperdine University. 36-year-old Brightwell also adds that, by the end of this year, Chuze Fitness will have opened four more locations — one in Los Angeles County, two in the Denver area and one in New Mexico — for a total of 30 clubs. Out of the 30, 28 are family-owned, while two San Diego locations were franchised to a family friend in the earlier part of the company’s trajectory. 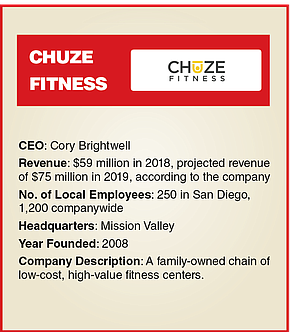 “A friend of the family told us to look at this company called Planet Fitness in the East Coast that focused on high-value, low cost health clubs where one can get a membership for only $10 a month,” said Brightwell. “We checked it out and liked what we saw. We liked the business model — it was easy to execute and operate, especially compared to restaurants.”

The next step was to understand the competitive landscape in San Diego, said Brightwell, adding that he and his partners took their time to look at other competitors, including 24 Hour Fitness and Gold’s Gym, in the market. What they quickly found out was that they wouldn’t have a hard time differentiating themselves if they placed high focus on hospitality.

“Twelve years ago, when you walked in a low-cost club, you may or may not be greeted, you’d be handed over to a sales person, equipment would be broken, air conditioning may be broken, bathrooms wouldn’t be cleaned,” said Brightwell. “They’d bring you to the front and put you in a cubicle and through a meat grinder — asking about your goals and making you feel bad about not accomplishing them. And then they’d offer you a membership. We felt we could bring a different approach to the industry.”

While hospitality has always been at the Chuze core, part of providing the best services to its clients means evolving and Chuze Fitness hasn’t been one to shy away from change. Brightwell said the Chuze business model has progressed quite a bit through the years in order to give members the best experience possible. The company started out with small, 15,000 to 20,000 square foot clubs with basic equipment, cardio, strength and free weights, said Brightwell. But, when the space began to get saturated with the likes of Planet Fitness and Crunch Fitness, which were building similar gyms and charging the same amount, Chuze decided to push its offerings further and provide even more amenities for low cost.

After its 12th location, Chuze Fitness decide to double the square footage of its future gyms to 40,000 and began adding amenities like pools, Jacuzzis, steam rooms, kids’ clubs, group exercise rooms and classes, cycling, cinemas and turf training and team training to all of its locations. And, although it added all of those perks, similar to those in higher-priced gyms, it kept its price point the same, said Brightwell. Instead, it added a tiered price system: $10/month, $22/month and $40/month. Each price point offers additional services, said Brightwell.

“When our members walk in, they are greeted by name and made to feel like family,” said Brightwell. “The facility is fully operating and clean and smells nice. So, you are paying a low price for a full package of amenities in a 40,000 square foot club. That is really what has occurred through 11 years of evolution.”

While boutique gyms have become popular as of late, Brightwell said it hasn’t affected the Chuze Fitness business much. A reason for this is because Chuze has stayed innovative and offers a lot of what the smaller guys offer. For example, Brightwell mentions Orangetheory Fitness, which has hour-long, full body workouts using heartrate monitors. Brightwell said Chuze Fitness took that concept and added it to their gyms under the $40/month program, which includes unlimited sessions and the entire health club. Unlimited classes at Orangetheory are much more than that.

He added that it was the exact popularity of smaller gyms that prompted him and his team to include the team training component to Chuze Fitness.

“We aren’t pulling in clientele that are focused on those boutique gyms,” he said, adding that “many folks who belong to those gyms also have $10/month memberships and use them simultaneously. Not only do folks that go to boutique gyms get the same experience or better at Chuze for a fraction of the price, but those that can’t afford the boutique experience can get the same services as well.”

Jamie Fullerton, co-owner of Hardcore Fitness located in downtown San Diego, said gyms like Chuze Fitness are important to the community because they cater to anyone that can appreciate good value.

“They are important to low-income members — without them some would not have the opportunity to be a part of a gym and it may be the only option they can afford,” she said. “Big chain gyms certainly have their place in the fitness world. The ultimate goal is for our society to be active and have the desire to live a healthy lifestyle. I love that we can coexist with the common goal of helping our society and our communities not only get healthy but stay healthy.”

She added that many of the Hardcore Fitness members, indeed, have dual memberships for flexibility.

Brightwell said, because of the value his gyms offer, Chuze Fitness’s traffic is driven mostly by word-of-mouth. He added that the company uses digital marketing, direct mail, TV and radio ads and “outdoor stuff like billboards on benches.”

Chuze Fitness, which is a play on the words “choose fitness,” got started with funding from both Brightwell’s father and godfather, plus loans from local banks. Three and a half years ago, a private equity firm out of San Francisco injected some capital for growth, said Brightwell, and, since then, Chuze Fitness has also partnered with some larger banks.

Brightwell said that 55% of the Chuze Fitness members are women, while 45% are men, and the median age is 35 years old. He said the company recently began to offer heated yoga studios as part of its latest prototype, which will also be included in the $40/month package.

And, whether big or small, Brightwell continues to welcome competitors.

“Where the industry was 11 years ago was not pretty, but, it has made leaps and bounds in improvements since then and that makes us all sharpen our pencils,” he said.