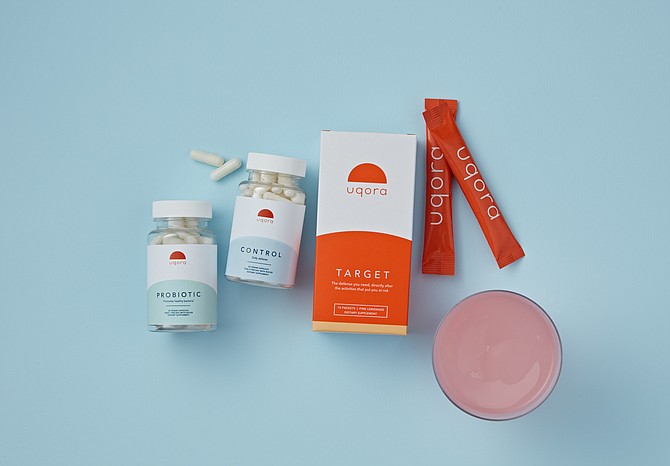 Jenna Ryan co-founded Uqora with her fiancé in 2017. She had hoped to find a better solution for a common problem, the frequent urinary tract infections that had disrupted her life.

“I had always gotten a ton of UTIs. I didn’t know the magnitude at the time, I just knew that I couldn’t live with it,” she said. “There was no good reason to explain why this was happening.”

Ryan wasn’t alone. Nearly half of all women will get a UTI at some point in their lifetime, and a smaller group of women have recurring UTIs.

After one bad year in 2014, Ryan knew something had to change. But all her doctors could recommend for prevention was cranberry, or taking antibiotics, which she didn’t want to use.

She and co-founder Spencer Gordon dug into the existing research, and decided to make a product using D-mannose, a type of sugar that is sometimes taken as a supplement to manage UTIs. Before she founded the company, Ryan worked in growth marketing for DocuSign, and Gordon had founded another local supplement company, Delta Nutrassentials.

Their first product was a drink powder intended to prevent UTIs. Ryan said the mix is designed to be consumed after activities that can increase the risk of an infection, such as sex, swimming or exercise.

Ryan’s idea garnered a lot of early interest. In 2017, her company made headlines when Uqora won the $40,000 grand prize from InnovateHer, the Small Business Administration’s pitch competition. Since then, Ryan closed a $1.4 million seed funding round in late 2018, launched three products, and grown her team to seven people. The company also moved into a new office in University Heights.

Ryan said winning the InnovateHer competition was an important inflection point for the company. It allowed Uqora to make it first hire and test its marketing strategy, starting with radio commercials.

“UTIs are so common and ubiquitous,” Ryan said. “It taught us, we really are in a game of reach.”

After surveying Uqora’s existing users, Ryan saw the need for another product. She found nearly half of customers didn’t know what was causing their UTIs. Uqora released its newest product, a supplement pill intended for daily consumption to prevent UTIs.

Though research is relatively sparse on UTIs, Uqora has been growing quickly. Ryan attributed it to the sheer magnitude of the problem, coupled with a cultural shift away from antibiotics with growing concerns over resistance.

“It’s a huge opportunity because it’s really been ignored,” she said. “It’s been completely under-researched. Personally, that bothered me.”

Uqora also plans to use part of its newly-raised funds to enroll for a clinical trial to test the efficacy of its products. Ryan said she hoped the data will open conversations with physicians, and provide more information in an area where research is still sparse.

Linda Brubaker, a urogynecologist with UC San Diego, said for most women, UTIs are a relatively rare event. But for a few groups of women, infections can be more frequent. Sometimes, younger women experience UTIs after engaging in activities that can put them at risk of an infection, but post-menopausal women can also be vulnerable to UTIs, due to decreases in estrogen levels. Estrogen can have a preventive effect against bacterial infections.

“It’s almost a different disease. The patterns are different and strategies around there are completely different,” she said. “Like many areas of women’s health, it’s under-researched.”

She said current treatment options include antibiotics, concentrated cranberry products, D-mannose and estrogen creams. While Brubaker couldn’t comment on Uqora’s product, she said D-mannose can be helpful to some people and has a low risk profile.