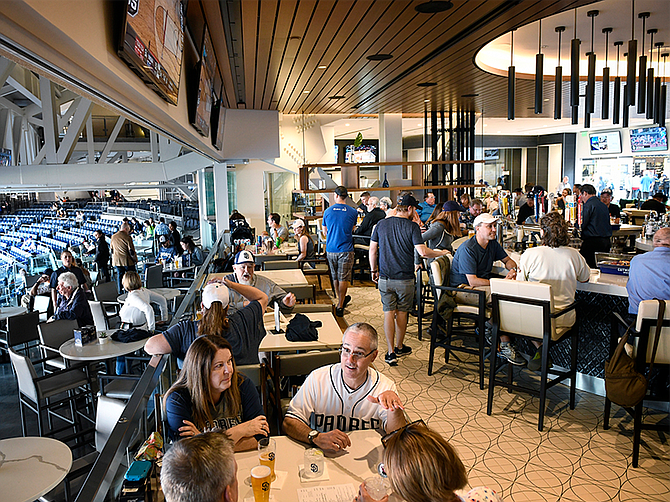 Petco Park is a mere adolescent as it enters its 16th year of operations, but like a teenager, it’s adjusting its look in a way to be more appealing.

The former Omni Premier Club on the third base side of the ballpark has a new name — the Compass Premier Club and VIP Patio Suite.

Along with the name change, the club has gotten a new look thanks to an extensive makeover by BNBuilders.

The company is headquartered in Seattle with offices in San Diego and Orange County, but it’s a familiar face to the Padres.

BNBuilders built the Padres Hall of Fame in 2016, which opened prior to the All Star Game that was played at Petco Park in July 2016.

The Padres won’t say how much they spent to transform the old Omni Premier Club, but the work was extensive.

Designed by Carrier Johnson + Culture, the 7,500 square-foot clubhouse was gutted and redone in a way meant to give patrons a better sense of being at the ballgame instead of in a closed-off room.

Where the Omni Premier Club had more of a sports bar feel to it, Compass Premier Club has a richer feel with wooden flooring and tiles covering what had been a plain concrete floor.

“It didn’t necessarily have to be updated but you could tell it could be improved upon.” said Evan Horn, project manager for BNBuilders.

Open it up, was the direction from the Padres, said Manuela Bravo-Smith, a senior associate with Carrier Johnson who worked on the project, said the message from the Padres was to give fans a better sense of being in a ballpark.

Dividing walls were removed and folding glass Nanawalls were installed to bring the ballgame into the club.

Unlike traditional walls, the Nanawalls fold aside to open onto the field, bringing the game to the fans.

“You really feel that you are in the stands looking at the game. You can hear the noise and the vibe of the fans when there is a game,” Bravo-Smith said.

For those who want a close-up of the action, a video wall of nine video screens was installed. The screens can show one large image or a series of smaller images so patrons can follow the play-by-play of the Padres game and catch other games at the same time.

The centerpiece of the renovation is a U-shaped bar with a glazed glass mosaic and custom-made decorative lighting that replaced a rectangular bar.

The shape of the new bar was part of opening up the room, giving a better view of the field.

“Over the bar, we have some decorative lighting that was custom made specifically for the space,” Bravo-Smith said.

Plush seating also was added to an expanded patio.

Before the renovation, the old club room was functional but a little cut-off from what was happening on the field.

“It was enclosed. It didn’t have that indoor-outdoor connection” Bravo-Smith said.