After working for San Diego-based software firm ArkusNexus for two years, Lonnie McRorey and Jesus Romero set out to start their own company. They founded Framework Science in 2017 in a tiny office in Tijuana. The company provides product and software engineering teams to help companies of all sizes. After nearly losing the business, they have since built it up to a 50-person operation with just under $2.5 million in revenue.

There’s really good talent and there’s a hunger here that I’ve never seen before, especially in Tijuana,” McRorey said. “People are driven and they want something new.”

It wasn’t an easy start — McRorey still gets emotional when he recalls two months in, the company’s largest client decided not to pay. The company faced having to lay off its 20 employees. Calling all of their contacts, Framework Science was able to drum up 14 clients in a span of six months, and won a settlement from the client that didn’t pay.

“There are a lot of engineers that believed in our vision,” he said. “We were able to go from near annihilation to almost $2.5 million in revenue.”

McRorey is one of a growing number of entrepreneurs looking to Tijuana to found, or grow, their companies. Some even choose to move across the border to take advantage of its lower cost of living and burgeoning food scene.

Tijuana has long been known for its maquiladoras, with Foxconn, Hyundai, Medtronic and Samsung manufacturing medical devices, car parts and television screens. But the region’s services sector is growing, with companies like Thermo Fisher and Honeywell turning to the region for its engineering talent.

“Tijuana has 30 years of manufacturing. Now it’s going to full R&D,” McRorey said. “They’ve invested in the infrastructure and colleges. That took Tijuana out of this party town, and now it’s becoming a serious mecca for manufacturing, and now for software development, healthcare and a lot of other things.”

Paola Avila, vice president of international business affairs for the San Diego Regional Chamber of Commerce, said Tijuana’s close proximity and lower development costs make it an attractive option for startups. A shared time zone, and often, a shared language, makes it easier for cross-border teams to communicate with each other.

“Because of the proximity, members of the same startup can meet with developers or other team members in the same day if needed,” she wrote in an email. “All of the factors, as well as the access to a skilled workforce and access to a large consumer market across the border, make it very attractive for startups.”

Of course, there are also plenty of obstacles to running a binational business. There’s the obvious: the nine border crossings that thousands of U.S. and Mexican residents travel through every day.

Gustavo de la Fuente, executive director of the Smart Border Coalition, said roughly 40,000 to 50,000 U.S. residents live on the Mexican side of the border.

“It’s so painful to cross that border sometimes,” he said. “But for the people who live here, it’s a day-to-day occurrence. It’s the status quo.”

“A lot of companies shy away from the border because they think, I have to go through the governments … How do I get anything done there?” He said. “You have to work with some of the agencies but you don’t have to work with everybody all the time.”

“Making a company in Mexico is three times more complicated than in the U.S. Get yourself a good lawyer,” he said. “You need to be engaged in what type of company you’re building. … Is your company an extension of a company in the U.S. or a separate company?”

Velazquez also recommended that companies think ahead to what their business is going to look like in the next five to 10 years. He said startups should consider the training they’ve invested in existing workers, and the competition for software talent in Tijuana.

“Don’t only plan to save money, but plan ahead,” he said. 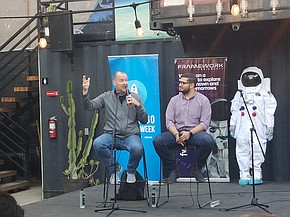 CEO of Growth HaxCo-founder and COO of Framework Science

Other companies might find a bigger market for their business south of the border. Two years ago, David Peguero joined Growth Hax, a company that was started by CEO Rob Ryan in Los Angeles to build a network of mentors for startups. The two connected through Twitter while Peguero was working at a business incubator in Tijuana.

“Coming to Tijuana opened his eyes to a whole new market he was not expecting,” he said. “Now, most of our clients are in Mexico, Argentina, Columbia and Peru.”

Growth Hax puts on workshops for startups and helps universities develop networks of mentors to support their programs for entrepreneurs. Sometimes, the team travels to Guadalajara. Other times, they connect with companies in Argentina and Colombia through video calls.

As its partner of client delivery, Peguero works with startups to help them determine if they’re ready to raise funding, where their market is, and what programs or investors are the best fit to help them reach their goals.

“For me, it was amazing how these amazing startups from Argentina were listening to me, this kid from Tijuana. They didn’t care (where I was from), they just needed the knowledge, they needed someone to listen to them, they needed the guidance,” Peguero said. “If we create binational companies, it’s going to replicate.”