Mexican fast-casual chain Qdoba Mexican Eats has decided to keep its headquarters in San Diego. According to press release, its new offices are located in the Amp&rsand office complex, the former San Diego Union Tribune building, and will be dubbed the “Qdoba Flavor Central.” The headquarters will also serve as a hub for the culinary team to create and test menu innovations. 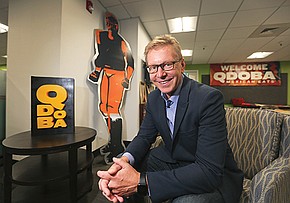 “The Qdoba team is excited to call America’s Finest City our official home,” said Keith Guilbault, CEO of Qdoba Mexican Eats, via a statement. “During the search for our new office, we knew we wanted to stay in San Diego and diligently sought out a space that reflects our collaboration-centric culture. The Amp&rsand is a perfect fit.”

Guilbault said that since Qdoba’s acquisition by Apollo Global Management, LLC, the team has grown from 40 to 125 locally. Qdoba was sold by Jack in the Box Inc. to Apollo for $305 million in cash in 2017. The reason for it, as per Jack, is since operating two different business models was hurting the company’s valuation.

Qdoba has more than 750 restaurants in the United States and Canada.