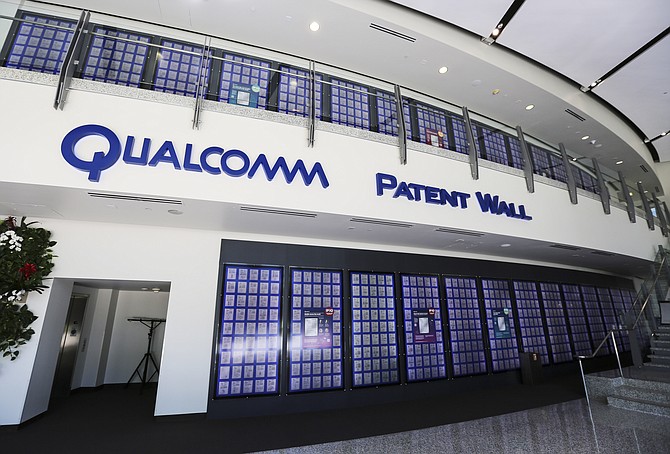 Qualcomm has spent $4.29 million in lobbying so far this year, according to the Center for Responsive Politics. The company faces several major regulatory hurdles, including whether the U.S. will loosen the ban on exports to Huawei, and whether an appeals court will agree with a lower court ruling that Qualcomm’s licensing practices violated antitrust law. File photo by Jamie Scott Lytle.

Qualcomm Inc. isn’t in the clear, yet. As it once again faces several key regulatory decisions this year, the fabless semiconductor company spent $4.29 million in lobbying in the first half of 2019, according to the Center for Responsive Politics’ lobbying database.

That puts Qualcomm on pace with last year, when it spent a total of $8.01 million in lobbying. At the time, Qualcomm faced a hostile takeover from Broadcom Ltd., which President Donald Trump blocked over national security concerns stemming from its purported ties to China. Broadcom has since shifted its headquarters from Singapore to San Jose.

At the beginning of the year, Qualcomm spent more than electronics companies IBM Corp., and Apple Inc., according to OpenSecrets, of the Center for Responsive Politics. It was outspent by Microsoft, which spent $2.79 million in lobbying. Qualcomm spent most of its lobbying dollars between Covington and Burling, a large lobbying firm in Washington, D.C., and its in-house lobbying team.

While it’s difficult to measure lobbying outcomes, Daniel Auble, a senior researcher for the Center for Responsive Politics, said companies clearly see some value in it.

“It’s highly important to have established connections in Washington so that when an issue comes up, they’re able to react quickly and they know the landscape,” he said.

Most public disclosures refer to instances where companies will send lobbyists to meet with government officials, whether in-person or over-the-phone. The entire process is more subtle than one might expect, Auble said. Rather than pushing to introduce or kill a bill, for example, companies might look to insert or remove a sentence during committee hearings.

Generally, companies spend more on lobbying in the year after an election, and less in the year before an election, Auble said. But at the end of the day, it depends on what’s going on with their business.

“It’s typical to see a company or a trade group have a spike (in spending) in a year when something about their business becomes a public issue, or some kind of regulation or new legislation that would affect their bottom line is proposed,” he said.

Qualcomm faces two major regulatory decisions this year: whether it will be able to continue to do business with Huawei, one of its major customers in China, and whether the company will have to redraft its licensing agreements after losing an antitrust case brought by the Federal Trade Commission.

In May, President Donald Trump blacklisted Chinese telecommunications company Huawei from doing business with U.S. firms. Chipmakers have been quietly fighting the ban, with lobbying group the Semiconductor Industry Association saying it would erode the competitiveness of the U.S. semiconductor industry.

According to SIA, the U.S. semiconductor industry had a $2.5 billion trade surplus with China last year. Huawei is a significant customer for Qualcomm, Intel and other chipmakers. Both companies reportedly have had conversations with the U.S. Department of Commerce since the ban was instated, according to Reuters, and the White House hosted a meeting on July 22 with seven tech companies to talk about potentially resuming sales to Huawei.

In the meantime, Huawei has hired two public relations firms, Racepoint Global and Burson Cohn and Wolfe, to lobby on its behalf, according to the Center for Responsive Politics. The company also slashed more than 600 jobs at its Silicon Valley research campus, Futurewei Technologies.

Trump has spoken recently about loosening the restrictions to allow companies to begin selling products to Huawei. But so far, there haven’t been any substantive changes. Huawei is still on the Bureau of Industry and Security’s “entity list,” meaning U.S. companies must apply for a license to export approved products to Huawei.

Stacy Rasgon, a managing director and senior analyst for Bernstein, said the ban is “not fun, but manageable,” for Qualcomm. The San Diego-based chipmaker sells 60 million chips per year to Huawei, he said, but they’re lower-end. Other companies may see a larger impact. Qualcomm did not respond to requests for comment on the ban’s effect on its business.

Rasgon said he’s more concerned about the potential escalation of trade conflict than the direct impact.

“My worry is, with Huawei, what’s next?” he added.

In the near-term, the Huawei ban may be a nuisance for Qualcomm, but it has more imminent concerns with appealing an antitrust case that could change its licensing business.

Qualcomm’s stock soared in April, after it settled two years’ worth of legal battles with Apple Inc., bringing back one of its biggest customers. The companies also signed a six-year licensing and supply agreement. But Qualcomm’s licensing business was thrown back into question a month later, after District Judge Lucy Koh ruled the company stifled competition for baseband processors, the chips that allow phones to connect to a network.

It’s too early to predict how the appeals court will rule on the case. The panel of three judges that will hear the case won’t be selected until toward the end of the year, Rasgon said. Of the 28 active circuit judges that could be picked for the panel, 16 were appointed by Democrats and 12 were appointed by Republicans, including seven under the Trump administration.

“It’s about to be a waiting game for a while,” Rasgon said.

In the meantime, it will be important for Qualcomm to get a stay, delaying the sweeping implications of Koh’s ruling. Without one, the verdict could give its customers ammunition to renegotiate their contracts.

Some have already begun to challenge their licenses, according to statements filed in conjunction with Qualcomm’s motion for a stay. Huawei and one of Apple’s contract manufacturers have challenged their licenses, John Han, the general manager of Qualcomm’s licensing business, wrote in a July 8 court documents supporting the company’s request for a stay.

In addition, four of Qualcomm’s top 10 licensees by revenue will see their contracts expire by the end of the year, meaning Qualcomm will have to renegotiate those agreements anyway. Last year, Qualcomm’s licensing business brought in $5.16 billion, accounting for roughly 23 percent of the company’s total revenue.

Rasgon said he found the disclosures “somewhat disquieting,” adding the extent of the renegotiations would depend on Qualcomm’s customers.

Though the FTC maintains its case against Qualcomm, other regulatory agencies have gone to bat for the chipmaker. On July 17, the U.S. Department of Justice filed an amicus brief advising the appeals court to grant Qualcomm a stay, for national security reasons.

“Immediate implementation of the remedy could put our nation’s security at risk, potentially undermining U.S. leadership in 5G technology and standard-setting, which is vital to military readiness and other critical national interests,” the DOJ wrote in the filing.

Qualcomm also obtained a statement from the Committee on Foreign Investment in the United States (CFIUS), stating that a reduction in Qualcomm’s R&D spending or influence on the standards process could be detrimental to national security.

But at the end of the day, the final decision is up to the appeals court.

“It’ll be up to the judges,” Rasgon said. “They’re independent. They can do whatever they want.”