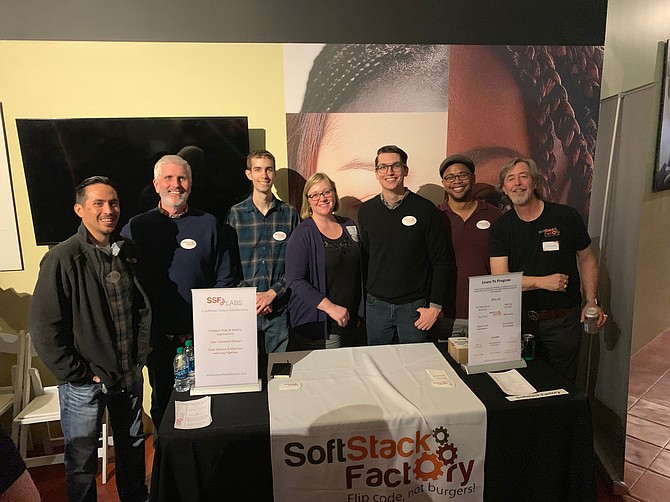 Coding bootcamps can be an intriguing option for young professionals looking to make a career change, but they come with a significant cost. In San Diego, dozens of coding schools offer full-stack programs, which teach people the basics of front-end and back-end web development, including HTML, CSS and Javascript. But almost all of them cost upwards of $10,000.

Harold Gottschalk, CEO and co-founder of SoftStack Factory, wanted to change that. He incorporated SoftStack as a 501c3 nonprofit in 2015, and began offering a 24-week full-stack program for less than $1,000.

“It’s about exposing people to the digital opportunities we have today,” Gottschalk said. “We give them the opportunity to understand what it is and say this is for me, or not for me, without a lot of risk.”

Gottschalk previously served as co-founder and chief technology officer for CSIdentity, an identity theft detection software business. The company sold to Experian for $360 million in 2016. Later, while talking to a friend about his idea for a coding school, his friend challenged him to form SoftStack.

“I knew there were all of these good jobs in America,” he said. “People don’t realize there are these opportunities because they’re not trained to do these things.”

After testing out a few models, Gottschalk began offering the program on a part-time basis, making it more accessible to working students. He has also added a three-month data science and machine learning course.

Gottschalk doesn’t promote an instant, high-paying salary for graduates, but he hopes it will give them the connections and experience to get their foot in the door. SoftStack works with local nonprofits and startups to find interesting projects for its students to tackle. In one case, they built a web application portal for Reboot, a local nonprofit that helps transitioning military service members find jobs.

To date, Gottschalk said the SoftStack has seen 80 graduates. They’ve landed jobs at Qualcomm, ServiceNow, Lytx, MindTouch, and Soci, to give a few examples.

Filling in the Resume

“I had a background in sales. I didn’t have a technical background,” Cole said. “I was looking for a way to build that.”

He was able to apply what he learned to his current job by helping provide analysis for the data that was coming in through his work.