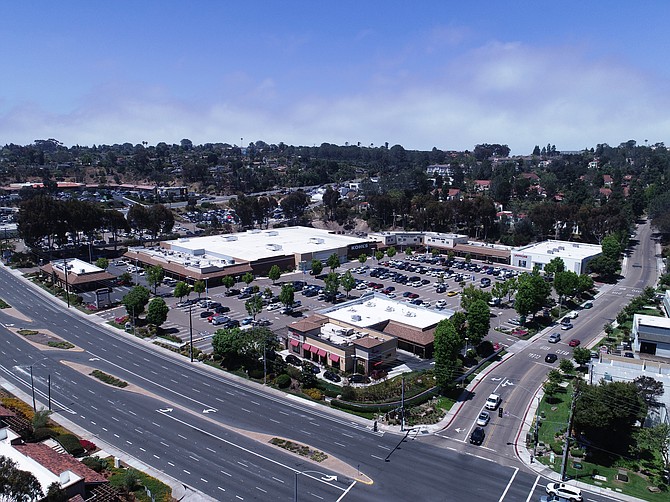 The Encinitas Marketplace was sold for $43 million. Photo courtesy of Colliers International.

Retail property finished the first half of 2019 with a mixed performance as investors went after top centers with multiple offers but shied away a bit from space in some neighborhood strip shopping centers.

“The economy is good, interest rates are low, compared to last year they’re lower. That’s a plus. Capital is abundant,” Barnett said. “You certainly have more capital, more buyers than there is product.”

Even so, the commercial real estate brokerage CBRE reported that “a slower than average” second quarter of 2019 left the market “relatively unchanged.”

Among the prominent deals in the first half of the year was the $43 million sale of the 124,411 square-foot Encinitas Marketplace at 110-194 El Camino Real in January.

Encinitas along with Chula Vista and Carlsbad had the most retail space that was newly occupied in the first half of the year, according to a report by Jolanta Campion, director of research for Cushman & Wakefield in San Diego.

Campion said that there was a slight increase in vacancy rates for the first half of 2019 compared with the same period in 2018 — 4.8 percent compared with 4 percent, according to Campion.

Chad Iafrate, a senior director with Cushman & Wakefield, said the uptick in vacancy rates is temporary.

“I don’t think it’s indicative of a changing in trends just yet,” said Iafrate. He said prospective tenants are negotiating for some of that vacant space, so vacancy rates will likely drop by the end of the year.

“There’s a huge demand for quality space,” Iafrate said. “We have multiple offers and rental rates are north of $7 a square foot for base rate per month. That’s a pretty healthy rate.”

In contrast, Iafrate said demand has slackened for in-line space with a lower profile in the middle of strip of stores.

“We’ve kind of reached the peak in rental rates for that kind of space,” Iafrate said. “There’s still activity, but I think a lot of the prospective tenants are either being more selective or when you get into these centers that have a large number of shops in the center, a lot of these categories are already existing in the center. You have the nail salon, you have the pizza guy, so it’s hard to find new tenants that don’t compete with existing tenants.”

Barnett of Colliers said the most desirable centers are anchored by grocery stores and pharmacies as opposed to centers that focus on specialty shops.

Still, both Barnett and Iafrate said they expect retail in general to remain solid through the remainder of 2019 and into 2020.

“We’re still in a very healthy environment and there’s still plenty of leasing activity going on and I expect that to continue with (interest) rates staying low,” Iafrate said.