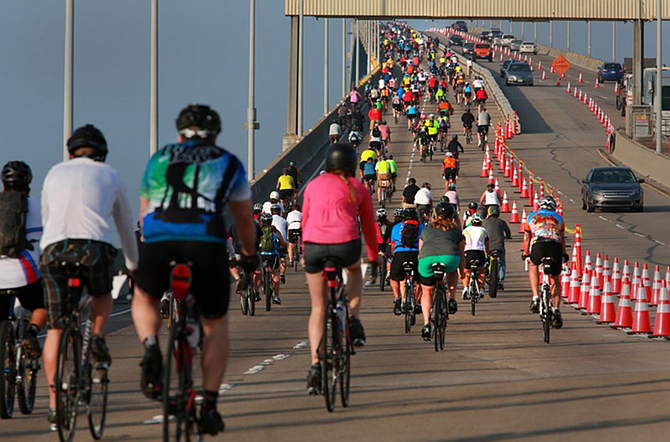 San Diego’s annual Bike the Bay fundraiser is a fun, casual and rare opportunity to go across the San Diego-Coronado Bridge and travel through five cities via the Bay Shore bike lane. It also brings a couple of hundred bikers into the city that might not have a reason to come otherwise, according to Andy Hanshaw, executive director of the San Diego County Bicycle Coalition.

“We are fairly consistent in tracking between 3,000 and 4,000 participants each year,” said Hanshaw. “People come from all over to do it. Some come from out-of-state because it’s a beautiful time in San Diego to come ride, it’s in August and people are still on vacation.”

According to Hanshaw, roughly 50% of the riders are from San Diego and close to 10% of the participants come from Arizona. While they have no way to track the number of hotel room night bookings Bike the Bay generates or the actual economic impact it has on the city, Hanshaw said the impact is “significant” and that the organization works with several of the hotels in the downtown area to accommodate the Bike the Bay guests year-over-year.

Bike the Bay is a 25-mile ride that has an optional eight-mile loop through the Otay Valley Regional Park. This year will mark the 12th ride and 3,000 participants are expected to attend, according to Hanshaw. Prices start at $60 per person and include a festival held at the Embarcadero Marina Park South, where the ride starts and finishes.

To promote the event, Hanshaw said the coalition does a lot of social media outreach. It also works closely with local bike shops and with the San Diego Tourism Authority. He adds that the Bike Coalition generates $70,000 in funding on an annual basis, which is used toward creating better biking efforts and advocating for protected bikeways in San Diego. Hanshaw said the city is currently completing phase 1 of the official track network for the Downtown Mobility Plan, passed in 2017, which gives bikers “good, safe connections and options to move around other than driving” in the city.

“Downtown is going to triple in population in the next 15 years and employment is going to double,” said Hanshaw. “(It would be) smart to have good bike and pedestrian networks for the downtown community… As they go in, I guarantee, and already see, more people using bikes and scooters and things other than driving.”