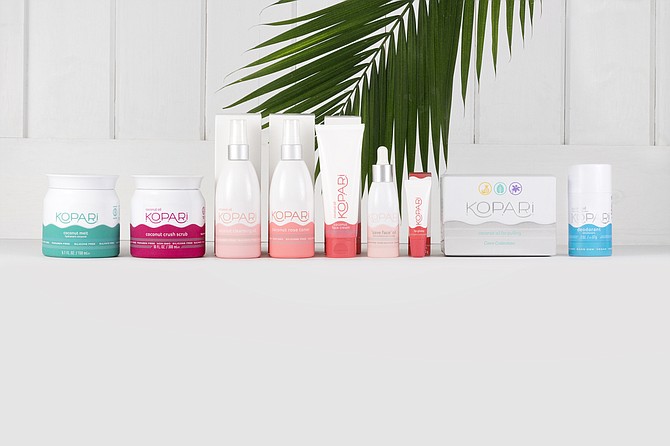 Kopari, however, was born of much more humble beginnings.

Bryce Goldman was inspired by his wife’s use of coconut oil in the kitchen. This led him to learn more of the many beneficial uses ascribed to the fruit. With an eye for beauty products from having worked in the industry for more than 20 years, Goldman knew he had found a special ingredient.

In 2015, with the help of fellow co-founders, Gigi Goldman (his wife), James Brennan and Kiana Cabell, Goldman launched Kopari Beauty, a coconut powered lifestyle brand. Headquartered in La Jolla and with 33 employees, the company was self-funded and also received initial investments from family and friends, said Bryce Goldman, Kopari’s CEO. 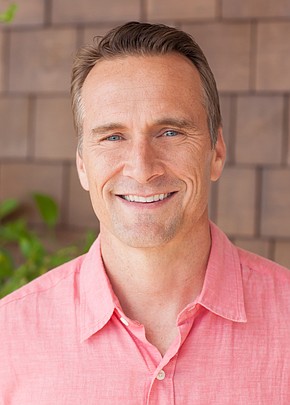 In 2018, Kopari Beauty’s revenue was between $10 million and $20 million, according to Goldman, adding that the company has had triple-digit-growth year-over-year. In almost four years since launching, Kopari Beauty is targeting 50% year-over-year growth in 2019, he said.

“I noticed my wife and fellow co-founder, Gigi, using coconut oil in the kitchen and we started to read and hear about the skin and hair benefits of the ingredient, so we started experimenting with it,” said Goldman, who was working in his family’s business, Empire Beauty, before launching Kopari Beauty. “This was our lightbulb moment and we quickly realized that coconut oil was going to be our hero. We also believed wholeheartedly in natural products, so, our mission from the beginning was to create clean and effective products at an approachable price with coconut as the core ingredient.”

Goldman and his team launched Kopari Beauty online October of 2015 and were happy in the direct-to-consumer sector. But six to eight months later, Goldman said they started to receive phone calls from national retailers. After some debate, they ultimately decided to “diversify and take more of an omni-channel approach,” he said, in order to give Kopari’s growing consumer base both online and offline access.

Kopari Beauty launched in Sephora in 2017 and has since expanded to Ulta Beauty, Nordstrom, Urban Outfitters, Riley Rose, Bloomingdale’s and Anthropologie, among others. This year, Kopari Beauty began selling on Amazon and Revolve.

Today, Kopari Beauty products are sold in nearly 2,000 stores throughout the United States, Canada and Australia, according to Goldman.

“Coconut oil has so many incredible benefits for your skin, hair and body,” said Goldman. “It is inherently antibacterial and antifungal, contains a ton of vitamin E and proteins that effectively moisturize your skin and hair and boasts fatty acids that help to smooth skin and shrink the appearance of pores… Our hero ingredient is also a strong emollient, due to its high concentration of medium-chain fatty acids that establish a protective barrier on the skin’s surface, which when applied topically, traps in moisture to keep skin ultra-hydrated.”

Coconut oil is also rich in lauric acid, said Goldman, which is proven to have antibacterial, antifungal and anti-inflammatory benefits. “Studies show that this not only makes coconut oil an amazing moisturizer, but also helps to reduce bacteria in the skin which can help prevent breakouts,” he said.

Erlinde Cornelis, assistant professor of marketing at the Fowler College of Business at San Diego State University, said the popularity of coconut oil both culinarily and cosmetically can be attributed to its actual benefits, but also because of the hype surrounding it.

“Coconut oil is often hyped up as a miracle product, similar to claims of goji berries being ‘superfoods’,” she said. “Without neglecting the actual benefits of coconut oil, it is important to know that any natural product that gets a certain ‘star status’ is often overhyped. Coconut oil may have benefits on your skin, especially when compared to skin care products containing harmful ingredients, because your skin may be exposed to less toxins; and that in itself is a ‘health effect’.”

Cornelis said the “hype” surrounding a product or ingredient, in this case coconut oil, tends to be magnified by social media and social media influencers and their followers that may feel hopeful and curious about their beauty routines and brands of choice, creating a “herding effect.”

Despite the popularity of certain ingredients potentially being a fad, Cornelis said what has remained a permanent trend is consumers’ desires for more natural options.

“Consumers demand more transparency from companies, they are more educated about the health benefits and more critical, more demanding and more health conscious than ever before,” she said, adding that this trend in consumer awareness is likely to grow. “So, companies that make the switch to more natural ingredients are definitely meeting that consumer demand. Companies who don’t follow those consumer trends might be putting themselves in a tough spot in the long run.”

Goldman said the coconuts the company uses are sourced from family-run farms in the Philippines and sustainably formulated and manufactured in Southern California. Distribution and shipping are handled through Kopari’s distribution center in the Midwest. He said the Kopari Beauty formula was created by co-founder Kiana Cabell, who heads up product development for the brand.

“She grew up in Hawaii and used the native ingredient, coconut, in her own homemade beauty treatments,” Goldman said. “It wasn’t until she became a Certified Organic Chef at New York’s Natural Gourmet Institute where she learned all of the ways that coconut benefitted the body, both inside and out, that she became fixated on the topical uses of the superfood.”

Not only does Kopari Beauty create products with naturally-derived coconut-based properties, the company also utilizes complementary natural ingredients to “elevate the natural benefits of coconut to create luxurious products with incredible textures and fragrance,” said Goldman, “which provide an enhanced consumer experience across multiple product categories.” This has helped with the company’s success, said Goldman, who counts Herbivore Botanicals, Youth to the People, Tula Skincare, Tatcha and Mario Badescu as its competitors.

With the $20 million funding round, Kopari Beauty will continue to innovate on the product development side and grow its national and international presence. In August, the beauty company will launch its multi-use coconut melt wipes for the face and body, Goldman said.