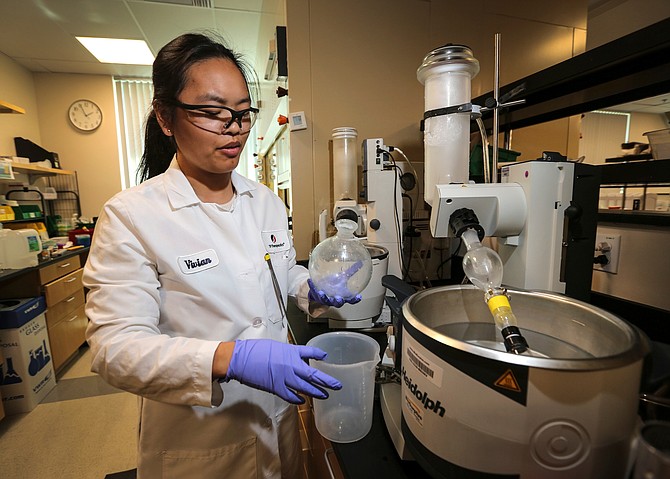 A class of drugs called tyrosine kinase inhibitors proved to be a breakthrough in cancer. But there’s a hitch: Tumors can develop resistance to the drugs.

Investors are game. Turning Point in April raised $175.2 million in an initial public offering, exceeding even the company’s expectations.

“We were, I thought, a relatively quiet company, but as we got out there and investors started to hear the story, we no longer were a quiet company,” said CEO Athena Countouriotis of the run-up to the public offering.

After the IPO momentum kept building. Turning Point’s stock was at nearly $40 a share in late July, more than double the IPO price.

Founded in 2013, the company occupies a fast-changing corner of the cancer market that includes behemoths like Eli Lilly and Roche. It’s no wonder, then, observers and analysts believe Turning Point could be an acquisition target in the vein of Ignyta, a San Diego cancer drugmaker that Roche bought for $1.7 billion in 2017.

Every biotech has its sale price, but Countouriotis insisted this isn’t a build-to-buy operation.

“We get asked a lot about partnering,” she said. “This is a company absolutely that we’re building for sustainability.”

Turning Point has 80 employees, quadruple that of a year ago. Focus is on the company’s lead drug candidate, repotrectinib, which recently moved into a phase 2 clinical trial.

Typically biotechs will ask the U.S. Food and Drug Administration for the OK to market a drug after a phase 3 clinical trial, though sometimes the agency accelerates approvals.

Drugs that fall under the banner of kinase inhibitors exist for these cancers, but enzyme mutations can render them ineffective. Such is this case with xalkori — a successful Pfizer drug whose lead inventor went on to start Turning Point in 2013.

“I saw problems with xalkori and other drugs available for this type of cancer, and I knew that someone needed to work on these problems so that we could provide better medicines for patients,” Cui said in a 2015 interview with the San Diego Business Journal. “That’s why I resigned from Big Pharma — to start a company that could solve these problems.” She founded Turning Point with her husband Y. Peter Li, who resigned from the company and board following the IPO.

How can Turning Point outdo other cancer drugmakers? The company highlights its kinase inhibitors’ compact structure and design — which bind deep into the pocket of the kinase receptor where other drugs can’t reach.

“Having a smaller structure enables our molecules to potentially overcome treatment resistance and still have efficacy,” Countouriotis said.

Results so far have been encouraging. In late May, Turning Point presented data showing repotrectinib in a phase 1/2 trial significantly shrank the tumors in nine of 11 lung cancer patients who had previously not been treated with another drug.

The two other patients clinically benefitted to a lesser degree, per the results.

Berens added the May results show repotrectinib’s better-than-anticipated results as a frontline treatment.

“We believe one of the key fundamental debates is whether (repotrectinib) will be used in the frontline, or saved for those patients who develop resistance mutations,” Berens and team said in a June research note.

Efficacy is one thing, but a strong safety profile separates a cancer drug from rival products. Many cancer drugs wreak havoc on the immune system.

Turning Point said repotrectinib was well-tolerated, with some patients reporting dizziness, constipation and other side effects.

Berens noted some investor concern over the drug candidate’s safety. But Analyst Arlinda Lee with Canaccord Genuity said based on the data so far the drug appears “generally safe.”

Both analysts also said Turning Point’s story goes beyond repotrectinib. Another of its programs recently entered clinical trials, with a different one poised to follow suit.

Like repotrectinib, Turning Point holds exclusive rights to the programs, a compelling point among investors.

As of March, before the IPO, Turning Point reported $90 million in cash after an $80 million round last year.

In connection with the financing Countouriotis was promoted from chief medical officer to CEO, making her part of the new face of San Diego biotech leadership.

It’s a contrast from 2016, when of 44 public life sciences companies in San Diego, Helen Torley of Halozyme was the only female CEO.

She credited other women with playing a pivotal part in Turning Point. Sheila Gujrathi is the company’s board chair, as well as the CEO of Gossamer Bio.

And a female banking team at Goldman Sachs managed the IPO.

Countouriotis said she pushed the banks underwriting the deal to go faster. The goal was to avoid being stuck in a queue that formed after the government shutdown froze IPO activity for nearly two months.

Asked about other challenges, Countouriotis said she was tasked with raising the company’s profile ahead of the public offering. With Turning Point shares popping since then, safe to say that the company is on the radar of more investors.