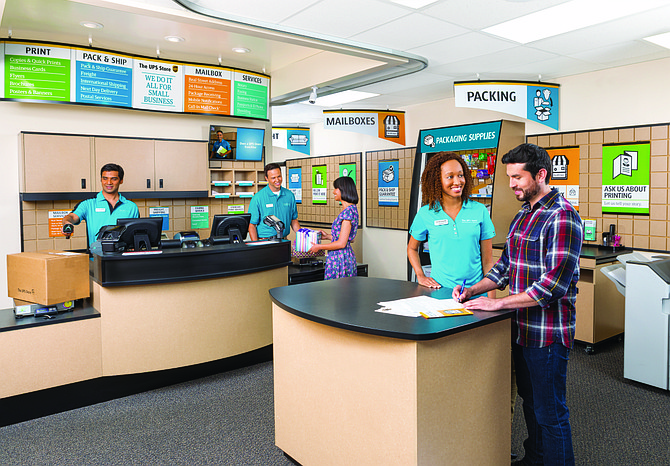 What began in 1980 as a convenient alternative to the post office, where people could ship packages and make copies, has grown into a multibillion-dollar network of more than 5,000 stores that offer a range of products and services including packing, shipping, printing, office supplies and passport photos.

Global shipping giant United Parcel Service Inc. purchased San Diego-based Mail Boxes Etc. in 2001, and rebranded some 3,000 stores in 2003 as The UPS Store, a wholly owned subsidiary of UPS. The chain now includes some 4,800 stores in all 50 states, including 70 in San Diego County, and about 350 stores in Canada. The UPS Store’s corporate headquarters is in San Diego’s Sorrento Mesa neighborhood.

Under The UPS Store’s business model, all of its locations are franchises, meaning they are owned by independent entrepreneurs, rather than by the company. That sets the company apart from its competitors, such as the U.S. Postal Service, FedEx and big box stores, said Tim Davis, president of The UPS Store.

“They put their heart and soul into these businesses,” said Davis of the franchisees. “(They’re) far more willing to go above and beyond in how they serve customers.” 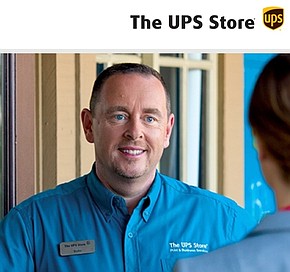 A Family of Franchisees

One of those owners is Burke Jones, who bought a Mail Boxes Etc. store in 1996 with his parents, after his mother had purchased her own franchise location. The younger Jones stayed with the business through the transition to The UPS Store, and he has owned seven stores over the years. Today, he operates two UPS Store franchises, in the Midway District and Pacific Beach.

“The brand is super strong,” said Jones, which translates into steady business for his stores. When he recently launched a “new build” store, “on Day One, I had customers.”

The UPS Store’s corporate office supports the franchisees by landing contracts with national firms such as Apple, Amazon and AT&T, which drive customers into the stores to return items with prepaid shipping labels, said Jones. The company also backstops its franchisees in such areas as cybersecurity and employee training.

“There’s a whole infrastructure behind us I would never be able to hold together ... as an independent operator,” Jones said.

On the con side, said Jones, the cost of a UPS Store franchise is greater than a less-established brand, and existing stores command a higher sales price. Currently, he said, there are no stores for sale in San Diego, which he attributes to how well the stores are doing.

More Than $2B in Revenue

The estimated startup cost for a standalone UPS Store franchise ranges from $161,657 to $470,031, according the company’s Franchise Disclosure Document. This includes an initial franchise fee, site rent and security deposit, leasehold improvements, equipment and supplies. By comparison, a McDonald’s franchise requires an investment of $1.1 million to $2.2 million, and a Dunkin’ Donuts franchise has up-front costs of $229,000 to $1.7 million, according to Entrepreneur Magazine’s 2019 Franchise 500 ranking.

UPS Store franchisees must pay monthly royalty fees equal to 5 percent of gross sales and commissions, less exclusions, as well as a 1 percent marketing fee and a 2.5 percent national advertising fee, according to the Franchise Disclosure Document.

Davis said annual revenue for the entire UPS Store network is more than $2 billion. (UPS, the parent company, reported revenue of $72 billion for 2018.)

Using a franchise model can benefit companies because it takes less capital to increase the number of stores in the network, said Nikhil Varaiya, a professor of finance at San Diego State University’s Fowler College of Business. And the franchisees get the benefit of the parent company’s marketing and purchasing clout, potentially saving on the costs of supplies and ingredients for their products.

In addition, he said, “the success rate for franchisees is very high.” He cited a study conducted a number of years ago by the U.S. Department of Commerce, which found that after one year, 97 percent of franchise startups were still in business, compared to 62 percent for independent businesses. After five years, the study found, 92 percent of franchises were still in business, compared to 23 percent of independent businesses.

Frank Caperino, who teaches a course on franchise management at SDSU and has extensive experience in both owning and selling franchise businesses, said the franchise model offers three major advantages: brand recognition for customers, the ability of franchise owners to command higher sales prices for their businesses, and a preference by the U.S. Small Business Administration to provide loans to franchise businesses.

On the downside, he said, when franchise networks are put up for sale, they are often purchased by private equity firms that want the steady revenue provided by franchisee royalty payments. Those owners are often less interested in building the business and developing new products and services than the original founders of the franchise companies, Caperino said.

Differing priorities between the parent company and franchisees can also lead to conflict, according to Tad Mollnhauer, president of the National TUPSSO Franchise Owners Association, whose members own more than 1,000 UPS Stores in the U.S.

Mollnhauer, who has owned a UPS Store franchise in Florida for 11 years, wrote in an email that UPS, the parent company of The UPS Store, in essence competes with the franchisees by offering shipping discounts to customers that can match or exceed shipping discounts available to UPS stores. The company has also developed programs to take advantage of The UPS Store network without consulting franchisees to determine the impact of those programs on the bottom lines of franchisees, Mollnhauer wrote.

“UPS appears to be focused entirely on using our national footprint to reduce their own operational expenditures and to leverage our network to promote their advantages over their competition,” Mollnhauer wrote. “In my opinion, we must find a way to reconcile these differing perspectives and conflicting agendas. The best way to move forward is with an honest and open dialogue that addresses the challenges that face the network today, tomorrow and in the years to come.”

UPS Store spokeswoman Jenny Robinson declined to respond directly to Mollnhauer’s concerns. But she said the company does have channels for considering issues raised by franchise owners.

“Like many franchise organizations, The UPS Store Inc. has committees in place (e.g., Franchisee Advisory Council), made up of franchisee-elected owners that represent and communicate the needs, suggestions, concerns, etc. of the franchise network to The UPS Store Inc. leadership,” Robinson wrote in an email.

In the meantime, the company continues to expand its offerings. For example, in recent years, The UPS Store has offered such services as 3-D printing and document shredding at some of its locations. The company is also testing smart lockers, where customers can pick up packages at any time of the day or night, said Davis.

The company is also looking to establish stores inside such businesses as supermarkets, pharmacies and hardware stores.

The rise in online shopping is also fueling an increase in the number of packages sent back to Amazon and other online retailers. Davis said as many as 30 percent of online purchases are returned. “We are doors wide-open for returns for large e-tailers,” he said.

Large shippers such as UPS are learning how to route packages to increase efficiency and cut costs. For example, rather than sending a returned item back to the distribution center, it might be sent directly to a different customer who has ordered that item.

“There are ways to reroute it to save time and money. That’s a value added for everybody. The poor old post office can’t do that,” Sterling said.

Companies such as The UPS Store are well-positioned to take advantage of the growth of e-commerce, Sterling said. “The future looks quite bright to me for The UPS Store.”