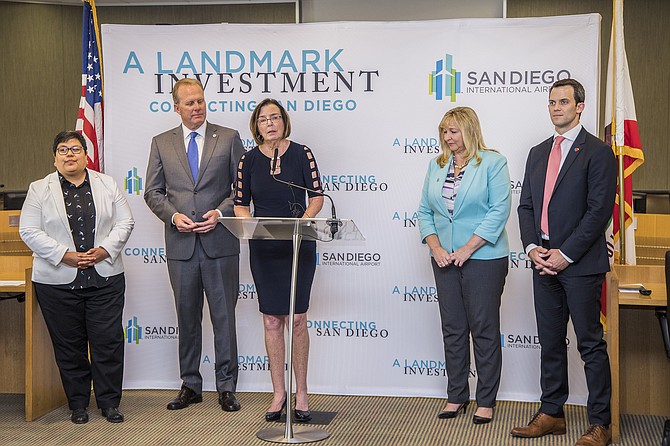 An agreement between the Navy Region Southwest and the San Diego Association of Governments has been signed that could potentially bring greatly improved public transportation to the San Diego International Airport. According to the document, the collaboration will allow the parties involved to explore possible options for redevelopment of the Naval Base Point Loma Old Town Campus.

“The ability to work more closely moving forward allows the Navy to better understand SANDAG’s goals and vision, and how they might be incorporated into the Navy’s redevelopment efforts,” reads the Commander, Navy Installations Command (CNIC) website. “The Navy remains dedicated to creating a more modern, efficient workspace on the OTC property to better meet the mission requirements of Naval Information Warfare Systems Command (formerly known as SPAWAR) and the other tenants on the property, while working closely with SANDAG and other entities, as appropriate, to foster robust community engagement for this project.”

The memorandum of understanding between SANDAG and the Navy is not a binding legal document, so, no official commitment has been made yet. What it does mean is an agreement has been made for the two to talk about using part of the 70-acre Navy property for potential transit space in the future.

“Today is a very important step forth in our effort to finally make it easier to get to the airport by using public transit,” said Mayor Kevin Faulconer in a news conference. “We will be closely examining, through this agreement, the possibility of creating a transportation hub to finally connect the trolley to the airport.”

According to reports, the Navy has been working on redeveloping its property for years. Its priority is making sure the Navy War Lab is updated before the Navy can consider accommodating any transit needs. Reports also suggest that developers would be more attracted to do a deal if the remodeling included transportation, offices, retail and housing along with a state-of-the-art military complex.

“We want to put something on the street that benefits the Navy and if, at the same time, we can benefit the transportation infrastructure of the whole area, that is fantastic,” said Capt. Mark Edelson of the Naval Facilities Engineering Command Southwest.