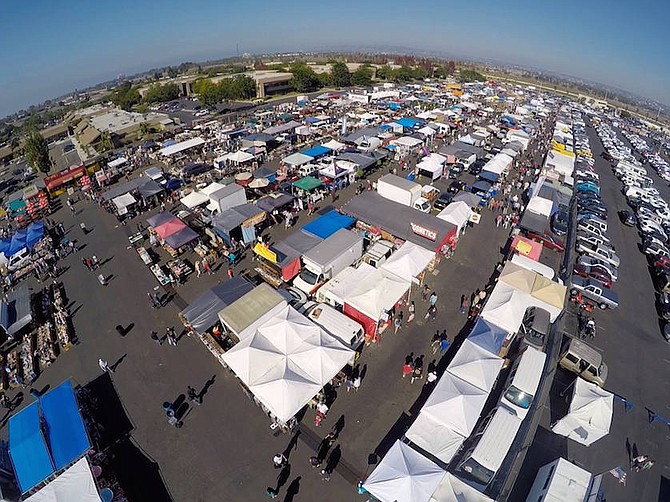 For the last two years, Kobey’s Swap Meet, founded in 1976 and with 45 employees, has hosted a handful of themed events, including a car show, a vintage event and a sneaker expo. Photo courtesy of Kobey’s Swap Meet.

In the face of online retailers like ebay and Amazon and big-box retailers like Target and Walmart, San Diego’s Kobey’s Swap Meet is reinventing itself in order to stay in the game.

“We are getting into the event business in order to supplement our regular swap business with specialty events,” said

Anthony Pretto, Kobey’s vice president of operations and grandson to founder, Monte Kobey. “Unfortunately, because of the way our industry is and because of digital competition, our revenue has kind of declined in recent years. So, we are actively trying to find ways to keep that stable.”

For the last two years, Kobey’s Swap Meet, founded in 1976 and with 45 employees, has hosted a handful of themed events, including a car show, a vintage event and a sneaker expo. The goal, according to Pretto, is to, by 2020, ramp up to one event a month “so that there is no negative growth, and so we can remind locals and tourists that we are still here and we are not going anywhere.”

As a result, Pretto said Kobey’s, which charges each vendor between $40 and $100 per booth depending on location, has seen an upsurge of a couple hundred people in attendance per event, who each pay $2 in admission fee (and $1 if over the age of 60). And, Pretto believes it will only continue to grow. He added that, even when there is a specialty event taking place, Kobey’s still runs its regular swap meet in the south part of the property, which is 35 acres in size including parking, in order to maximize on its efforts.

For its first sneaker event, held June 1, Pretto said Kobey’s recruited over 100 sneaker vendors, mostly from the West Coast. In October, Kobey’s will host its second sneaker affair and has already been contacted by sneaker companies based as far away as the Midwest and he said. A few months before, in August, Kobey’s will host an “All Things Vintage” encore to its first one.

At its peak, in the early ’90s, Pretto said Kobey’s Swap Meet was considered the third busiest tourist attraction in San Diego after the San Diego Zoo and SeaWorld and would have over two million shoppers a year visit them at the Point Loma-located Pechanga Arena (formerly the Sports Arena), where the Swap Meet has been held since 1980. Back then, upward of 1,000 vendors would set up shop on a Saturday or Sunday, said Pretto, adding that, to his knowledge, Kobey’s Swap Meet is still one of the busiest attractions as it currently attracts over 750,000 people a year.