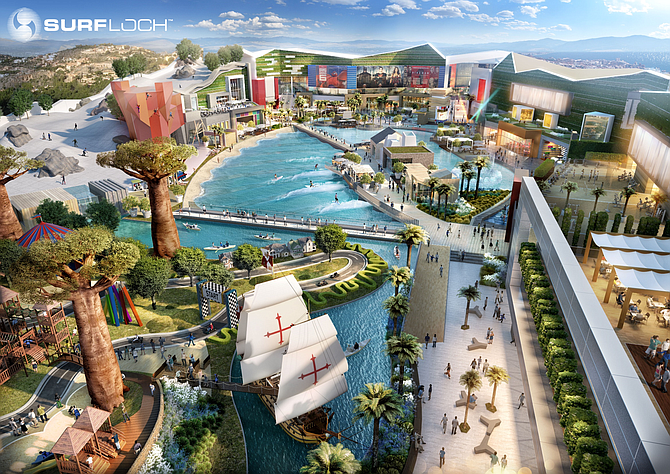 A wave machine from Surf Loch LLC is part of a retail concept proposed for Malaga, Spain. Rendering courtesy of Surf Loch LLC.

With the growing popularity of surfing as a sport and the advancement of manmade surfing technologies in recent years, experts in the industry predict surf parks are going to be everywhere in the near future. And, a couple of San Diego-based human-generated wave companies are ramping up to capitalize on the growing trend.

“Developing inland surfing venues is extremely complicated, expensive, and requires years of planning. We have been hard at work these past few years and are very excited to showcase our waves at full-scale to the world by the end of 2019.” said Scott Poehler, vice president of business development at Surf Loch LLC, headquartered in the UTC area. “Surf Loch was formed in 2015 by Tom Lochtefeld with a mission to pivot from stationary sheet wave attractions like the FlowRider, to develop a new technology focused on creating real surfing waves in large pools aimed to deliver an authentic surfing experience."

To Poehler’s point, artificial waves are all the hype in the surf industry right now.

In 2016, the Olympics announced its decision to include surfing in the 2020 Tokyo Olympic Games. That same year, two proposals received as part of the solicitation process for the Central Embarcadero project in downtown San Diego included wave parks. (The selected developer has since revised its proposed project and it no longer contains a wave park.) In 2018, world surfing champion Kelly Slater debuted his Kelly Slater Surf Ranch, the reported 10-years-in-the-works, $30 million artificial wave pool located in Lemoore. Earlier this year, Oceanside representatives confirmed to the media that a wave water park has been proposed for a former drive-in theater site in the area.

According to Poehler, “the 'artificialization' of outdoor sports from their pure form to a controlled commercial environment for wider use is nothing new. Skydiving, rock climbing, and skiing can all be enjoyed in man-made environments. Surfing is simply following that same path of evolution.

"Surfing is an elusive sport," he said. "Not everyone has the luxury of living by a coast with consistent waves or the time/budget to travel to pursue them. The need is there and growing rapidly, we just need to increase supply."

Willy McFarland, who handles business development at American Wave Machines in Solana Beach, said the company installed its first PerfectSwell surf pool at the Barefoot Ski Ranch Surf Resort in Waco, Texas, just last year. Invented in 2007, McFarland said it took all of that time to install the first PerfectSwell because of R&D efforts but also due to hesitation from buyers.

“In the past, there were some key failures in the industry that scared people away,” said McFarland, whose father is American Wave Machines founder Bruce McFarland. “The wave pool technology for a long time was bad — it just didn’t make good waves and would often leak. It quickly became an ‘I’ll believe it when I see it’ type of mentality. And then you have to consider the type of investment this requires. At that point, you have to convince people that it is going to work.”

These days, it appears that reluctance is quickly fading.

Since opening, the PerfectSwell pool at the resort has been booked every hour of the day, every day of the week, McFarland said. It costs surfers between $60 and $90 per hour and can host nine to 12 people per hour. Private bookings start at around $2,500 for an hour, with the park open from 11a.m. to 7p.m. daily.

McFarland said, depending on the specifications of any given PerfectSwell project, it can cost anywhere between $700,000 and $25 million to purchase one.

While Kearny Mesa-based Pacific Surf Designs Inc. isn’t in the business of making deep water waves like American Wave Machines and Wave Loch, CEO Yong Yeh is equally excited about the growth in popularity in the sector and said his company’s sheet wave surfing attraction can be a complementary product to the others.

“Our attractions are much smaller than those deep-water waves you see with people surfing with real surfboards,” he said. “Our waves would be a complementary product to those pools where people could congregate and hang out… It’s a different product, but it evokes the same lifestyle.”