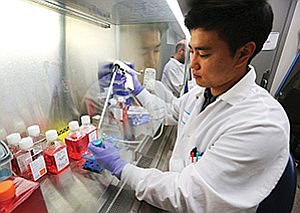 StemoniX — a San Diego biotech that grows micro organs from stem cells for drug testing — moved into a larger research facility this month.

The company wants to better predict how drugs will interact with patients, reducing the reliance on animal models and limited human testing that may not translate into a wider population.

Its new La Jolla facility has between 8,000 to 10,000 square feet of office and lab space, according to the company, at least four times bigger than its old space.

StemoniX, founded in 2015, was incubated at both EvoNexus and Johnson & Johnson Innovation’s JLABs. Its platform is called microOrgan.

“We have grown substantially in the past few years, necessitating opening an R&D facility fully dedicated to advancing our microOrgan platform technology,” said Ping Yeh, co-founder and CEO of StemoniX, in a statement.

“Our new facility will enable us to build upon these and other innovations involving our microOrgans, while at the same time, fostering collaborations with forward-thinking pharmaceutical and biotech companies,” Yeh said.

On that note, the building is close to pharmaceuticals like Takeda Pharmaceutical Co. and Janssen, along with research labs like Salk Research Institute for Biological Studies.

Yeh, who survived Hodgkin’s lymphoma after receiving maximum-potency chemotherapy that posed a risk to his heart, co-founded the company on the belief that there ought to be an improved way to test drugs for toxicity.

StemoniX’s intellectual property is derived from the specific way it grows stem cells. Its “structured” stem cells look and perform like the real thing, allowing drugmakers to test their products on cells for a human-like response.

The company has raised $26.1 million, according to Crunchbase.