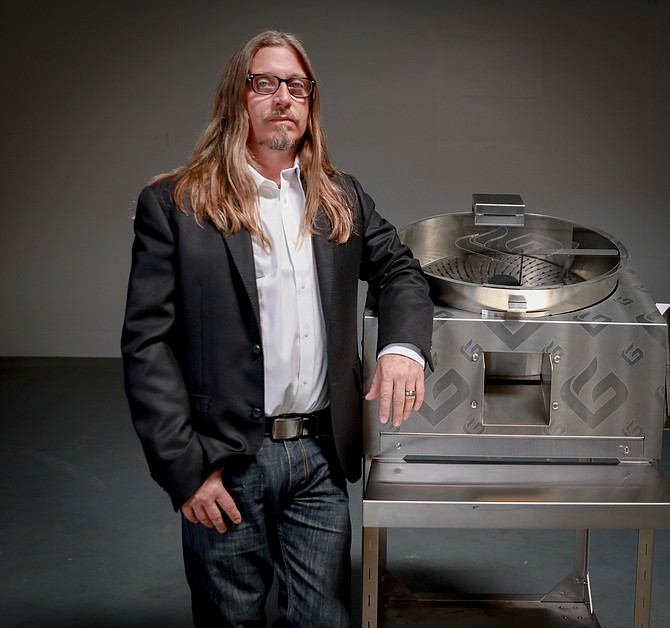 Cullen Raichart has always had a knack for mechanics and machinery.

As a teenager, he remembers helping his dad solve a problem he had with a machine by taking a part out of another machine and putting them together. His dad was astounded that Raichart could figure it out. For Raichart, it just seemed like the logical thing.

Later in life, Raichart worked as an engineering assistant for Hewlett-Packard’s science corporation and in electronic data systems with the United States Navy.

While he had either fixed or created machines from scratch almost his whole life, it wasn’t till 2012 that Raichart, born in Indiana and raised in Colorado, took his first invention to market. he created a cannabis sifter machine for a friend who was trying to make hash, he said. Inspired by his ability to make useful machinery for a growing market, that same year, he launched GreenBroz Inc., a company that manufactures harvesting equipment for the cannabis industry.

GreenBroz, headquartered in El Cajon and with about 25 employees, currently offers a sorter, a sifter and a de-stemmer and trimmer. Prices for the equipment range from $5,000 to $140,000 — the latter for a precision batcher micro-weighing machine GreenBroz sells for business partner Green Vault Systems located in Washington state. GreenBroz’s revenue in 2018 was $8 million. That number is projected to be $12 million by the end of 2019, said Raichart.

“I understand mechanical things very well,” said Raichart of GreenBroz’s success. “That is just how my brain works.”

According to “The State of Legal Marijuana Markets” report, released mid-2018 by Arcview Market Research and BDS Analytics, the legal cannabis business in the United States is projected to be a $23 billion industry by 2022. Revenue for the third quarter of 2018 for recreational marijuana sales was $93.1 million for the state, according to a California Department of Tax and Fee Administration report. This included cultivation, excise and sales tax.

Jon Baumunk, accounting lecturer at San Diego State University who teaches a “Business of Cannabis” class at The Evergreen State College in Washington, said it might make sense for a cannabis grower to have machines do the work in order to offset cost.

“At the end of the day, there has to be a cost consideration,” said Baumunk. “You have to ask yourself, is there going to be a cost savings by having the machines process the plant as opposed to human hands?”

Baumunk said that many purists in the industry may feel a machine can damage the product in the process but that it comes down to cleanliness and maintenance.

To launch GreenBroz, Raichart took money out of his 401(k) and took a vacuum salesman approach, he said, hitting the road and going from door-to-door to sell his product. After attempting to market his trimming machine without much success, he decided to redesign and upgrade the trimmer which caught the attention of an angel investor who eventually provided $150,000 to start the company. From that point on, Raichart said, “it has been off to the races.”

All of the GreenBroz machines are individual pieces that, through automation, can become a single unit that handle most, if not all of the steps involved in the cannabis growing industry, said Raichart. While he is behind all of the design, Raichart now has an engineering team that handles all of the details, he said.

Raichart said all of the machines are made, boxed and shipped from the El Cajon office with 90% of all materials sourced domestically and 98% of the products being recyclable.

Because of the reputation that GreenBroz has gained in the cannabis industry, the company also partners with other cannabis-focused businesses and helps them with product distribution. Raichart said they do a co-branding deal instead of white labeling (removing brand identification) and GreenBroz handles all distribution, sales and representation while the other company usually handles the build out, manufacturing and back-end support. Some of its partners include the above-mentioned Green Vault Systems as well as Puregen Group, based in California, and PurePressure, headquartered in Colorado.

While there is no cannabis industry certification available as of yet, Raichart said all GreenBroz products are UL Listed. Raichart added that GreenBroz recently partnered with Cannabis Club TV to bring its dispensary television network, HRVST TV, to GrowGeneration hydroponic stores, located throughout the state.

“We saw a need for marketing and information to be provided to hydroponic stores,” said Raichart, “so, we developed HRVST TV to provide information at point of sale.”

Raichart said the program will be closed circuit, controlled television and the data will be sent from a central location through a server.