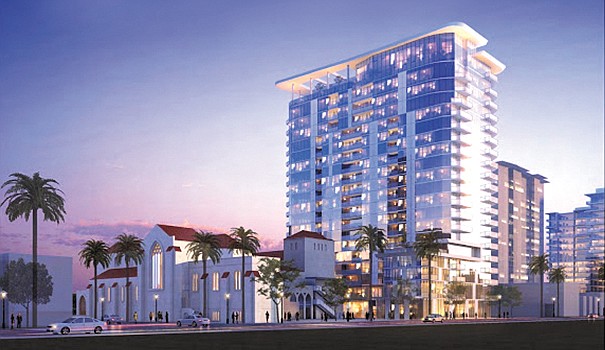 A 20-story apartment tower is being built by Greystar adjacent to St. Paul’s Episcopal Cathedral in Bankers Hill. Rendering courtesy of Greystar.

After years of planning and a few false starts, St. Paul’s Episcopal Cathedral has made a deal to redevelop property it owns in Bankers Hill into apartments and new church offices.

“It’s been in the works for 20 years and is part of our long-term plan to strengthen our financial future as well as giving us the opportunity to provide more housing stock in the city — rental stock,” said the Very Rev. Penny Bridges, senior pastor of St. Paul’s.

“If our deal in a small way just takes a little nibble out of the housing crisis, I think that’s a good thing,” Bridges said.

Greystar will build a 20-story apartment tower at Sixth Avenue and Olive Street adjacent to the cathedral.Neither Greystar nor St. Paul’s would say how much Greystar paid for the property.

The project will include church offices and room for community meetings on the first and second floors.

The tower will have 204 apartments, including 18 that will be designated as affordable for very low income individuals and families.

Bridges said that including affordable apartments was a critical part of the project for St. Paul’s.

The affordable apartments will be intermingled with market rate apartments throughout the tower, and will include apartments of various sizes.

“It won’t be siloed. It won’t just be the smallest apartments,” Bridges said. “It will be a representation of all the apartments.”

“We’re hoping to be able to offer some kind of startup incubator shared workspace,” Bridges said.

To make way for the new tower apartments, two vacant apartment buildings and a small church office building will be demolished.

“It’s going to be a beautiful building,” Rawi said.

Amenities will include a fitness center, a pool and a resident lounge on the top floor.

“It’s a phenomenal location, adjacent to Balboa Park in a really vibrant community in Bankers Hill,” Rawi said. “We’re up on a hill, so we’ll have 360 degree views of Point Loma, the (San Diego)-Coronado Bridge, downtown and the mountains in the east.”

The project will include a 10,000 square-foot courtyard between the tower and the cathedral, which Rawi said would be open to the public during business hours.

“It will really serve as a connection between St. Paul’s Cathedral and their new home in the (tower) building as well as a gathering place for the many special events St. Paul puts on through the year,” Rawi said.

The timing of the project is significant, Bridges said, because St. Paul’s is celebrating its 150th year in San Diego.

“We see this as a great kick off to a second 150 years to St. Paul’s Cathedral. We are literally a cornerstone to Bankers Hill,” Bridges said.

Greystar is the same developer that built Park 12 – The Collection overlooking Petco Park, where monthly rents range from $1,909 to $20,000.

Rawi said rental rates haven’t been set yet for the market rate apartments in the Bankers Hill tower.

Bridges said Bankers Hill is drawing developer interest because of “the mix of styles and ages of the buildings. It’s a mix of businesses and residential.”

The St. Paul’s project is unusual because most of the recent development in Bankers Hill has been for high-end condominium projects.

Darcy Miramontes, who leads the California multifamily team for the commercial brokerage firm JLL, said Bankers Hill along with Hillcrest and North Park draw people who want an urban flavor but don’t want to live downtown.

“Developers are looking for opportunities there,” Miramontes said. “I don’t think there will be an onslaught of new product up there just because there isn’t developable or redevelopable land up there.”

Most of the new development in Bankers Hill has been pricey condominiums because the land is too expensive for apartments, said Rachel Parsons, director of Moran & Co. apartment brokerage.

“The challenge has been that Bankers Hill is one of the only areas in the county where condo-land value has been higher than apartment land value,” Parsons said “Apartment developers, for the most part, are being outbid by these condo developers.”

Developers are charging $1 million and up for condominium units in Bankers Hill, so they’re able to pay top dollar for land.

“The challenge with downtown right now is the perception of over-supply when you look at all the cranes in the air,” Parsons said. “That’s not to say the downtown projects won’t be absorbed.”

Bankers Hill is “kind of like Little Italy,” Parsons said.

“Every developer would want a site in Bankers Hill,” Parsons said. “There’s a reason these boutique markets are so desirable.”