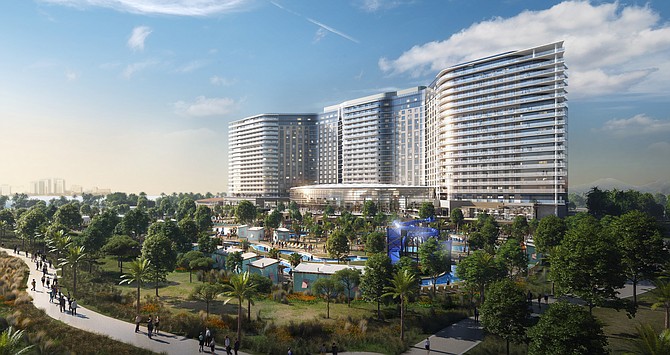 A key permit has been approved for a planned $1.1 billion hotel and convention center on the Chula Vista bay front, clearing the way for project financing. Photo courtesy of the Port of San Diego.

With a key permit at long last in hand, the developer of a $1.1 billion resort and hotel on Chula Vista’s bay front along with Chula Vista and Port of San Diego officials say they’re ready to move ahead with financing the project.

The Board of Port Commissioners in June issued a coastal development permit and formally approved the long-awaited project that the Port District and the city of C hula Vista plan to build in partnership with RIDA Development Corp., headquartered in Houston.

At the same time, the Port District and the city formed a joint powers authority to raise the money that they will contribute to construction of the 1,600-room hotel and 275,000 square foot convention center that RIDA will build.

“This is a really big deal. This is monumental in my mind,” said Ann Moore, Chula Vista’s representative on the Board of Port Commissioners.

“It is the last development permit that needs to be issued in order for RIDA to be able to pull building permits and actually start building and grading on the site,” Moore said. “Every day, I grow more and more confident.”

The port owns the 36-acre site of the project west of Marina Parkway between H and G streets.

The hotel and convention center would be operated by Gaylord Hotels, the convention hotel brand of Marriott International.

“We’ve done a tremendous amount of work to figure out the financing aspect and feel confident we can move forward,” Moore said.

She said the public financing portion of the project would come from revenue bonds backed by tax revenue raised by the hotel and convention center.

Stephanie Shook, redevelopment manager for the Port of San Diego, said $300 million in bonds would be sold by the Joint Powers Authority — with $240 million earmarked for convention center construction and the rest going toward infrastructure improvements such as new roads and utility lines.

RIDA President Ira Mitzner said that once construction starts, it will take about three years to complete.

“We think we have a project that’s both smart and buildable,” Mitzner said. “Overall, we’re confident that this is going to come together.”

Mitzner said he anticipates no problems in raising RIDA’s share of the financing.

“Given our experience with other large hospitality projects, we’re confident we’ll be able to finalize our financing,” Mitzner said, adding that company would use a variety of funding sources.

RIDA in December completed an $800 million resort project in Colorado — Gaylord Rockies Resort & Convention Center that has a 1,500-room hotel and 485,000 square feet of conventions space.

With interest rates declining, he said “it’s a good time to be in the market.”

“We feel we’re on a good trajectory,” Mitzner said. “The most important issue here is that this hotel, this project is desperately needed for the city of Chula Vista.”

Officials estimated that the project would generate $1.3 billion and create more than 2,300 jobs during construction.

Long-term, they estimated that the hotel and convention center would have an annual economic impact of $475 million and create 7,800 permanent jobs.

Chula Vista officials have been talking about redeveloping the city’s 525-acre bay front for more than 25 years.

They’re betting that the hotel and convention center will be the catalyst for further development.

“Once they started building the project, there were more businesses that started clustering around the hotel and convention center,” Salas said. She said the same is already starting to happen in Chula Vista.

“The further along we get in the approval process, the more companies come and pitch to us — nothing I can talk about now because it’s just too soon,” Salas said.

Despite years of false starts, “everybody feels it’s going to happen,” Shook said, of the Chula Vista project.

Sets the Stage for Construction

Approval of the coastal development permit “is really one of the biggest milestones for the project. It sort of sets the stage for construction. Financing is a big milestone too, but having this permit secured helps get financing secured,” Shook said. “It’s the furthest we’ve ever gone on this project and I think we’re really motivated to keep it going.”

The closest Chula Vista has come to getting a bay front project was a 2005 proposal by Gaylord Entertainment Co. to build a hotel and convention center.

That fell apart when Gaylord pulled out, saying that the planning and approval process was taking too long and off-site infrastructure costs, were too high among other things.

Gaylord Entertainment in 2012 sold its hotel brand to Marriott.

Mitzner said RIDA is committed to the latest proposal.

He said the hotel and convention center his company will build “should be a destination” that would attract visitors from throughout California.

“I could see folks, wealthy families south of the border coming up on the weekend and enjoying the beauty of this area,” Mitzner said.