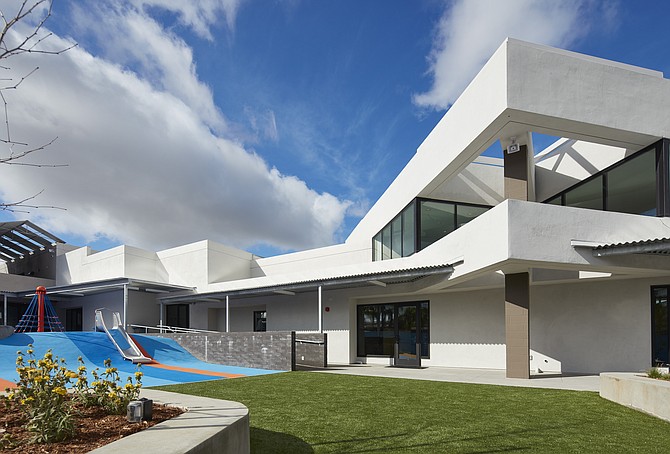 A drab, run-of-the-mill Kearny Mesa office building has been transformed into a magical land of airplanes and spacecraft in a school that’s carefully designed to meet the special needs of autistic children.

Dempsey Construction, working from designs by architect Kevin deFreitas and landLab Environmental Design, a landscape architecture, environmental design and planning firm, took this nondescript space and turned it into a special place that is the new home of the Children’s Workshop.

The result of the $5.6 million renovation is “a really fun, beautiful facility for kids that really need it,” said Ken Traupmann, executive director of the Institute for Effective Education, the parent company of the Children’s Workshop.

“It was a unique project because we got involved in the pre-construction part of it and helped with the design of space with the architect and the owner,” said Wes McNary, project manager for Dempsey Construction.

Dempsey Construction pretty much stripped the building at 9524 Kearny Villa Road down to its concrete shell to create an entirely new feel and look for the school with the designs by deFreitas focusing on flight as a theme in homage to the nearby Marine Corps Air Station Miramar.

Before the renovation, the building was “a whole menagerie of little suites,” deFreitas said, with office space for a dentist, a medical supply company and an accounting tax service. There also was a deli.

The remodeled building has three sections, separating students according to age.

The theme goes from hot air balloons and butterflies, to airplanes to space flight and rocket ships.

Each room has several separate huts or villages — small self-contained rooms in the middle and to the sides where teachers can work in a semi-private setting with individual students.

“The huts are multicolored. They’re all different shapes. They have these graphics inside that represent flight,” deFreitas said.

Each plywood hut is about 8 feet square and about 13 feet tall.

There’s also ample room for children and teachers to move freely around the huts.

“There are no straight corridors. There are these little paths that they can run through. It was all about making it fun, not traditional, not regimented,” deFreitas said. “There’s a lot of movement. It’s not like they go and sit.”

The huts also provide the one-on-one connection between student and teacher that Traupmann said is essential in dealing with the special needs children the school serves.

“The students we serve are very profoundly challenged,” Traupmann said.

School districts that are unable to accommodate the students contract with the Children’s Workshop.

“They (the schools) must serve these students but don’t have programs for their needs,” Traupmann said.

To give the new school a more open feel that would appeal to the students and their teachers, Dempsey Construction removed a series of garage doors in the rear of the building — replacing them with large windows to give the building more of an outdoor connection.

Skylights also were added to bring in more natural lighting.

Even the playground was specially designed to meet the needs of the students, including a tricycle track designed to look like an airport runway in keeping with the flight theme.

“The play area is not just a standard, rubberized surface,” said McNary of Dempsey Construction. “It’s got several different colorized patterns that make it stand out, make it pop.”

The grounds also have three tiers, with slides built into berms so children can kind of slide from one level to the other, deFreitas said.

Surrounding the school is a pale blue metal fence with silhouettes of children playing formed out of holes punched in the solid metal surface. 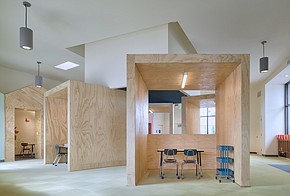 Small huts or villages are scattered throughout the interior of the remodeled Kearny Mesa building that is the new home of The Children’s Workshop. Photos courtesy of Dempsey Construction.

Aiming for Net Zero Energy Use

As part of the renovation, energy conservation equipment was added, such as sensors that dim interior lights in daytime.

“I have a feeling that when we’re done, it will be net zero (energy),” deFreitas said.

Traupmann said the remodeled building will give the Children’s Workshop room to grow.

Founded in 1972 in a small Bankers Hill house at Third Avenue and Nutmeg Place, Children’s Workshop moved to Camino del Rio S. in 2001 where enrollment ran between 45 and 50 students, Traupmann said.