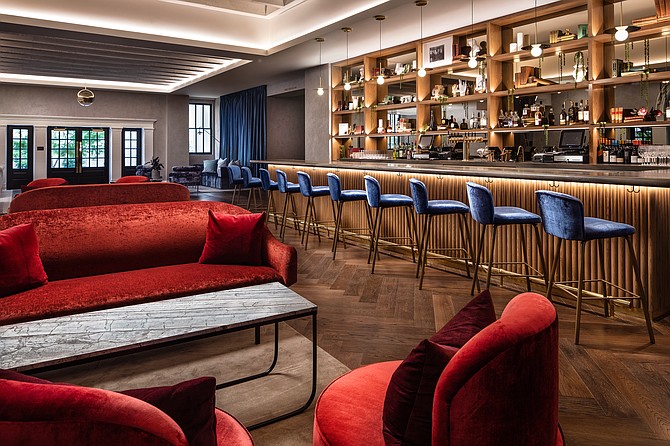 A lobby bar is one of the modern touches added in renovating the former Army-Navy YMCA to become The Guild Hotel. Photo courtesy of Robert Benson.

Walk into the newly-opened The Guild Hotel, a Tribute Portfolio Hotel, and there’s a sense of having stepped back in time, but not.

The 162-room hotel was carved out of the former Army-Navy YMCA building in downtown San Diego, and so much of the building’s history has been preserved, from the framed blueprints on the walls to the original stone staircase at its entry, arched windows, wall tiles and railings that it has kind of an old feel.

Yet, at the same time, it looks brand new, with plush furnishings and a very contemporary bar in the lobby.

Opened in November 1924 amid considerable fanfare at 500 W. Broadway, the building was far from its prime when San Diego-based Oram Hotels bought it for $14 million in 2014. The aging YMCA had dormitory-style rooms with shared bathrooms — far from the luxury accommodations that The Guild Hotel advertises with nightly room rates starting at about $289 going up to about $2,200 for the 1,100 square-foot penthouse with its 350 square-foot deck.

Costing about $80 million and taking more than three years, the renovation was especially challenging because of the age of the building and its historical significance, said Sormeh Rienne, designer and creative director on the project.

Rienne said that the “historic preservation and restoration had to be meticulous.”

“Structural reinforcement was also key, as was upgrading the building to today’s standards in terms of mechanical, plumbing, electrical, roofing and more,” Rienne said.

The dominant color scheme throughout the hotel is subdued gray, black and white but the lobby is a splash of color — partly as a subtle homage to the building’s military history with furniture in red white and blue meant to evoke the American flag.

“It’s not super obvious but it’s definitely giving a strong nod to the origins of the building,” Adyani said.

To the east side of the lobby is a cocktail/coffee bar with a weathered quartzite counter that runs about a third of the length of the lobby.

“It’s not a very traditional bar filled with liquor bottles. There’s a lot of art,” Adyani said. “We wanted our bar to be a design piece as well as a functional bar.”

The bottles are there, but discreetly kept pretty much out of sight.

The check-in desk is off to the side in an alcove that’s apart from the main lobby. 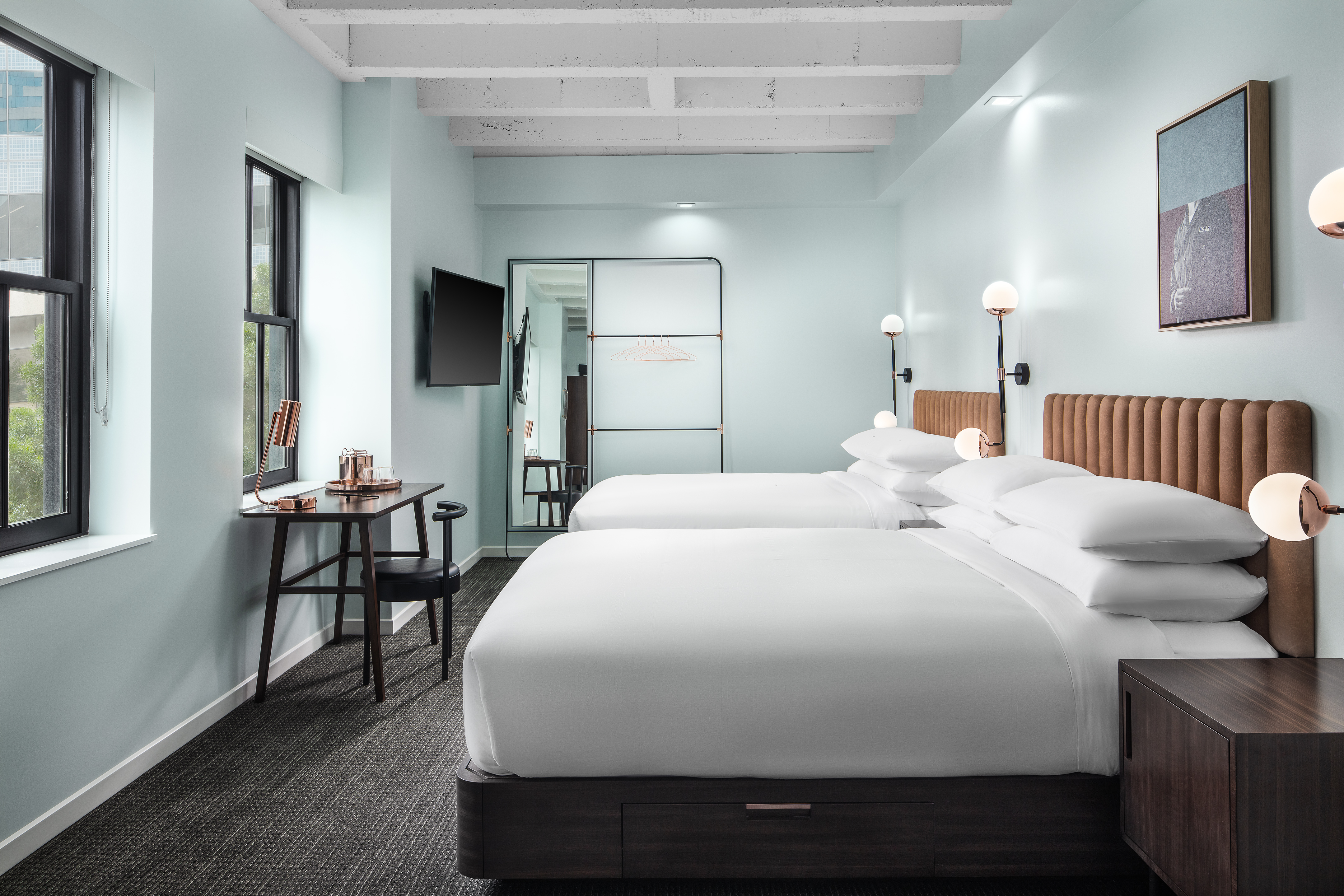 Guestrooms in The Guild Hotel are a far cry from the dormitory accommodations that were available when it was the Army-Navy YMCA. Photo courtesy of Robert Benson.

A former basketball court with its elevated running track has become a 3,500 square foot grand ballroom to the side of the lobby.

The elevated track still rings the ballroom, but it’s no longer used for exercise, functioning instead as a sort of stage for disc jockeys and other performances or as a speaking platform.

Across the lobby is Luca, the hotel’s formal dining room with an outdoor courtyard dining room, a fireplace and mirrors meant to mimic the building’s historic windows. Luca offers Mediterranean-influenced fare prepared under the direction of Executive Chef Justin Vaiciunas, according to the hotel’s promotional pitch.

A more casual dining area has been created to the rear of the lobby in what was once an alleyway separating the YMCA from a parking garage next door.

Called Grace Garden, the area has much greenery and the wall of the parking garage has been painted for use as a video projection screen.

On the lower level, the YMCA’s former swimming pool has become a 3,800 square-foot ballroom, with carpeting that mimics the flow of water. There’s also a conference room and a fitness center on the lower level.

The hotel has six room styles, most smaller than in newer upscale hotels.

The rooms also have a mix of the historic and modern, with high ceilings and original window frames with double panes to reduce the noise from passing traffic.

Each room also has original artwork and a plaque honoring a San Diego artist.

“The target market is what we call the maverick business traveler,” Adyani said. “They are looking for a unique, different luxury experience.”

Adyani said he also hopes that people who live and work downtown will be drawn to the hotel as a comfortable place to meet and gather.

San Diego has had several boutique hotels open within the past few years, and more are on the way.

What distinguishes The Guild from the rest is its connection to the past, said Alvin Mansour, co-founder of Oram Hotels.

Mansour said The Guild has “a personality and a history that is unlike any other in the city and we believe that today’s traveler seeks out properties and experiences that have a distinct, interesting story behind them like ours.”