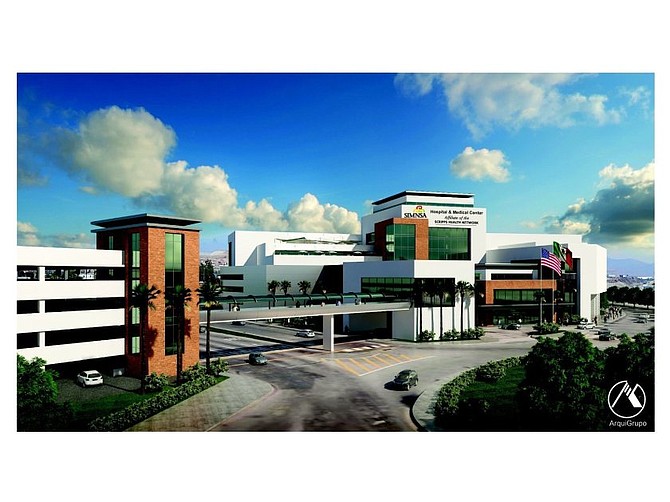 A rendering shows a binational hospital being built by Sistemas Medicos Nacionales S.A. in Tijuana. Scripps Health was slated to partner on the project, but no longer. Photo courtesy of SIMNSA.

Scripps Health is no longer partnering on a Mexican hospital geared toward cross-border care.

In 2016, Sistemas Medicos Nacionales S.A., or SIMNSA, tapped Scripps to act as a consultant on the 120-bed hospital near the San Ysidro Port of Entry. Scripps was slated to help with planning, construction and operations.

In a statement Scripps said the parties were unable to secure a final deal.

“While we are always open to cross-border opportunities, there’s nothing we can speak about right now,” said Scripps, which declined an interview request.

It’s unclear when the deal fell apart — and why. SIMNSA also declined to comment.

SIMNSA has long operated a binational health plan, as well as medical clinics. The company caters to local employers offering health benefits to Mexican nationals who work in San Diego, with plans that can be one-third the price of comparable U.S. products.

SIMNSA has stated the multiphase hospital is expected to be finished next year, equipped with emergency, cardiology, neurosurgery and oncology services. It’s an outgrowth of SIMNSA’s eight-story medical clinic in Tijuana.

The deal with Scripps was originally touted as the first binational collaboration on a hospital for patients on both sides of the border. Scripps had said it would be co-branded as an affiliate of the Scripps Health Network.

“We have been looking for opportunities to expand the Scripps Health Network and our agreement with SIMNSA is the perfect way to do so in Mexico,” Scripps CEO Chris Van Gorder said in 2016 in a news release.

Besides SIMNSA, Chula Vista-based MediExcel is the other cross-border player in the HMO market. A few years ago there were three companies offering such plans.