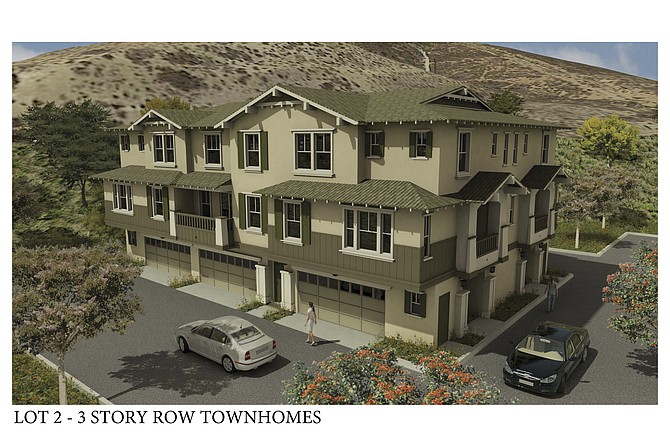 As proposed by developer Doug Wilson, a Spring Valley housing project would consist of 218 townhomes. Rendering courtesy of Douglas Wilson Cos.

San Diego developer Doug Wilson is looking for someone to step in and take over a Spring Valley townhome development he’s been working on since acquiring the land in 2014.

The 52-acre site at the corner of Sweetwater Spring Road and Jamacha Boulevard is vacant land but Wilson said he’s gotten the property fully entitled so construction could start immediately.

“In the county there are very few sites that are entitled that are ready to go that you can actually build on,” said Wilson, CEO of Douglas Wilson Cos.

Under the entitlements he received, the property must be used for the project as he envisioned it, with only minor changes, Wilson said.

The project would consist of 218 townhomes, of two to three stories ranging from 1,100 square feet to 1,800 square feet.

“These are built in clusters of four units and six units and eight units, which is typical in this price range,” Wilson said.

That’s about to change.

Wilson said a single-family home development is going in across the street from his company’s property and the county is building a seven-acre park nearby.

Under agreements Wilson’s company made to the community planning group and various government entities, 28 acres of the site must be preserved as open space to protect Hansen’s Creek, which flows through it.

The buildable portion of the site would be divided into three communities, with open space between them, as planned by Wilson.

Wilson’s company of late has been focusing on building assisted living centers.

“We’re not a homebuilder,” Wilson said. “We always intended to entitle the ground and take it to market.”