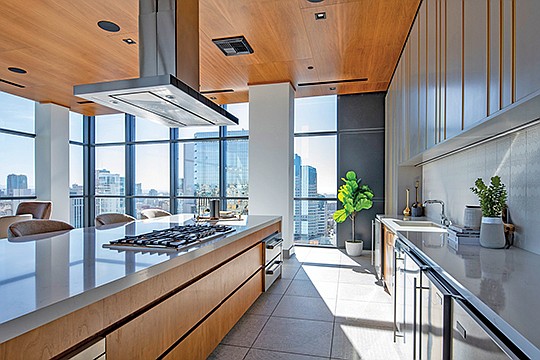 The 24-story tower was built by LMC, a Lennar Co. that also built the 21-story Shift apartments in East Village.

The exterior of Luma is not quite as dramatic as the angular reddish-orange Shift that has red and black stripes running up and down the building in a design meant to evoke the artsy and eclectic nature of the East Village neighborhood.

Luma, billed as “a luxury high-rise,” has a more conventional glass and steel exterior which LMC described as “sleek.”

Lennar Multifamily Communities LLC acquired the site for $12.8 million in May 2015.

LMC won’t say how much it cost to build Luma.

The newcomer at 1440 Columbia St., has 220 apartments and 4,344 square feet of retail space, with retail tenants still to be announced. The building is LEED gold certified.

The target demographic as described by LMC is “single professional/entrepreneurs, empty-nesters, high income urban couples and singles, 30s to 40s no children, and renters by choice.” The apartments have nine-foot tall ceilings and LMC’s Dream Suite by Lutron that enables residents to control lights, roller shades and thermostats from smartphones.

Building amenities include concierge service, a rooftop pool and spa with lounge space and casual seating, a deck with an outdoor theater, barbecue grills, a fitness center, a clubhouse, bicycle storage and repair stations and a pet park with a washing and grooming station.

“The Little Italy neighborhood is one of the most distinctive in the nation, whether it’s the breathtaking views of the waterfront or the always bustling sidewalks and patios,” Ryan Gatchalian, LMC Southern California division president said in a news release.

“We’re thrilled to join one of San Diego’s most desirable neighborhoods, and we believe Luma will complement the area’s vibrant energy and provide a top-tier downtown living experience,” Gatchalian said.

Carrier Johnson + Culture was the architect on Luma. Swinerton was the general contractor.