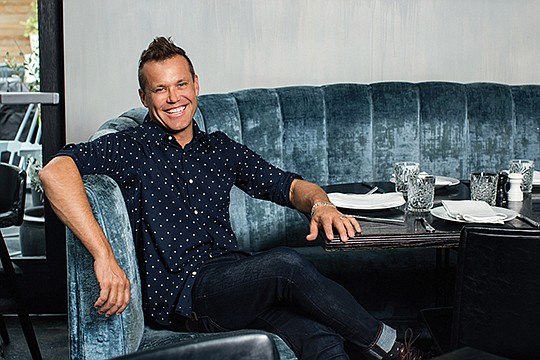 Chef Brian Malarkey doesn’t shy away from the spotlight.

On any given day, you can find the San Diego-based, Oregon-raised restaurateur serving as a judge on Food Network’s “Guy’s Grocery Games” and making regular appearances on nationally-televised programs like “The Today Show” and “Good Morning America.”

Malarkey welcomes his celebrity chef status not because he’s presumptuous — although seeing one’s name in bright lights can be exciting. But, because he understands how instrumental the reputation and on-camera-presence has been for the growth of his Puffer Malarkey Collective.

Launched in 2016 with partner Christopher Puffer, the restaurant group has five properties: Herb & Wood, Herb & Eatery, Green Acre Campus Pointe, Green Acre Nautilus and Farmer & The Seahorse. In 2018, Herb & Wood made north of $9 million alone. The group’s revenue growth from 2017 to 2018 was close to 10 percent. Two more concepts, Herb & Sea and Animae, are already in the works, each for a debut. To date, the Little Italy-headquartered company has approximately 250 employees.

It’s been huge,” Malarkey said about the impact that being a public figure has on his business. “Back in those days when I started, there weren’t all of these reality shows or YouTube, Netflix or anything like that that was hugely popular. Luckily, I’ve still been able to stay on TV with a lot of stuff on the Food Network, ABC’s “The Taste” and appearances on ‘The Today Show’, among others.” He adds that he also currently has a national commercial on NBC’s Bravo for a company called Monogram Appliances.

Although the air-time is an added bonus for Malarkey and his company, it isn’t all a business needs to succeed.

Here, he shares with the San Diego Business Journal readers what makes his group profitable, his thoughts on tip credits, why Uber is a gift to the restaurant industry and what else he’s got cooking up this year.

When did you realize you wanted to be a chef?

I grew up in Bend, Oregon, on a ranch, raising our own beef and with gardens. I was brought up by a single mom, and, so, to help, I started cooking for the family when I was young… I went to college for a little while, but I soon realized I wasn’t a nine-to-five type of guy… One day my dad said, ‘why don’t you go make a living doing what you enjoy?’ I said, ‘what is that?’ He said, ‘you’re a cook.’ So, I went to culinary school, then went to work at a restaurant in Los Angeles called Citrus, and fell in love with teamwork, passion, energy — the whole thing. That is where I got bugged.

How did you go from employee to owner?

I worked at Citrus for a while, and then I moved to the Midwest, to Minneapolis, to be exact. I worked at a restaurant there, and I was doing photography for a little bit on the side. I traveled to Europe and was having fun. After about five years of that, I moved to Seattle and worked at restaurants there. That’s when I had an opportunity to come here (to San Diego) and open Oceanaire Seafood Room about fifteen years ago. I ran that for five years and then opened my first restaurant, Searsucker, in 2010. That was shortly after I appeared on Bravo TV’s “Top Chef.”

How did you and Puffer come together? And, why decide to launch your own group at that time?

I met Puffer at Oceanaire where he was the general manager and when I was ready to open Searsucker, I asked him to join me. I was essentially an owner in Searsucker — a partner at the time. I sold majority interest to Hakkasan Group about three years ago and stayed on for a while, but, now, I’m done. I still remain ownership, but, I do not work for them anymore.

With our own restaurant group, Puffer and I get to call all the shots. Plus, we wanted to get back in the big game and that’s when we decided to open Herb & Wood and Herb & Eatery (in 2016).

How did you put the money together to launch your own group at the time?

I have incredible investors who have worked with me for a long time and believe in me. It is a handful of them, but, there is one key investor. I met them through doing charity work together.

How hard was it to break into the food and beverage scene in San Diego?

Searsucker put us on the map. It showed people we knew what we were doing and we knew how to do it. It has been wildly successful since the day it opened.

How competitive is this scene?

This is such a great community and San Diego really supports locals. There are lots of big restaurant groups that think they will come to San Diego and take over, but, they don’t always get the support of the locals. I always say, we are built for locals, by locals. And, tourists tolerated! If you build the restaurant for the locals, then, they will support you through thick and thin.

You are known for fine-dining, but then there is Herb & Eatery, which has more of a market/café type of feel. What was the vision for that?

That space was just a big empty shell. We knew how to do the fine-dining part: wood-fire grill, proteins, pastas, pizzas, and a kind of Mediterranean-American fare. But, there was this upstairs part to it and we just let the building talk to us. The café was different with a lot of retail, a wine shop, salads and sandwiches.

Many people dream of opening up a restaurant. Is there something we don’t know about the difficulty of the business that you can share from your experience?

Often times, when I hear people say this is my dream, I say, ‘do you know having a restaurant is like having a child that will never grow up? You will have to change diapers, not go on vacation, wake up with it in the mornings, go to bed with it at night.’ It will bring you great joy, but, it will be like a child that will never leave you. There is constant babysitting. But then, it’s like, if you can have one, why not have more?

Is there any talent or staff shortage in San Diego?

The back of the house is really hard. I don’t think a lot of people want to be cooks or chefs anymore. Plus, there are just lots of great restaurants here. Front of the house is easier. San Diego makes it easy because there are lots of young people here that just want to live at the beach. There are a lot of people in the service industry that are young and want to just survive and have fun.

How do you respond to rising wages?

Everyone is entitled to make a good living. It is expensive to live in San Diego. I do wish, though, that we had a tip credit law in California. We would be able to pay the kitchen staff more money if they passed that law in our state.

What has helped the restaurant industry recently that most people would take for granted?

Uber. Uber has been a huge gift to the restaurant industry. We are not worried anymore about finding the right location in specific spots because now you can take an Uber and get to any area easily.

What do you say makes Puffer Malarkey Collective successful?

I am positive that it is because we hire very well. We hire people that have a shared vision and goals as us. And that is just to have a great ambiance, with great food and great service. At the end of the day, it’s easy if you do those things right: you cook the food, you serve the food and everyone has a great time. It can be the hardest thing in the world, but it can also be easy.