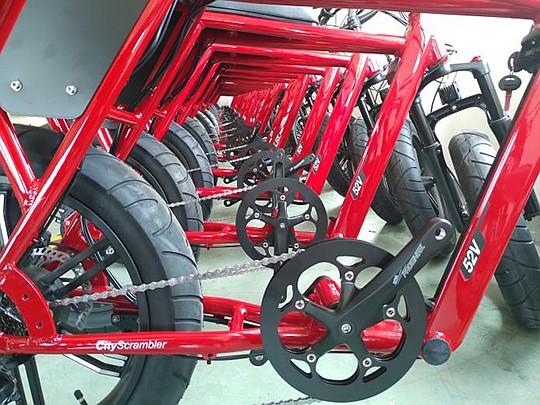 Juiced Bikes opened a manufacturing facility for its electric bicycles in China. Now, the company is facing a 25 percent import tariff on its products. Photo courtesy of Juiced Bikes manufacturing

Juiced Bikes celebrated opening its first factory in China just over a year ago. The electric bike company, which has about 20 employees at its Chula Vista headquarters, had big plans for growth.

Juiced Bikes had built up its cash reserves through a strong holiday sales season and a successful crowdfunding campaign, where the company raised just over $1.1 million. Then, last August, a 25 percent U.S. tariff on imported electric bikes let the air out of its tires.

“Our supply chain doesn’t have the flexibility to move production to new locations so we’re forced to pay the tariffs at the expense of our growth plan — which includes hiring local workers here in San Diego and bringing competitive paying jobs to the area,” Scott Anderson, the company’s marketing director, wrote in an email.

The company had to pay hundreds of thousands of dollars to get stock released for orders made before the tariffs hit. Unable to recover its investment, Juiced Bikes raised the prices of some of its products.

Juiced Bikes isn’t the only local company to have been rattled by the ongoing trade war between the U.S. and China. The sweeping tariffs hit San Diego’s technology and energy sectors hardest, causing companies to raise prices or shift their supply chains.

According to the U.S. Chamber of Commerce, the retaliatory tariffs affect more than $13 billion in California exports to China, on top of an additional $1.6 billion in combined exports to Mexico, Canada and the European Union.

Recent reports hinted that the U.S. and China are getting closer to reaching a deal, but it’s difficult to say when — or if — that will happen. Even with talk of potential relief from the tariffs, San Diego companies are focused on recovering their losses.

“I am hopeful the two governments come to an agreement on trade; however, it is not clear that will happen anytime soon and it is not clear if the tariffs will go away as part of any agreement,” said Joe Wilkinson, chief financial officer of Taiyo Yuden USA Inc., a Japanese electronics company with offices in Solana Beach. “The main issue in my industry is that it is highly unlikely that our products would ever be made in the U.S., hence, these tariffs will not bring jobs back to the U.S.”

Wilkinson said Taiyo Yuden had to adjust its strategy after being hit by a 25 percent tariff on the import of Chinese goods. The company has passed on some of the cost to its customers, and set up a foreign-trade zone to process the products it imports that are bound for consumption outside of the U.S.

It’s not a perfect solution, though: Setting up the foreign-trade zone has cost Taiyo Yuden productivity and operating income. Wilkinson said operating it has cost the company an additional 5 percent of the revenue it generates in China, and the resulting paperwork also raised logistics costs for its customers.

“We are also working with some of our larger distribution customers to ship directly to Mexico as they are working to setup new warehousing outside the U.S.,” Wilkinson wrote. “Another solution is to move production out of China to locations where we have existing manufacturing. This solution is difficult given the cost and drain on factory capacity.”

Most companies, like Taiyo Yuden and Juiced Bikes, end up eating the cost of the tariffs or passing along the increased costs to customers. Nikia Clarke, executive director of the World Trade Center San Diego, said small- and middle-market companies are affected most because they don’t have the resources or flexibility to change their manufacturing.

“Depending on how large of an increase that is, that’s enough to make you not competitive,” Clarke said. “As these barriers go up, the larger multinationals who can afford to be a little more agile, for them, it’s a matter of math. … If you’re a small- to mid-market company that has been able to build your company because of cheap manufacturing in China and export all over the world, that’s enough to sink you.”

Paola Avila, vice president of international business affairs for the San Diego Regional Chamber of Commerce, said the longer the trade war continues, the more likely some businesses will close as they’re unable to absorb the costs.

“As companies have their orders cancelled or a decrease in demand, that’s adversity on top of the other issues a company might be dealing with,” Avila said.

Hundreds of thousands of companies are seeking exemptions from the U.S.-imposed tariffs. The U.S. Department of commerce has received so many of these requests, that they’re still being processed, she added.

“We’re watching the tech space really closely,” Clarke said. “It’s not so much the tariffs you’re watching but qualitative retaliation.”

In other cases, Avila said, tech companies seeking trademarks or patents in China are seeing an effect on their applications.

To help guard against this type of pushback, companies that can afford to are stepping up their presence in China to make up for tense national relations.

“In some cases, you’ll see companies are making a greater effort — traveling to China and holding increased meetings,” Avila said. “Bigger companies can engage with their counterparts, business partner or the government in China to work and strengthen that relationship.”

For smaller companies, that might not be able to afford these types of overtures, long-term tariffs could put them in dire straits.

“It’s all about how long can we sustain an impact,” Avila said. “Is it short-term pain for long-term gain? What if the trade war continues? At what point is it a breaking point?”

Those questions are an important part of the math for companies dealing with the tariffs. At the heart of the matter, the U.S. and China are negotiating how intellectual property is treated. Recent reports indicate the U.S. and China have made some progress on talks to lift tariffs, but the underlying issue of patent protections is still a sticking point.

Michael Polin, a San Diego attorney who specializes in international business law, said to do business in China, companies have to strike a joint venture with a Chinese company, which often results in the transfer of their intellectual property.

While those terms may sound abysmal, Polin said it’s still appealing to companies because of China’s vast market of 1.5 billion people. By capturing a small slice of it, they seek to reap billions.

“(Copyright law) has gotten better but it’s still nowhere near what it needs to be,” Polin said. “These kinds of issues directly impact San Diego because we are an IT hub.”

With tariffs slowing down the Chinese economy, Polin expects to see the two governments strike a deal soon.

“People on the ground are saying, why are (Starbucks) drinks getting more expensive?” Polin said. “There’s a lot of pushback. The one thing that scares the Chinese government the most is unrest.”

Despite the glimmer of hope that boosted stocks on Jan. 18, the market, for the most part, remains pessimistic about the two governments striking a deal. The uncertainty itself can be disruptive to companies as they try to plan for the future.

No matter when the tariffs end, Avila, Clarke and Polin agree on one thing: China, as a market, is too big to ignore.

“It will be a really interesting relationship to watch. I think the next few months will be really critical,” Clarke said. “The days of cheap China as a global manufacturing operation are over. They’ve been ending for a long time. But the Chinese market is still a really compelling reason to get China right, and take a long-term view of the opportunities there.”