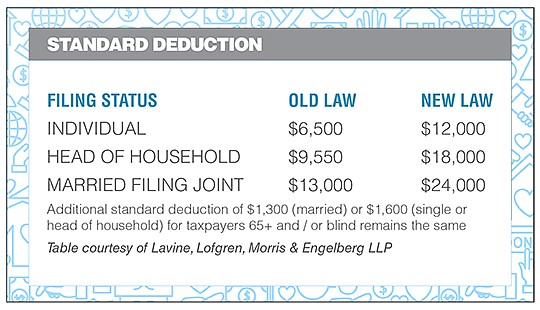 Passage of the Tax Cuts and Jobs Act in 2017 came with some speculation that the law would put a damper on charitable giving.

“It hasn’t happened,” said Gary Krahn. “We can’t explain why or why not.”

With the hike in the standard deduction and a cap on property tax deductions, Krahn thought there could be a decline in giving. Instead, contributions to La Jolla Country Day are up 15 percent this year, and campaign participation is up 10 percent.

The small number of nonprofits approached by the Business Journal in January said they have noticed little to no impact from the new law. John Trifiletti, chief advancement officer at The Bishop’s School in La Jolla, reports “no major difference.”

“Charitable giving remains strong in the San Diego region,” Brian Zumbano, vice president, chief development officer and stewardship officer at The San Diego Foundation, said in a statement. “Contributions from the first half of 2018 were reflected in our record-breaking $64 million in grant awards and $143 million in charitable contributions from fiscal year 2018. Fiscal year 2019 began July 1 and is closely trending last fiscal year with equally strong giving and contributions.”

Andrea Muir of Episcopal Community Services reported increased donations and increased gala revenue. The population that the tax change might impact most, Muir said, is midlevel donors who rely on their charitable deductions. “People with significant wealth will continue to give because it is the right thing to do, it feels good and they feel connected to the organization.”

The feared impact on charitable giving goes back to the either-or choice people face on their personal taxes: Take the standard deduction or itemize deductions.

Like helium balloons, charitable contributions can gave itemized deductions the lift they need to reduce a taxpayer’s liability.

Enter the Tax Cuts and Jobs Act, which has its own lift. With the new law almost doubling the standard deduction for individuals and married people filing a joint return, some observers concluded that fewer taxpayers would itemize their deductions.

The standard deduction for a married person filing a joint return increased from $13,000 to $24,000. It follows that a person would need to have itemized deductions exceeding $24,000 to decrease their tax liability.

“If you don’t have high medical expenses or a mortgage, your only other itemized deduction would be charity,” Barrow said. “So theoretically the first $14,000 of your charitable donations would in effect not be tax beneficial. There is no real tax deduction for those $14,000 worth of donations.”

Even under the new law, charitable donations remain a way to cut tax liability.

Wealthy individuals looking for a tax break could consider “bunching” their charitable contributions by giving on alternate years, Barrow said. For example, if a person donated $10,000 annually, she could give $20,000 one year and skip the next year.

In another tax-saving strategy (technically not a deduction), some clients opt to take a distribution from an individual retirement account (or IRA) and donate that directly to charity, Barrow said. Such deductions become mandatory at age 70½.