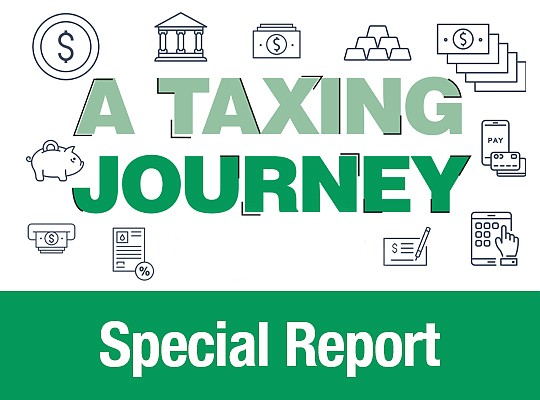 Five Things to Know About the New Tax Act

Here are some key provisions of the Tax Cuts and Jobs Act:

• New limitation on interest expense deductions — Companies will need to look at their leverage model as interest deductions are effectively limited to 30 percent of EBITDA (earnings before interest, taxes, depreciation and amortization).

• Reduced rates for individuals — Tax rates were lowered across the board, with the maximum rate dropping from 39.6 percent to 37 percent.

• 20 percent pass-through deduction on qualifying income — This was one of the most significant “wins” for small-business owners, as it allows for an immediate deduction of up to 20 percent of income from qualifying activities (bringing the 37 percent rate mentioned above down to 29.6 percent).

• Changes to deductions for individuals — The standard deduction was increased dramatically, but what may impact San Diegans the most is the limitation on deductibility of state and local taxes. It’s important to consider this impact along with the lower rates, as the end result for many San Diegans might not be the expected decrease in taxes.

Lastly, always connect with your tax adviser to see how these specific changes would apply to you and your business.

— Courtesy of Kevin Dusi, partner with

It is big. Its changes are sweeping.

The new tax law is esoteric. To hear accountants talk, it is a thicket of fine points and footnotes. Among the minutiae: sporting events, such as a golf trip or a luxury box at the stadium, are no longer deductible expenses.

It is a work in progress. More than a year after it passed, the tax law is still being interpreted, and CPAs are waiting for more interpretations.

And it is a monopolizer of conversations. Some 75 percent of his firm’s discussions seem to revolve around it, noted Raj Rajan, managing director at CBIZ MHM LLC in Irvine, who is a tax practice leader for all of his firm’s California offices.

The 2017 tax overhaul was the work of President Donald Trump and the then Republican-dominated Congress. It is both business-friendly and very complicated.

WD-40 Co. — the Scripps Ranch company that distributes its lubricants, soaps and other chemicals all around the world — is feeling the effects of the new law. Notably, the overhaul lowered corporate tax rates from 35 percent to slightly more than 20 percent, said Jay Rembolt, WD-40’s chief financial officer. “That’s a big impact right in and of itself.”

On top of that, Rembolt said, the tax rewrite “changed a lot of what I would call the underlying structure around tax.” The latter change “requires a lot of work to ensure that you understand all of the ramifications of the tax legislation and how it impacts each situation.”

Because of the law, WD-40 brought some of its foreign profits back to the United States. According to a recent securities filing, during the first quarter of fiscal 2019, WD-40 repatriated a portion of its unremitted foreign earnings — $20 million — from its United Kingdom subsidiary. It used the funds to repay $20 million of outstanding draws on the company’s line of credit. Costs associated with making the change were immaterial to its consolidated financial statements, the company said.

WD-40 will no longer consider foreign earnings as indefinitely reinvested in that country, the SEC filing said.

What about business income that can appear on an individual’s tax returns? That is one of the most talked-about aspects of the 2017 act.

For individuals involved in certain types of businesses — those structured as sole proprietorships, partnerships or S corporations — the new law provides a 20 percent deduction on qualifying pass-through business income.

“Most small businesses are pass-through,” said Jessica Dorsett, partner with Polito Eppich CPAs and Business Advisors in San Marcos. The firm’s clients are largely businesses with revenue between $2 million and $50 million, “the backbone of San Diego,” Dorsett said. Generally — and it’s a gross generalization — businesses get to pay taxes on 80 percent of their profits. That is major benefit for small businesses, she said.

Granted, there seem to be many ifs, ands and buts to the new law … enough to make a trip to the tax planner a necessity. But the consultation may be worth it. Kevin Dusi of Moss Adams LLP noted the 20 percent deduction could bring the maximum tax rate on qualifying income down from 37 percent to 29.6 percent.

The new law might also stoke the fire of debate over whether a company should structure itself as an S corporation (such as a partnership) or a C corporation. Again, there are many variables. An overview of the new law from Lavine Lofgren concludes that what seems like the obvious answer might not be the best answer.

Individual taxpayers will find standard deductions under the new tax law much higher, but may miss out on big deductions they enjoyed as California residents (see related story on page 14).

“It’s the wage earners who don’t have children that are going to be hit with tax,” said Dorsett.

Some aspects of the new tax law have a “Cinderella” quality, said Ronald Friedman, tax partner with PKF San Diego. They last for only a short while. After a limited number of years, the carriage turns back into a pumpkin.

The last sweeping change to the tax code came in 1986, though Friedman said the 2017 rewrite is much more complicated.

Most of the accountants interviewed said the new rules require long hours of reading and time with consultants.

“The tax code’s fairly convoluted and there’s a lot of cross-referencing,” said WD-40’s Rembolt. The tax code’s authors, he went on to say, “apply certain provisions in some cases and then not in others. I would say there’s a lot of complexity that’s built in, and when you have a change like this, the cross-references are quite significant. We find things that are applying in certain cases that you wouldn’t expect. It’s just a lot of work on the part of the accountants to sort this out.”

The Treasury Department periodically comes out with more guidance on the new law, said Brad A. Graves, tax partner with Haskell & White LLP in Irvine. The firm also has a San Diego office.

The government recently released an interpretation of Section 163(j) of the tax code, which deals with the limitation on the deduction for business interest expense. It stretches more than 400 pages.

“CPAs are poring through that right now,” Graves said.

Michele Barrow — who just made partner at Lavine Lofgren — advises caution in approaching the new tax code. One of the worst things a person can do is try to figure it out with an internet search.

“Google is not always the best tax advice … ,” Barrow said. “Always talk to a tax professional.”