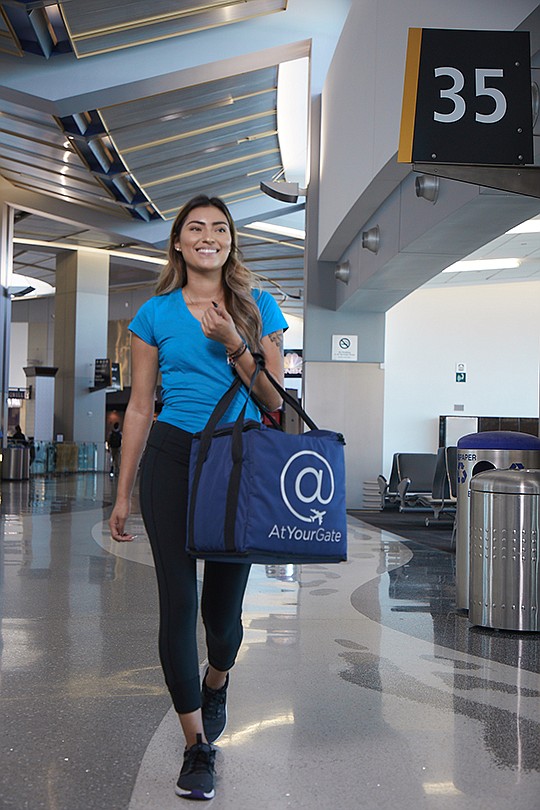 Passengers and airport employees make food and/or product orders on the AtYourGate app, and the delivery person brings it to them within 20 to 30 minutes. The service can also deliver things like headphones and last-minute gifts. Photo courtesy of AtYourGate

A year after officially kicking off at San Diego International Airport, the locally based in-airport food delivery service, AtYourGate, continues to expand. 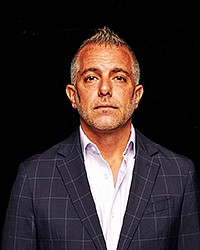 AtYourGate founder and CEO Paul Joseph “PJ” Mastracchio recently announced the company is now operating out of five airports: SAN, Newark Liberty International Airport, John F. Kennedy International Airport, LaGuardia Airport and Minneapolis-Saint Paul International Airport. He also adds that, although not ready to give details, AtYourGate will follow with an even more “robust, rapid expansion coming later this year” that will — it is hoped — create a presence in the Pacific Northwest, followed by operations in all major airports in the United States and Canada. That official announcement is expected in mid-February.

“This time last year, we were in zero airports,” said Mastracchio, who hails from New York. “Today, we have 40,000 downloads and we’ve delivered close to 16,000 meals so far.”

The company won a bid from the San Diego International Airport, and was one of the first ones to go through the Airport Innovation Lab.

The lab helped the company with branding, and thinking through the details of working in an airport, such as how to keep food warm when making deliveries among terminals. The airport also gave AtYourGate the idea of allowing travelers to pre-order food that could be delivered to them when they reach their gate.

Although AtYourGate has been well-received so far, it wasn’t easy to get the service-facing app up and running. Mastracchio says restaurants were cautious at first and needed to be swayed through time and distance studies and temperature control studies to prove the service was effective. Once convinced, he says he faced many obstacles in order to get AtYourGate, founded in 2015, in government-run airports. There are a series of hurdles you must cross, he says, including first getting a contract with each airport, and then, negotiating with concessionaires, each of whom own a handful of restaurants inside the airports.

“We have been successful in being able to get concessionaires to work with us,” said Mastracchio. For example, SSP America Inc. manages a number of the food places in SAN, including Panda Express and Qdoba. For Mastracchio, snagging the former at the San Diego airport was a big deal, as it was the biggest chain AtYourGate was working with this time last year.

AtYourGate has its own staff of about 50, all of whom go through extensive background checks, including fingerprinting. Once badged, the employees receive uniforms, which include bright blue tops and black pants, and they can then begin to deliver to clients at the gates.

The way it works is passengers, as well as airport employees, make their food and/or product orders (the service can also deliver things like headphones and last-minute gifts) on the AtYourGate app, and the delivery person brings it to them within 20 to 30 minutes. Each delivery has a $2.99 fee and AtYourGate is paid a commission from the restaurants.

“We get paid from the passenger, and then we pay the vendors back,” said Mastracchio, adding that AtYourGate works with Golo, an on-demand delivery platform, and Paysafe Group, an online payment company. “We take a fee out and then the rest goes to them.”

Mastracchio says that when not making deliveries, employees are out marketing. This happens through the monitoring of flight delays and then going to those gates and seeking out potential clients, including families with small children, who may want to enjoy food and refreshments but don’t want to leave their location. He says that AtYourGate does a lot of signage, digital marketing and has a “massive presence” in wallscapes at the airports.

According to Mastracchio, who previously worked as senior vice president of PSKW LLC, a marketing platform that connects pharmacies, prescribers and patients, the airports don’t mandate the hours that AtYourGate operates. It all depends on the size of the airport and how busy it is and it takes a number of months to finalize each airport’s hours. In San Diego, for example, AtYourGate’s hours are 7 a.m. to 10 p.m. In Newark, the service runs from 8 a.m. to 9 p.m.

Mastracchio also adds that before AtYourGate launches at a new airport, a team of the company’s executives spend 90 to 100 days at the location in order to interview, hire and train employees. Staffing has been relatively easy, mostly because AtYourGate looks for people they feel have the energy, professional background and overall personality for the job. This includes college students, former hotel employees and those that have worked as restaurant hosts.

As AtYourGate continues to grow, the goal remains the same: to connect travelers to hot meals in the era of the on-demand economy.

“There are a lot of gate huggers,” said Mastracchio. “They have their phones plugged in and they don’t want to leave the area. We are not carnival barkers — we are not harassing passengers. But, we show up at ticket counters for flights that may be delayed or for crews that are turning around and very proactively try to become a fabric of the airport.”

They are, in essence, he says, problem-solvers.