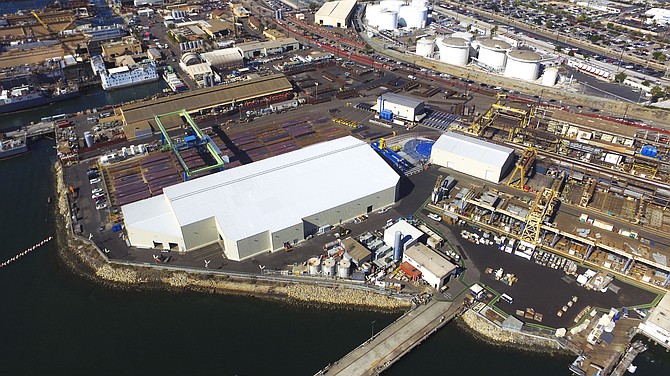 The Barrio Logan shipyard made the addition as it begins to build a series of fleet replenishment oilers for the U.S. Navy. At least six oilers are planned, and the Navy will likely buy more. NASSCO also builds commercial ships, though the market is limited.

Part of the panel line is housed in a new building at the northwest corner of the shipyard. The building takes up 71,000 square feet, an area larger than a football field.

The General Dynamics (NYSE: GD) subsidiary did not disclose how much it spent on its capital improvements.

The new panel line enables distortion-free welding of plates as thin as 5 millimeters. Managers built it with an eye toward producing lighter, more energy efficient ships. The facility uses hybrid laser arc welding and numerically controlled robots to mill, seam and weld steel panels in a highly automated production line. According to NASSCO, the features will improve capacity, quality, accuracy and cycle time — and are expected to double steel processing rates.

“Our team scouted thin plate welding technology and processing facilities from around the world to identify the components that would allow NASSCO to stay at the forefront of shipbuilding manufacturing technology,” said NASSCO President Kevin Graney in a statement released by the company. “This facility, the only one in the world with this unique combination of technologies, is already beginning to transform our business while reducing energy consumption and emissions.”

NASSCO is currently building two container ships for Matson and two Navy auxiliary ships: an expeditionary sea base and the first of the oilers.

Oilers rendezvous with the Navy’s fighting ships to refuel them.