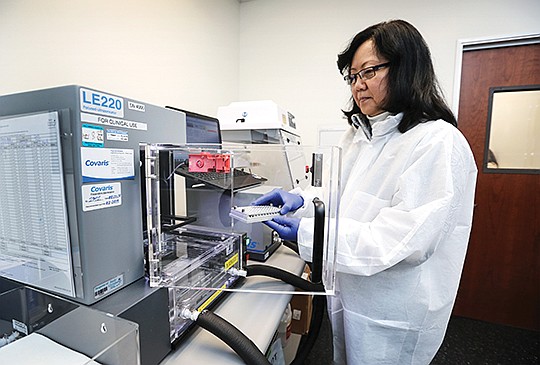 It was one for the record books.

Researchers at Rady Children’s Institute for Genomic Medicine last February decoded a newborn’s genome in 19.5 hours. The feat set a “Guinness World Records” for fastest genomic diagnosis — and pointed the way for quickened diagnosis of sick newborns with perplexing cases.

Genetic diseases are the leading cause of death in infants in North America, affecting an estimated four percent of newborns, and accounting for about 15 percent of admissions to children’s hospitals. Rady’s sequencing technology can screen a blood sample for thousands of diseases, doing away with unnecessary tests and saving time.

Rady Children’s is a 524-bed hospital. In capturing the record, its institute drew on expertise and technology from San Diego-based Illumina, including its NovaSeq 6000 sequencer, one day expected to usher in the $100 genome test. (Currently the average test cost is $1,000, but cutting-edge sequencing like at Rady’s runs more.) For perspective, in 2000 the cost to sequence a genome stood at $100 million.

Edico Genome, which Illumina acquired last spring for $100 million, contributed data analysis and interpretation tools. Other companies and scientists pitched in too.

Doing high-end sequencing in under a day marked a milestone, in what used to take weeks.

The 45-employee Rady institute has medical geneticists, bioinformaticians, software engineers, clinical laboratory scientists, genetic counselors and physicians. This was the second time Stephen Kingsmore, the president and CEO of the institute, earned a world record.

In 2015, he set the prior record of 26 hours while at Children’s Mercy Hospital in Kansas. He envisions exporting the Rady institute’s workflow, with an eye toward making pediatric genomic medicine routine.

As of September, Rady had performed whole-genome sequencing — examining an entire set of DNA — on 1,200 children. It began using the technology in 2016, which has revealed a diagnosis in 34 percent of children, enabling life-saving treatment adjustments in 70 percent of them.