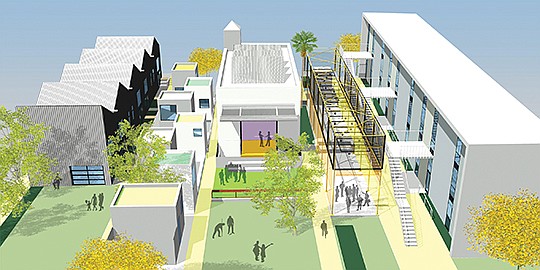 A $9.8 million San Ysidro project by Casa Familiar would include affordable housing and a renovated church that will become a neighborhood performing arts center. Rendering courtesy of Estudio Teddy Cruz + Forman

A 92-year-old former San Ysidro church will be resurrected as a neighborhood theater as part of a mixed-use project that includes affordable housing and classroom space for the UC San Diego.

Renamed El Salon, Our Lady of Mount Carmel Church will be at the heart of the nearly $9.8 million project dubbed “Living Rooms at the Border” by Casa Familiar — a San Ysidro social service agency that is developing it.

“We designed the project a long time ago just as a dream, really, with Casa Familiar because we wanted to forward the idea that border neighborhoods like San Ysidro can be incredible,” said architect Teddy Cruz of Estudio Teddy Cruz + Fonna Forman.

“It’s been a long time in terms of the evolution of this project,” Cruz said. “The reason we kept at it is because it is such an important element in the history of the community.”

In the planning stages for the past 15 years, construction started in December with a formal groundbreaking on the West Hall Avenue site and is expected to take about a year to finish.

“We are proud to be able to execute on an innovative model that is inclusive of small economics that support community needs and much needed housing through a design that embraces community,” said Lisa Cuestas, Casa Familiar CEO.

Founded in 1973, Casa Familiar has developed and invested in several other affordable housing and mixed-use projects in southern San Diego County and operates five community service centers that provide recreation, education, and job training among other services.

Living Rooms at the Border is designed to be part of a network of pedestrian alleys to create walkable corridors through San Ysidro and as an example of what Fonna Forman of Cruz + Forman said was “a new way of thinking about redevelopment that can be community driven.”

The theory is that affordable housing in low-income neighborhoods such as San Ysidro must be linked to economic, education and social programs.

“It’s housing, but also social and cultural programming,” said Forman, a professor of political theory and founding director of the Center on Global Justice at UCSD.

“Affordable housing in neighborhoods like San Ysidro cannot exist on its own just as units of housing,” Cruz said. “This housing has to be embedded in a network of social support.”

Restoring the vacant church is at the center of the project.

“The nice thing about that building is it’s such a community icon. It was the first Catholic church built in San Ysidro,” said David Flores, Casa Familiar community development director.

“This is such a relevant space to the community where a lot of people had celebrations, from people getting married to having their first Holy Communion,” Flores said. “It will continue to be used as a community space.”

As part of the restoration, the building will be equipped with sound and music recording studios and will give Teatro Mascara Magica “a space where they can call home,” Flores said.

“They have been going from theater company to theater company, trying to put together two or three play seasons,” Flores said. “They’ve always dreamt of having a home.”

Along with presenting their own performances, Teatro Mascara Magica will train young people in the theater arts.

“We hope that we can interest young people in that theater world and business,” Flores said.

Additional educational programs will be offered in the open-air pavilion adjacent to the church.

“What we anticipate is that many more programs at UCSD from public health to engineering programs will actually be working in the neighborhood on concrete projects,” Forman said.

Among other things, Forman said the university will offer a variety of internship programs at the site.

“We see that as a really strong collaboration that will really open the door for San Ysidro to connect to the different schools at UCSD,” Flores said.

Two smaller buildings to be erected next to the church will provide office space to expand immigration services offered by Casa Familiar, Flores said.

The two affordable apartment buildings will form bookends to the project, with one on each side of the project.

The apartments are earmarked for people earning 70 percent or less of the median income for San Ysidro, which Flores said is about $30,000 for a family of four.

Cruz said neighborhoods such as San Ysidro have often been overlooked by developers who focused on large-scale affordable housing projects.

He’s hoping Living Rooms at the Border will offer an alternative others will emulate.