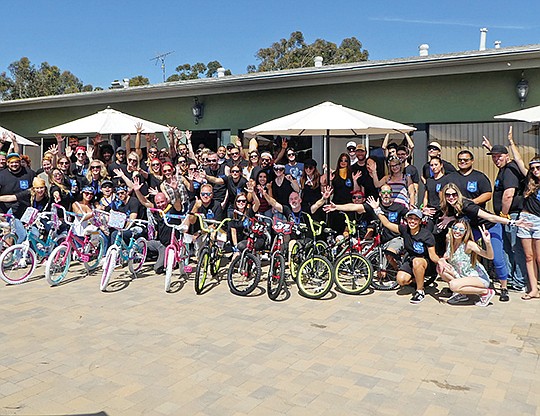 San Diego-based Mirum Agency hired Where You Want to Be, a local company that creates unusual team building activities and experiences for businesses, last year for an end-of-year event that included 130 employees. Photo courtesy of Mirum Agency 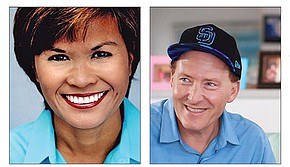 The days of painting a park fence or volunteering at a soup-kitchen as a way of enhancing social relations and creating a healthy work culture are changing. Instead now, more and more corporations are engaging in unusual team-building activities in hopes of further increasing employee retention, promoting communication and overall productivity within a work environment.

Darlynne Reyes Menkin, co-owner of Where You Want to Be (founded in 2003) and Out of the Ordinary (established in 1996), two San-Diego-based companies that offer uncommon team-building activities and experiences to other businesses, says the company’s hope is to help employees relieve stress, unplug and unwind while participating in something different and exciting.

“We want to take you to a better place,” said Menkin, who owns the company with her husband of 28 years, Marc Menkin. “We live in a time that is stressful. People are busy, between work and family, and we are always going in different directions, with tight deadlines and things. We hope that when you are with us, that you feel like you are exactly where you want to be, hence the name. We want you to unplug and unwind and experience the beauty that San Diego has to offer.”

An activity, such as a cooking showdown, scavenger hunt, or an outdoor obstacle course, with the Menkins’ companies costs between $30 and $55 per person, depending on the size of the group and the activity, according to Marc Menkin.

The company’s revenue was $442,000 in 2018, and the Menkins predict growth approximately 5 percent in 2019. Some of their larger local clients include Qualcomm, Illumina and Kaiser Permanente, among others.

According to a 2017 article on the Museum Hack website, a New York-headquartered company that offers museum tours, “team building is a great way to boost employee engagement, morale, and show employees you care about their well-being.” The same post cites a study by Kenexa, an IBM company which provides employment and retention services for hiring and retaining workers. The examination of 64 organizations, in part, revealed that companies with highly-engaged employees achieve twice the annual net income than those businesses whose employees lag behind on engagement.

“In order for a company to be successful, it needs a strong foundation, and for that you need a team working in sync and going in a similar direction,” she said. “One way to do that is through team-building: get your employees out of the office, get them talking and get them to have fun together. All of a sudden, you find out something about someone you didn’t know. Maybe you didn’t realize your co-worker had four kids, or one person is getting married, or the other is a musician over the weekend. That can make you come together through mutual interests as a team.”

“Team-building exercises can encourage collaboration and teamwork, improving performance on workplace projects, fostering bonding amongst employees, thereby improving organizational commitment and lowering turnover costs,” she said. “Team building has been shown to improve morale, creating a culture of understanding, trust, and fun in the workplace.”

Hertz adds that novel and innovative approaches to team-building are becoming more and more popular because, comparatively-speaking, the more traditional alternatives can be stale and flat-out boring. She cautions, though, while unusual team-building activities may be more exciting, companies need to be mindful of discrimination and exclusion. For example, whitewater rafting might sound like an exciting team-building adventure, but, for employees with disabilities, who are pregnant or who are older, this can have the reverse effect, she says.

“In order for team building to be effective, the activity must be novel and challenging,” she said, “and as employees become accustomed to the traditional exercises, they lose effectiveness. Companies are trying many unusual and alternative approaches to team building in an effort to keep employees engaged.”

Jenny Clayton, executive assistant at San Diego-based digital marketing company Mirum Agency, who is in charge of all team-building events for the 130-staff business, says she turns to unusual team-building these days in order to help foster relationships within the team.

“I think relationships in our office are so important because, traditionally, we have a fun in-house culture,” she said, adding that she worked with Where You Want to Be just last year and plans to hire the company again in 2019. “This is a good way to get out of the office, let loose and see a whole other side of your co-workers and colleagues. I usually pair people with those that are not in their team so they are forced in a relaxed and fun environment to make new friends and talk to someone they haven’t done so with before.”

In a 2016 article in Forbes titled “How Companies Like Uber, Facebook and Salesforce Engage in Team-Building,” Jenny Gottstein, director of games at The Go Game, a San Francisco-based unusual team-building company, says millennials are driving the shift in team-building culture.

“We’re seeing companies use their strong corporate culture as a bargaining chip to recruit the best and brightest talent,” she was quoted as saying. “When applying for jobs, millennial employees are not only assessing their salary and benefits, but also whether or not they relate to the working environment and enjoy rolling up their sleeves next to their peers. As a result of this culture shift, team-building is being used as a marketing and recruitment tool.”

Despite research that shows team-building is worth the expense and is also effective, there are naysayers. A recent article in the Harvard Business Review says:

“Most corporate team building is a waste of time and money. I say this based on my 25 plus years of research and practice in the field of team effectiveness,” writes Carlos Valdes Dapena. He gives examples of elaborate activities that failed, miserably, like a marketing executive who was flown to London with 20 colleagues and taught to do a traditional war dance, only to have the division sold off months later.

“Events like these may get people to feel closer for a little while; shared emotions can bond people. Those bonds, though, do not hold up under the day-to-day pressures of an organization focused on delivering results,” Dapena adds.

But Darlynne Reyes Menkin plans to stick to the script.

“Studies show that the happier employees are, the better run the operation will be,” she said. “If we want team productivity and a well-oiled machine, we have to engage folks. What better way to do that than get out of the office and show them a good time?”