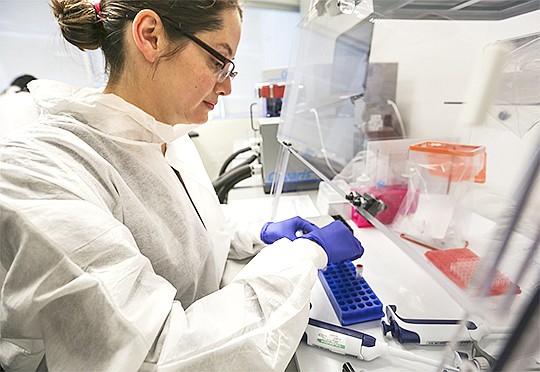 Zaira Bezares, a clinical laboratory scientist at Rady Children’s Institute for Genomic Medicine, works in the lab. Rady is at the center of a Medi-Cal pilot covering rapid sequencing of critically ill newborns. Photo by Jamie Scott Lytle. 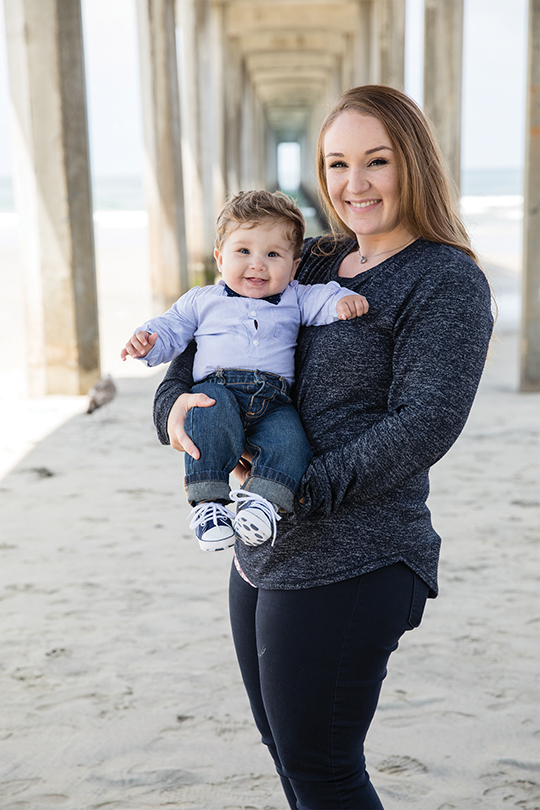 Kara Coltrin and her son, Maverick. She credits rapid genome sequencing at Rady with saving his life. Photo courtesy of Jenny Siegwart/Rady

This pilot — called Project Baby Bear — could one day prompt government and private insurance coverage for these tests among babies with perplexing cases.

San Diego is playing a leading role in a push for wider insurance coverage of genomics, critical for broader adoption in clinical settings. Besides Rady, giant genomics company Illumina is vying to clear a path for insurance reimbursement of specific tests.

“San Diego is setting the way for the rest of the country because of the fact that you have Rady, Illumina and so many trained geneticists here,” said Robert Kaplan with consulting firm Torrey Pines Health Group.

In addition, new companies at the intersection of insurance and genetics are emerging locally.

The state earmarked $2 million for Project Baby Bear, part of Medi-Cal, a health coverage program for low-income Californians. Rady is at the center. It will deploy quick-turnaround sequencing as a first-line diagnostic among 100 sick newborns enrolled in Medi-Cal at Rady Children’s and three other hospitals in the state.

Time Is of the Essence

For babies in critical condition admitted to neonatal care, time is of the essence. But some don’t have pronounced symptoms. Complicating diagnosis, random genetic mutations can cause a disease unique to the infant, not something a parent passed down.

Project Baby Bear builds on earlier Rady’s research on high-end, whole-genome sequencing, which delivers results in days while standard genetic tests can take weeks. The idea is to reduce not only suffering, but expensive tests, surgeries and time in the hospital. 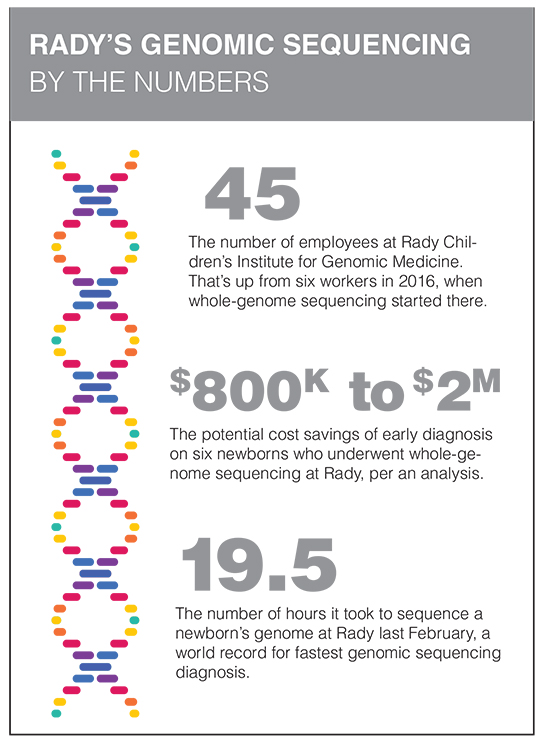 Rady’s Genomic Sequencing By The Numbers

Treatment significantly changed for 13 newborns. Eleven of them potentially avoided serious medical issues, while survival chances shot up for one, according to a paper published in NPJ Genomic Medicine.

Such numbers led to the pilot program. Project Baby Bear is examining whether to bring whole-genome testing for perplexing infant cases to wider Medi-Cal.

Medi-Cal coverage, in turn, would warm up private insurers to newborn whole-genome sequencing. This type of sequencing looks at a person’s entire set of DNA, while another kind, whole-exome sequencing, reads only about 2 percent of the genome.

“We really hope that this pilot study provides a template, an evidence base and a springboard to push genome sequencing over the line for more widespread reimbursement,” said Shimul Chowdhury, the genome institute’s clinical lab director.

That’s not to say change will happen soon.

“Just as in coverage for AIDS years ago, it took a long time to get insurers to cover the drugs that were needed because insurers always want extensive proof of efficacy,” said Kaplan, of the Torrey Pines Health Group, who has advised Rady on the reimbursement outlook.

Another barrier: Insurers may see the benefit of rapid sequencing in sick infants, but fear setting a precedent for these tests in the wider population.

So said economist Scott Grosse and Lauge Farnaes with Rady in an analysis of the insurance landscape of infant rapid genome sequencing, which appeared in the August publication of Genetics in Medicine.

On the flipside, the Centers for Medicare & Medicaid Services recently set benchmark pricing codes for whole-genome sequencing, laying the groundwork for reimbursement.

Illumina has put its muscle behind coverage of whole-genome sequencing. It’s not the first time Illumina has aligned with Rady. Last year, the company, hospital system and others captured the world record for fastest genomic sequencing diagnosis. It took only 19.5 hours to sequence a newborn’s genome, which previously required a day or more.

“Early, accurate diagnosis can change a patient’s life through the right interventions and therapies,” Illumina said in a statement.

In the past, the company didn’t concern itself too much with insurance reimbursement. But that’s changed with its customer base shifting from lab researchers to diagnostic and clinical companies, said an analyst.

“Especially over the last year, Illumina recognized the importance of insurance coverage, all the way from oncology to noninvasive prenatal testing,” said Leerink analyst Puneet Souda.

Prenatal testing is the focal point of a pioneering study overseen by Illumina and insurer Harvard Pilgrim Health Care.

Normally, noninvasive prenatal testing, or NIPT — a screening to pinpoint a baby’s risk for genetic disorders — is only covered in high-risk pregnancies. But the two-year study looks to prove NIPT would also benefit a typical pregnancy, without breaking the bank.

Illumina seems confident: The company agreed to cover part of Harvard Pilgrim’s costs should they increase. But if the study hits its targets, Illumina will have a shining example to hand to insurers.

The company, according to Souda, is undertaking such studies rather than its customers each doing so. 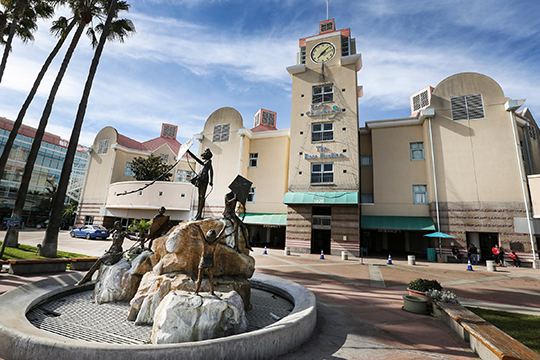 The outside of a pavilion at Rady Children’s Hospital in San Diego, which has embraced genomics. The hospital is at the center of a Medi-Cal genomics pilot.

“If Illumina’s customers are successful in getting reimbursement for their products, the sequencing market is going to grow,” Souda said.

As another potential way to grow the market, the company in November partnered with Blue Cross Blue Shield Association to identify parts of the country with limited access to sequencing.

On the legislative front, Illumina has backed a federal bill likely to be reintroduced this year called the Advancing Access to Precision Medicine Act. It seeks expanded health insurance of genetic and genomic testing — and to increase the ranks of genetic counselors to make sense of a proliferation of genetic data.

Genetic counselors are viewed as key players in bringing genomics to places beyond biotech hotspots like San Diego.

For legislation, Illumina has more markets to think about than the U.S.

“We work globally to educate government officials on genomics, sequencing and the applications for sequencing,” said the company in a statement.

Genomics bleeding into insurance has given rise to firms with a foot in both worlds. Wamberg Genomic Advisors in La Jolla is one.

“We found there was a need to interpret for both industries,” said CEO Tom Wamberg.

The company specializes in employer genomic programs, not typically covered by health insurance. It also works with life insurers, some of which see genome sequencing as a means to extend life — and thus good for business.

Conversely, some insurers believe predictive genetic tests will drive the healthy away from comprehensive policies, while riskier patients load up on pricey coverage. This could trigger an industry decline. Wamberg believes the fears are overstated.

“If you’re a life insurer, anything you can do to help your policyholder live a longer, healthier life is something you want,” Wamberg said.

He added the life insurance industry has taken more of a shine to genomics than health insurers, which have a shorter span to demonstrate a return on investment.

Safe to say, genomics is remaking insurance. Hospitals too are in for change, if Rady Children’s is any sign.

Its genomic medicine institute has 45 employees, up from six in 2016, when whole-genome sequencing arrived there.