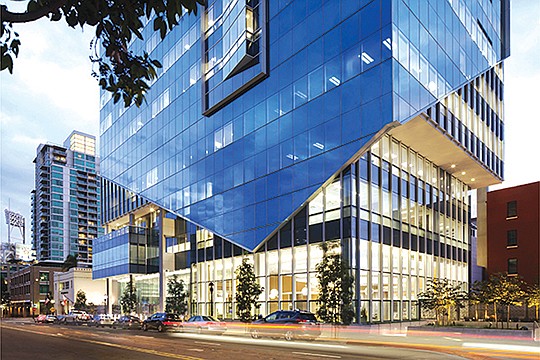 Sempra Energy changed its public face in 2015 with a new high-rise building in San Diego’s East Village. The Fortune 500 company might streamline its business mix in 2019.

Sempra Energy went through several changes in 2018 and could change some more by the time 2019 is over.

The highlights of 2018 included Sempra (NYSE: SRE) closing its deal to acquire a majority stake in Oncor Energy of Texas. Debra Reed retired from the CEO role and Jeff Martin took over. Martin’s vision for the Fortune 500 company was quickly called into question, however, by activist investors who said Sempra should rethink its pursuits and narrow its focus. In September, Sempra signed a cooperation agreement with the investors (affiliates of Elliott Management Corp., Bluescape Energy Partners LLC and Cove Key Management). Shortly thereafter the activists received two seats on the Sempra board.

Sempra plans to focus more on electricity delivery, and made moves on that front in December. It sold a portfolio of solar and battery storage assets to New York’s Consolidated Edison to help pay for its acquisition of InfraREIT Inc. The latter owns electrical transmission infrastructure in several parts of Texas.

The new year will see whether Sempra makes progress toward getting both customers and financing for its liquefied natural gas (LNG) terminal projects. The company could build two new projects and expand a third. The activists have urged Sempra to spin off its LNG export businesses to shareholders as a separate company.

Meanwhile, the city of San Diego will take steps this year to set up a community choice energy plan. The plan, open to neighboring cities, would give customers a way to receive electricity from renewable sources. San Diego Gas & Electric Co., the region’s power provider, is a Sempra subsidiary. Sempra said it did not expect any material impact to financial results because of the move.