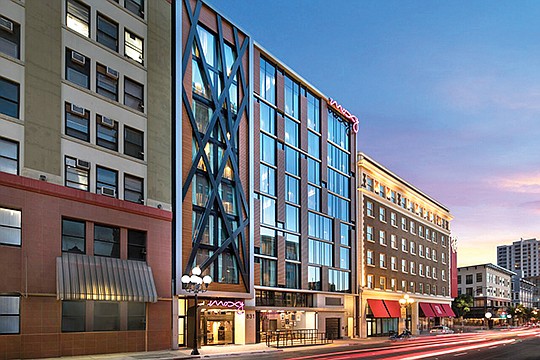 More hotels are coming to downtown San Diego in 2019, with a total of 2,444 rooms expected to come on line throughout San Diego County.

That far exceeds the 1,387 rooms that were expected to be added to the county’s hotel room inventory through the end of 2018, but experts said the surge in new hotel construction will be easily absorbed with no danger that the region will wind up with an excess.

“I don’t think downtown San Diego is even close to being overbuilt,” said Carl Winston, executive director of the L. Robert Payne School of Hospitality and Tourism at San Diego State University.

Hotels slated to come on line in downtown San Diego in 2019 are the 168-room Guild Hotel at 500 W. Broadway and the 239-room Carte Hotel & Suites at 401 W. Ash St., according to the San Diego Tourism Authority.

They follow the 2018 opening of the 400-room InterContinental San Diego Lane Field South at 901 Bayfront Court and the 126-room Moxy Hotel at 831 Sixth Ave.

“San Diego is expected to grow modestly over the next few years,” Lodging Econometrics — a lodging industry consulting firm — said in a December report.

In addition to downtown, Oceanside, Carlsbad and south and east portions of San Diego are the hot hotel submarkets, according to Lodging Economics.

If all the hotels either under construction or planned come to market, 8,716 rooms will be added to the inventory countywide.

“Keep in mind, many of these projects will not get built if they have not yet received financing,” said Robert Rauch, CEO of RAR Hospitality. “Hence, I believe demand will catch up with supply in a few years, especially if the much-needed convention center expansion gets built by 2023,” Rauch said.

A drive to expand the San Diego Convention Center stalled in 2018 when it was ruled — mistakenly — that the measure failed to get enough voter signatures to put it on the November ballot. It is now set to go on the 2020 ballot.