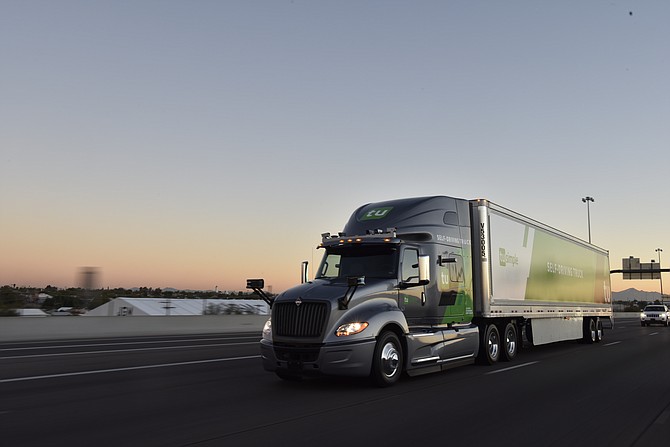 San Diego-based TuSimple makes fully autonomous trucks. The company plans to expand its fleet from 11 to 40 trucks by June of 2019.

Just two years ago, startup TuSimple landed a permit from the California DMV to test its autonomous trucks. Now, after a $55 million series C round, the company plans to hit the gas, by growing its fleet of self-driving trucks from 11 to 40.

TuSimple said the growth was primarily driven by demand from 12 customers, including unnamed Fortune 100 companies. Currently, the company makes three to five trips per day for its customers through three routes in Arizona. The company plans to add an additional route from Arizona to Texas in 2019 — all fully autonomous.

"Exactly one year after debuting our prototype system at CES 2018, we're now running up to five commercial trips a day in Arizona, expanding our fleet and moving quickly toward our goal of creating the first commercial self-driving truck," Dr. Xiaodi Hou, founder, president and chief technology officer of TuSimple said in a news release.

TuSimple has offices in Beijing, San Diego and Arizona. The company hosts its research and development teams at University Towne Center, where it had about 30 employees as of 2017.

The company also announced partnerships with major trucking suppliers on Jan. 7. For example, TuSimple will work with engine-maker Cummins Inc. to integrate its autonomous technology with the powertrain, the components of the truck that generate power and deliver it to the road.

“We are making tremendous progress towards the commercialization of our technology and trucking ecosystem with key Tier 1 partners like Cummins. The viability and power of our autonomous truck solutions is being proven daily on highways and local streets,” Hou said.

To date, TuSimple has raised a total of $83 million in investment, including an $8 million series A round, $20 million in series B funding from NVIDIA, and $55 million in a series C round led by Composite Capital.

CLARIFICATION: This story has been updated to clarify the total amount of funding raised to date by TuSimple, $83 million.