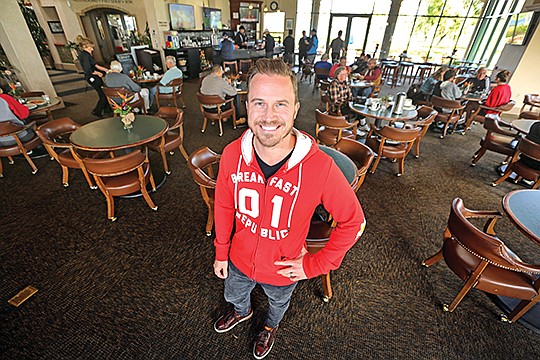 Johan Engman acquired the former Coronado Bayside Grill in September and ran it as-is through the end of the year before shutting down for three months for a full rebranding and remodeling. Photo by Jamie Scott Lytle. 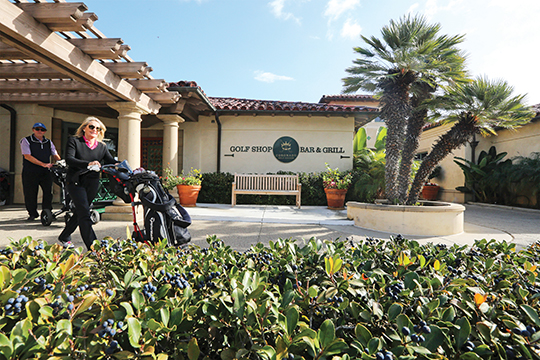 In April, the former Coronado Bayside Grill location is set to reopen as Feast and Fareway Golf.

The sun is shining on Rise & Shine Restaurant Group … now.

A decade after opening his first restaurant in Pacific Beach, founder and owner Johan Engman today owns over a dozen restaurants throughout Southern California. This includes seven locations of Breakfast Republic and three Fig Tree Cafe, and the two non-breakfast/lunch concepts: El Jardin at Liberty Station and the former Coronado Bayside Grill at the Coronado Municipal Golf Course. Engman decided on a breakfast and lunch concept because he felt it was a highly neglected sector of the food industry.

Engman created Rise & Shine Restaurant Group in 2014, the umbrella company that houses and oversees all of his properties. Since 2015, Rise & Shine has increased its $5 million revenue to nearly $23 million in 2018. In 2019, Engman will open three more Breakfast Republic spots, all of which are currently under construction in Irvine, Mission Valley and Costa Mesa — in order of completion. He forecasts the company will garner about $33 million in revenue next year.

There were dark days for the founder.

In 2008, Engman, now a 37-year-old businessman, said he was on “survival mode.” He had put together around $50,000 through working various restaurant jobs, including dishwasher and busser, and a loan from friends and family to open Fig Tree Cafe in October 2008 — during the recession. Loved ones pleaded with him to close the unprofitable restaurant, concerned Engman was overworking himself just to keep the lights on. The Swedish transplant persevered.

“If I were to have closed the restaurant, it wasn’t just me closing my restaurant, it was me giving up on my dream,” said Engman, who didn’t attend college and found a calling in the food industry in his teens.

Sticking to his guns paid off. After running the Pacific Beach Fig Tree Cafe for three years while waiting tables at night and working in the accounting department at a pharmaceutical company a couple of days a week, the restaurant finally began to turn profit.

“I had rather worked my * off and not taken a day off forever just to have a chance to see my dream come to life,” he said.

El Jardin, which was voted the No. 8 best new restaurant in the United States by Esquire magazine in 2018, opened in July.

The former Coronado Bayside Grill was acquired in September and ran as-is through the end of 2018 before shutting down for three months for a full remodel and rebranding. In April, it is set to reopen as Feast and Fareway Golf. Engman says the restaurant’s liquor license will operate all the beverage carts on the golf course, adding that liquor has a bigger profit margin than food and that one of the top-selling beverages is the Rise & Shine bloody marys.

Serving alcohol may be a necessity for brunch spots.

Rashaun Hall, spirits writer and co-host of “The Shot Caller” podcast, with a focus on cocktail and pop cultures, says Rise & Shine’s liquor license is important to the company’s bottom line especially for its breakfast and lunch concepts.

“Without a cocktail, brunch is just a late breakfast or an early lunch,” said Hall, whose podcast is recorded in New York. “Engman’s decision to invest in a liquor license makes total sense. Typically, the more people drink, the more food they’ll order as inhibitions are lowered. This can also lead to more cocktails being ordered. Breakfast Republic’s menu of specialty bloody marys, mimosas and other brunch cocktails are perfect for a Sunday Funday.”

Engman also plans on hosting private events in the Coronado space, which he plans to expand by 3,000 square feet.

Engman says his humble approach and the overall culture at Rise & Shine restaurants are what makes his company prosperous. He says, although his restaurants tend to have lines out the door, he understands popularity isn’t the only thing that a restaurant needs to survive.

“There are great restaurants that have failed for things like food poisoning or sexual harassment — it could be any of those things that are sometimes out of your hands that can shut you down,” said Engman. “I can’t sit here and say that won’t happen, whether I’m super successful or not.”

Engman has taken the analytical route in dealing with the minimum wage increase.

“The minimum wage issue is definitely one of our biggest challenges to combat,” said Engman. “Aside from that, we’d considered adding a surcharge, but, instead of that, we did what we call ‘menu engineering.’ What I mean is you look at every single item, you study it and see what it costs, what the profit margin is, how many we sell and how many we have. As a result, we increased some prices and decreased others. And, we moved some things around in terms of real estate on the menu.” Because the bloody mary is the best-selling beverage, Engman and his team opted to put the item in its own box to encourage it to sell more. “That is one example of combating minimum wage,” he said.

The restaurant group owner knows what pays off in other ways, too. Treating all of his team members with respect, from dishwashers to executives, has been a base rule in running his business. And lastly, he says, the most important part is making sure the food tastes great. Part of the latter is trying to locally source products when possible. Engman says one of the things he is most proud of is the eggs the restaurants use, which he gets from a local family-owned egg ranch in Ramona.

“We can save tons of money by going the cheaper product route, but, the chickens we get eggs from are not cooped up in some tiny, horrendous cage,” he said. “These are happy chickens and our core clients really appreciate that.”

Keeping customers happy is a must. Engman credits the company’s success in that to staying ahead of the game as far as trends in the food industry go. He says there’s been a big demand for vegan options, so, instead of waiting around, he and his team immediately began to test dishes to possibly add to the menu.

Equity Can Be Costly

He also says while he has silent minority partners, the business model moving forward is to retain all ownership, including in the upcoming three new Breakfast Republics. This is as a result of his experience and his knowledge in how money works in the restaurant industry. Engman says: “I rather borrow than get investors, because, in the long run, equity is the most expensive money.”

Today, Engman says he’s proud of his hard work and his relentlessness, which he credits to a “mix of stubbornness and determination.”

“When you have friends that say, ‘it’s a recession, no one will fault you for closing,’ it’s hard not to consider that,” he said. There were times he questioned his own sanity, especially those times he was getting up at 4 a.m., going to the restaurant and then a night job, and, was still losing money.

“That tests your core on all levels,” he said.

But, fortunately he stuck with it.