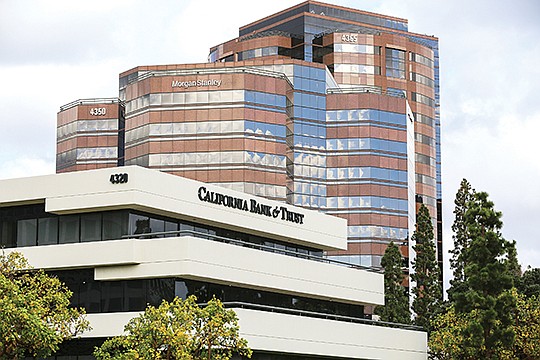 UTC is one of the strongest submarkets in San Diego County for office space.

UTC is one of the strongest submarkets in San Diego County for office space.

Apple Inc. is expected to lease a UTC building owned by the Irvine Co. as it brings more than 1,000 new jobs to San Diego over the next three years, according to brokers and others who are following Apple’s move.

Completed in 2017, the 96,435 square-foot, three-story Eastgate Terrace building at 9779 Towne Centre Drive is vacant and is in one of San Diego’s hottest submarkets for office space and one of the few with large blocks of space available.

Neither Apple nor the Irvine Co. has confirmed the move.

When Apple would move into the Eastgate Terrace building and how much space it would take initially is an open question, but brokers said the result is that other nearby submarkets are likely to see an uptick in demand and corresponding rise in rents as there’s less room in UTC.

According a report issued by CBRE for the third quarter of 2018 on UTC office space, Apple is looking to take 60,000 square feet to start.

Ron Miller, a senior vice president with Colliers International, said that it makes sense that Apple would take less space to start than the company will eventually use.

“It’s not all in one swoop. They (Apple) cannot hire 1,000 employees overnight. It takes time to get the right people,” Miller said. “I would say they would commit to the whole building and go in in phases.”

Miller said Apple could later take up the rest of the Eastgate Terrace building as needed with room nearby to expand.

“You have several buildings adjacent, all owned by Irvine (Co.),” Miller said.

Although the Eastgate Terrace building is brand new, Miller said it’s little more than an empty shell and it will take time to get it ready for move-in.

“It’s going to take probably up to six months once they start moving hammers and nails,” Miller said.

“There’s a decent outdoor area but I imagine they’re going to provide food service and fitness on their own,” Ward said.

Gary London, a San Diego real estate advisor, said that moving into UTC would put Apple in a spot where the engineering and other high-tech people Apple would recruit already work or would like to work.

London speculated that Apple might be out to pick up workers from Qualcomm, which is in nearby Sorrento Valley.

Qualcomm in May announced it was laying off more than 1,000 workers and vacating several buildings in Sorrento Valley.

Some of those buildings remain vacant, but Sorrento Valley and other nearby submarkets could benefit from Apple’s move into UTC as the company eats up space in an already constrained market.

“You’re going to see those close submarkets be a beneficiary of UTC getting even tighter,” Ward said.

Even without Apple, UTC at the end of the third quarter had an overall vacancy rate of 9.9 percent for Class A office space, including space available for sublease, according to CBRE.

By comparison, the UTC vacancy rate topped 20 percent during the worst of the recession, according to CBRE.

For the third quarter of 2018, Colliers International reported that the countywide vacancy rate was nearly 10.7 percent.

Aside from Eastgate Terrace, the other big blocks of space listed by CBRE not including subleasing at the end of the third quarter were 48,353 square feet at La Jolla Reserve, 4435 Eastgate Mall, 44,035 square feet at 4110 Campus Point, and 28,374 square feet at Eastgate Pointe, 9875-9885 Towne Centre Drive.

“Out of the new construction, that (Eastgate Terrace) was the last big piece to be leased,” Ward said.

That could soon change.

Tony Russell, a managing director of JLL in San Diego, said the lack of space and rising rents in UTC have developers planning new projects in UTC.

“They’re going to turn that into a true mixed-use retail/office hub,” Russell said.

UTC has become a hot market in part because of the trolley expansion to UTC, renovation of the Westfield UTC mall, and UTC’s proximity to the UC San Diego and the life science hub that’s been established in Torrey Pines, Russell said.

“All of those fundamentals have put UTC on the map as being an extremely well located location with great quality office buildings with some of the best amenities San Diego has to offer,” Russell said. “Obviously, it has great freeway access with all of the tech-type employees and executives living not too much of a commute from UTC in the enclave communities of Carmel Valley, Del Mar and Rancho Santa Fe. All of those fundamentals have made a lot of the large-scale tech users and life-science companies want to be in UTC.”

UTC also continues to attract financial, legal and medical firms, according to Russell.

Getting a company like Apple to move into UTC also helps San Diego to build a strong employer base for top talent.

“It will help keep UCSD or USD (University of San Diego) students in San Diego versus being exported to the Bay Areas, Seattle, Portland or other areas,” Ward said. “It’s a big story for us and it’s great to see it happening.”