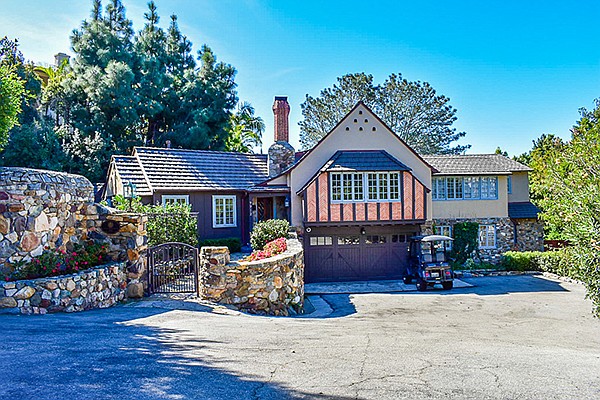 The façade of this home at 7712 Hillside Drive in La Jolla is a distinctive representation of an English Tudor Revival home from the 1930s. Photo courtesy of Berkshire Hathaway HomeServices California Properties 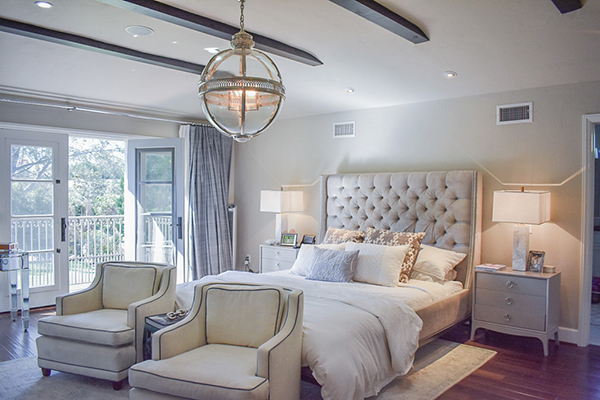 The charming Tudor-style home on Hillside Drive in La Jolla is far removed from the hustle-bustle of the trendy upscale community in the business district below. This is quite a contrast from the time period when the home at 7712 Hillside Drive was built in 1931.

Aerial photos from 1930 show a smattering of homes from the La Jolla Hermosa area to La Jolla Cove. Most of the homes are clustered on the flat land near what is now La Jolla Cove, crisscrossed by a few avenues. The land that sweeps up the southeastern hillside toward the peak of Mount Soledad is all but barren.

It was during this time that the Margaret Rice Robertson house, now listed by the La Jolla Historical Society as a San Diego Historical Landmark No.1023, was built on Hillside Drive.

Ross Clark and Bianca Diaz, Realtors with The Clark Group of Berkshire Hathaway HomeServices California Properties, have the listing on the 4,215-square-foot, five bedroom and five-and-a-half bath home. The listing price is $4.75 million.

Madison Span, director of marketing and client relations for the Clark Group, also contributed to this story.

What is true about the contrast of La Jolla in 1930 with today is also true of the authentic English Tudor Revival home. From the exterior, it’s like stepping back in time. Unlike most other homes on Hillside Drive that are right up against the road, this home is set back on the nearly half-acre property with a generous driveway to its front door and garage. The home has rooflines with steeply pitched cross gable roofs, a herringbone brick pattern flanked by rustic timbers, multilite casement windows, cottage-style stonework and the fanciful original chimney all add to the ambience of the English countryside, not a southern California beach town.

“The previous owners did a very extensive renovation as far as the mechanical, structural, roofing — they really did a multimillion-dollar renovation on it,” Clark said. “Two famous designers from Bravo’s television series “Flipping Out” came down from Los Angeles and did a whole show on it.”

La Jolla-based Grunow Construction was the company that remodeled the home for the previous owner and photos of its work on the home are on its website, grunowconstruction.com. The current owners invested substantially in additional upgrades throughout the home.

Even though everything on the interior was redone, “they (both renovations) had to keep the shell,” Clark said.

As a result, the home was granted the Mills Act tax savings designation because it “embodies distinctive characteristics of the English Tudor revival from the period of 1931,” according to the Historical Review Board’s official document dated Oct. 7, 2011.

“That being said, the Mills Act is almost impossible to get right now,” Clark said.

“You know that the tax laws have changed so you can’t deduct anything more than $10,000 on your property tax; the fact that this house has a Mills Act is phenomenal, that is a major benefit to the owners,” he said.

It’s the best of yesteryear combined with the best of today’s modern amenities and technology.

Madison Span said of the house “honestly, it’s like walking into a magazine, it’s quite stunning.”

Her favorite parts of the home are the kitchen and the family room.

“I love how open the kitchen is, you can hang out with the family and there’s a door that opens to a huge backyard,” Span said. “A huge backyard is kind of hard to find in San Diego, let alone La Jolla.”

The large entertaining area in the side yard has an outdoor kitchen, lounge areas, a waterfall from the spa into the pool and a large enclosed shower and changing room. This structure is clad in stone to match the spirit of the stone used on the exterior

Of the interior Span said “There are lots of levels, which is what I really like about the house.”

Clark said that one of his favorite things is that even though it’s an older house the rooms are quite large.

“My favorite room in the entire house is the master.” Clark said. “There are doors in the master that lead out to a large patio that overlooks the huge backyard.”

The home still retains much of the charm of older homes, Juliet balconies, lots of large spaces interwoven with smaller multipurpose rooms, a downstairs playroom, a large attic with new flooring, lots of places for people to have their own space and to come together.

“I really love this home to be honest,” Span said. “I love going through it.”