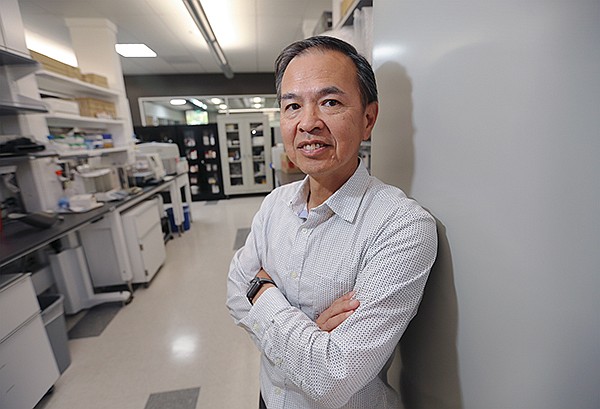 Explora Biolabs founder Richard Lin at the company’s Sorrento Valley facility. The business is among the San Diego contract research organizations that have been acquired. File photo by Jamie Scott Lytle

Recently, Bioduro became the latest San Diego contract research organization, or CRO, to be acquired. Biotech watchers say the pace of consolidation has picked up in recent years, a function of large CROs swallowing up smaller ones to become one-stop shops.

Plus, private equity firms are now chasing CROs, a less risky part of the life sciences industry. And, the local CRO market is maturing.

“Many scientists locally in the mid-2000s started CROs. So it took them a while to grow these companies to a point where they’re a target for M&A,” said Richard Lin, who chairs the CRO committee of life sciences trade group Biocom.

For privately held Explora, the offer was right — and so was the timing. Lin grew the business to five facilities in San Diego and two in San Francisco, but he saw an increasing need for business acumen.

“I’m a trained scientist, not a businessman. In order to take Explora to the next level, I saw we need more business professionals,” Lin said.

CROs handle various parts of drug development — like running clinical trials — on behalf of pharmaceuticals and biotechs. Lesser known, diagnostic and medical device firms turn to CROs catering to those industries as well.

Private equity firms, particularly those testing the waters in biotech, view the CRO industry as something of a safe bet.

In contrast to biotechs prone to boom or bust, CROs often generate steady — and fat — returns. The global industry is forecast to reach $57 billion by 2024, at a 7.4 percent annual growth rate, according to a 2018 report from Market Research Engine.

“If you want to capitalize on the growth of the life sciences industry but you don’t want to take on that much risk, the service sector is a very attractive area,” Lin said.

“As the business cycle gets to mature, people start to think about being more risk-adverse with their investments,” he said. “With CROs, you can predict cash flows for two or three years in advance, and longer for larger CROs.”

Locally, most of the deals in recent years involved a larger CRO buying a smaller one, bolstering the bigger fish’s offerings, in a bid to land larger pharmaceutical clients.

Other than Explora and Bioduro, local CRO acquisitions since 2016 include:

“It’s a chance for newer CROs, or more risk-taking CROs, to offer products and services that the large ones merely by size aren’t able to offer right away,” Kulkarni said. In turn, this makes the small CROs acquisition targets.

Most small CROs in San Diego are in the pre-clinical space, where there’s a lower barrier to entry and fewer regulations. That’s according to Suresh Chintalapati, president and chief business officer of Triangulum Biopharma in Carlsbad, a boutique CRO that designs and analyzes rodent studies for liver and metabolic drug candidates.

“Because of that you see a lot of new CROs springing up every year,” Chintalapati said. He added the brisker rate of CRO acquisitions speaks to “the quality work being done in San Diego.”

Besides consolidation, another local CRO story is playing out: Chinese CROs establishing a San Diego footprint. Chinese firms have realized that most San Diego biotechs are small enough to see outsourcing to China doesn’t make sense.

But it goes both ways. San Diego CROs like Irisys offering in-demand services have expanded into China. The CRO relationship between the two countries seemingly runs counter to the U.S.-Sino trade war narrative.

Marrying the two narratives — consolidation and Chinese-linked CROs — Wuxi entered San Diego by way of acquisition, as noted above.