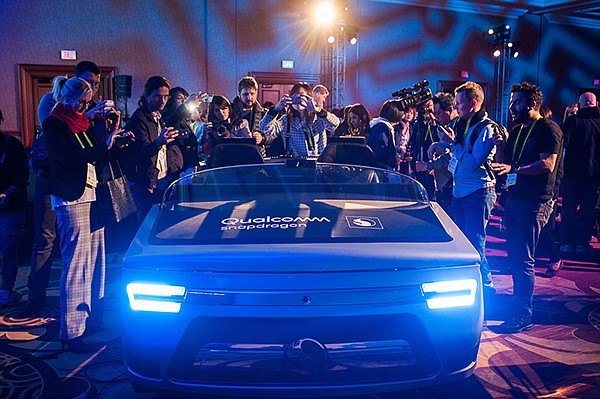 A demo cockpit at the Consumer Electronics Show in Las Vegas shows Qualcomm’s technology. Qualcomm announced it is developing a new Snapdragon chipset for vehicle “infotainment” systems that will be sold in 2021. Photo courtesy of Qualcomm Inc.

Look closely enough, and you might see Qualcomm Inc. testing self-driving cars on its Sorrento Valley campus. The San Diego-based chipmaker acquired a testing permit from the Department of Motor Vehicles in 2017, and converted a vacant parking lot into a roundabout to take its technologies out for a spin.

Company Description: Qualcomm is a semiconductor company that develops the baseband processors used in smartphones and other devices. The company develops and licenses telecommunications technologies.

Qualcomm is best known for developing the modem chips embedded in smartphones, but its chips have been in cars for several years, too. 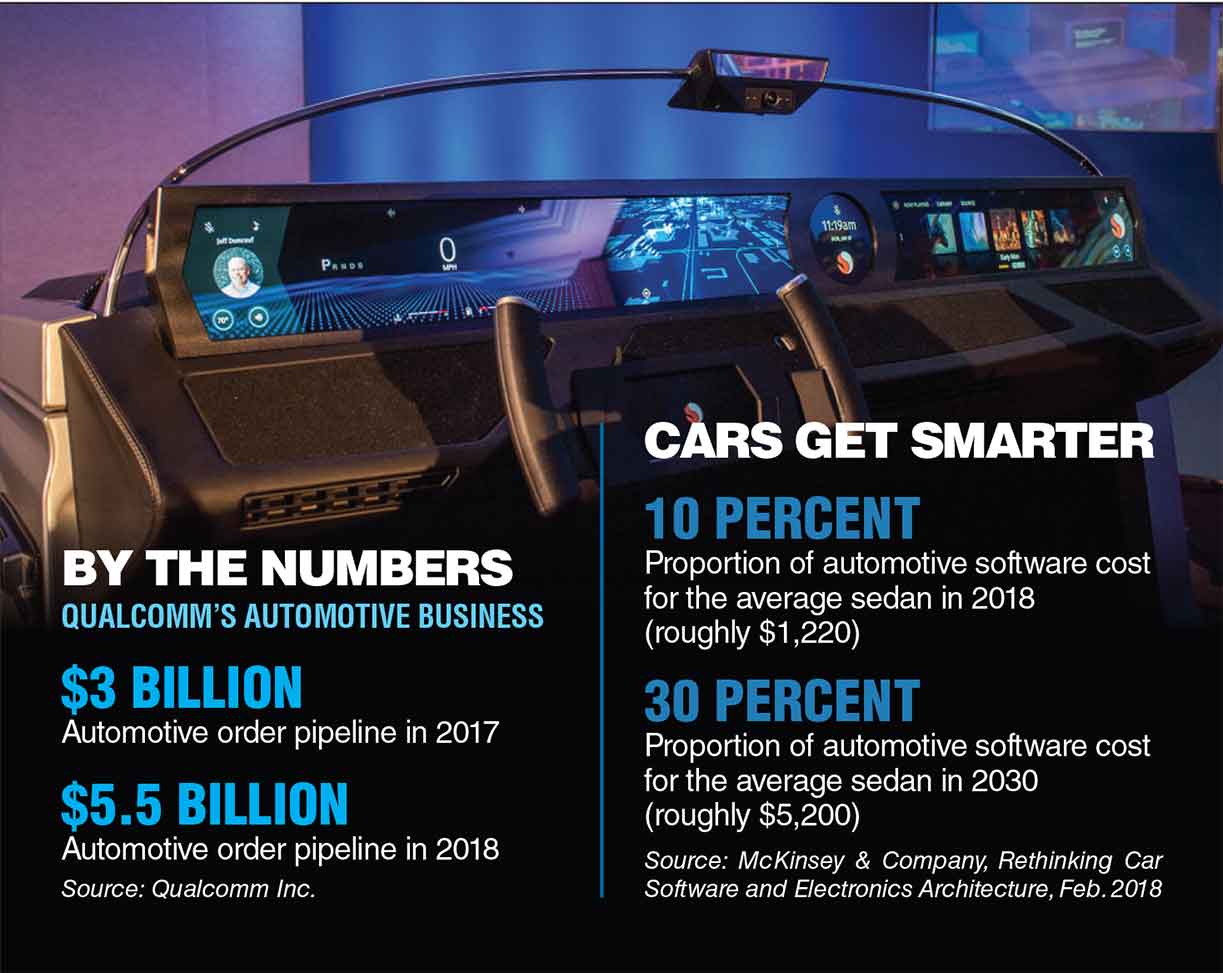 By the Numbers Qualcomm’s automotive business

“Any automaker you can think of, we have business relationships with,” said Jason Ellis, director of automotive business development for Qualcomm. “Automakers, traditionally, have worked with suppliers. Now they view tech as such an important part of their product offerings that they meet with us directly.”

With smartphone sales slowing, and increasing excitement around self-driving cars, Qualcomm and other telecommunications companies are looking to the automotive industry as the next big growth prospect. Nina Turner, research manager for semiconductors at IDC, said the automotive semiconductor market is expected to grow from $41.6 billion in 2018 to $63.4 billion in 2023, accounting for the rise of electric vehicles and autonomous vehicles.

Dollars aside, Turner said the market was attractive because “it’s one of the few growth areas of innovation.”

“It’s one area where people want to expand their digital life. You spend so much time in the car,” she added.

Cell phone carriers, such as AT&T, are looking to add vehicles to their data plans. In addition to mechanical engineers, automakers now hire electrical engineers and computer scientists, Ellis said. The cost of cars is also changing, as software and electronics make up a growing piece of the pie.

For Qualcomm, even though its attempted $44 billion acquisition of NXP Semiconductors struck out last year, the company is still pushing forward with growing its pipeline for its automotive business. The company reported a $5.5 billion order pipeline at the end of 2018, up from $3 billion in 2017.

Since cars take longer to build than smartphones, that means production is likely two to three years out.

“It certainly is a significant expansion of the Qualcomm business,” Ellis said.

Qualcomm first entered the automotive industry when it started working with General Motors’ OnStar in 2002, developing the little buttons on rear-view mirrors that let drivers get turn-by-turn navigation or call for emergency services. Qualcomm has been dominant in the field of telematics ever since, Turner said.

Now, Qualcomm is vying for a space behind the large screens that dominate most vehicle dashboards. The increasingly competitive “infotainment” market puts maps, your favorite podcast, voice controls and backup camera in one system. These sales made up about one-third of Qualcomm’s automotive business in 2017.

At the Consumer Electronics Show in Las Vegas in January, Qualcomm unveiled a new Snapdragon chipset for automakers, the company’s third to date. The new chips are expected to hit the market in 2021, around the same time as commercial 5G.

“The big gains are in infotainment, the driver dashboards. That’s where all of this traction’s coming from,” said Patrick Moorhead, principal analyst for Moor Insights and Strategy. “It’s a big opportunity for growth.”

It’s also an increasingly crowded market, as chipmakers Nvidia and Intel have recently jumped into the infotainment business as well. Moorhead said Nvidia was approaching the market by trying to tweak its chips to be smaller and more power-efficient, while Qualcomm has been focused on designing higher performance chips for the industry.

“They’re coming at it from a different tack,” he said.

At CES, a demonstration with Audi, Ford and Ducati motorcycles showed four vehicles stopping at an intersection. All approached the four-way stop at roughly the same time. For most drivers, this would result in an awkward series of fits and starts, but the vehicles were able to determine who had the right-of-way.

This was a demonstration of Qualcomm’s C-V2X (cellular vehicle-to-everything) technology, which it first unveiled in 2017. The tech allows for low-latency communications between vehicles, pedestrians and infrastructure, without having to bounce signals to a cell tower.

For example, if the driver in front of you slammed on their brakes, your car could alert you or respond accordingly, Qualcomm’s Ellis said. In a roundabout — another intersection many motorists find troublesome — cars could communicate to each other where they intend to exit.

“The information is so timely, knowing a vehicle is slamming on its brakes, you want to share that information locally,” he said. “We’re starting to get into a world where there are more safety systems in cars. We’re trying to do things to proactively limit the number of collisions. We’re also starting to see early work in autonomous vehicles.”

Qualcomm has been testing this technology in San Diego, with SANDAG, the city of Chula Vista and Caltrans District 11. Ford plans to equip its new vehicles with the technology starting in 2022.

“When we started on this over a decade ago, the concept of the way automotive works is very much different today,” Ellis said. “I hope one day my kids will say, ‘What do you mean cars didn’t talk to each other?’”

Startups and software reporter Elise Reuter can be reached at 858-277-6971 or at ereuter@sdbj.com